The felines will soon be headed to a sanctuary in Italy. 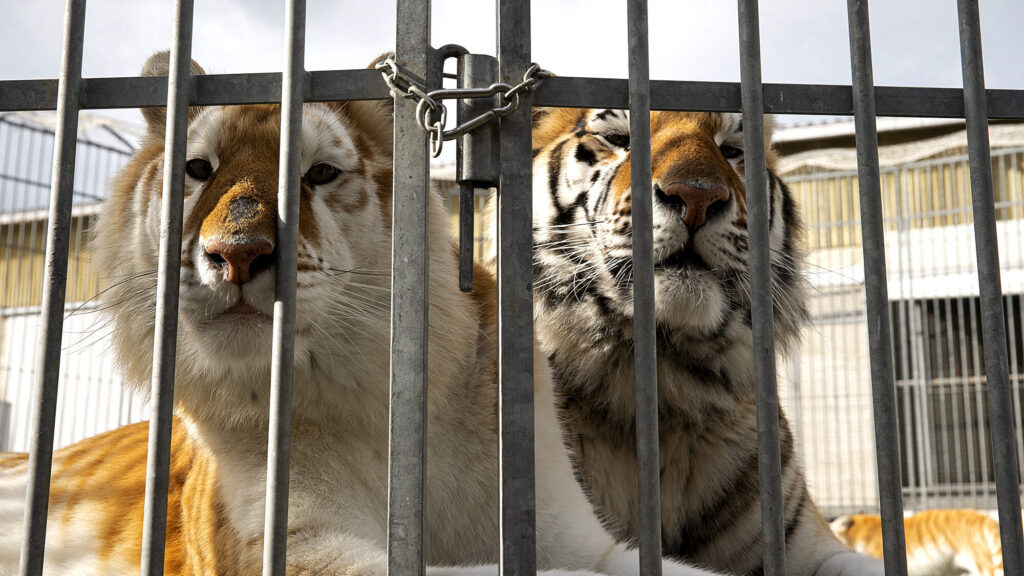 Two of the ten tigers before they were seized from the circus in Beauvais, France. (One Voice/Real Press)

BEAUVAIS, France — Ten tigers trained for the circus and housed together in a small space have been rescued after a nearly two-year investigation.

The felines, owned by animal trainer and circus runner Mario Masson, had been locked in a cage truck described by One Voice as “nothing more than a heavy-duty trailer” hidden in an unused factory. Despite weighing up to 660 pounds each, the animals were primarily kept in the 6.5 feet by 6.5 feet space when not performing, according to the organization.

“After months of uncertainty, this time it worked!” One Voice said in a press release after the seizure. “The ‘10 tigers in 1 wagon‘, as we had called our campaign to save them, has finally ended with them being seized! Since they were born and separated from their mothers, they had known only the road, bars and the whip.”

After receiving medical treatment and health checkups to determine whether they are overweight or suffering from inbreeding, the tigers will be transported to a sanctuary in Italy, where individual dens await them.

Masson, meanwhile, is “already on the run from accusations in the Netherlands of ill-treating” an elephant that recently died under suspicious circumstances, according to One Voice.

Tigers (Panthera tigris) make up the largest species of cats still in existence, growing between six to 10 feet in length. Aside from associations between mothers and offspring, they are mostly solitary animals with high levels of independence. Individual tigers tend to roam a large territory, the size of which is usually determined by the amount of available prey in the area, and can eat up to 80 pounds of meat at once.

Faced with poaching and habitat loss, just two tiger subspecies, the Sunda island tiger and the continental tiger, still live in the wild, mostly across Southeast Asia. Tigers as a species are listed as “Endangered” on the International Union for Conservation of Nature’s Red List, and their overall population in the wild is estimated to be around 3,900 after a century of decline.

Due to dwindling numbers in their natural habitats, the demand for tigers and their parts is growing, fueling the illegal tiger trade across the world. At least 850 tigers are believed to be living in captivity in the European Union and the United Kingdom, while the United States is home to around 5,000 captive tigers, outnumbering those in the wild.