Though the alliance won 112 seats of the 280 seats, India’s ruling party emerged as the single-largest party. 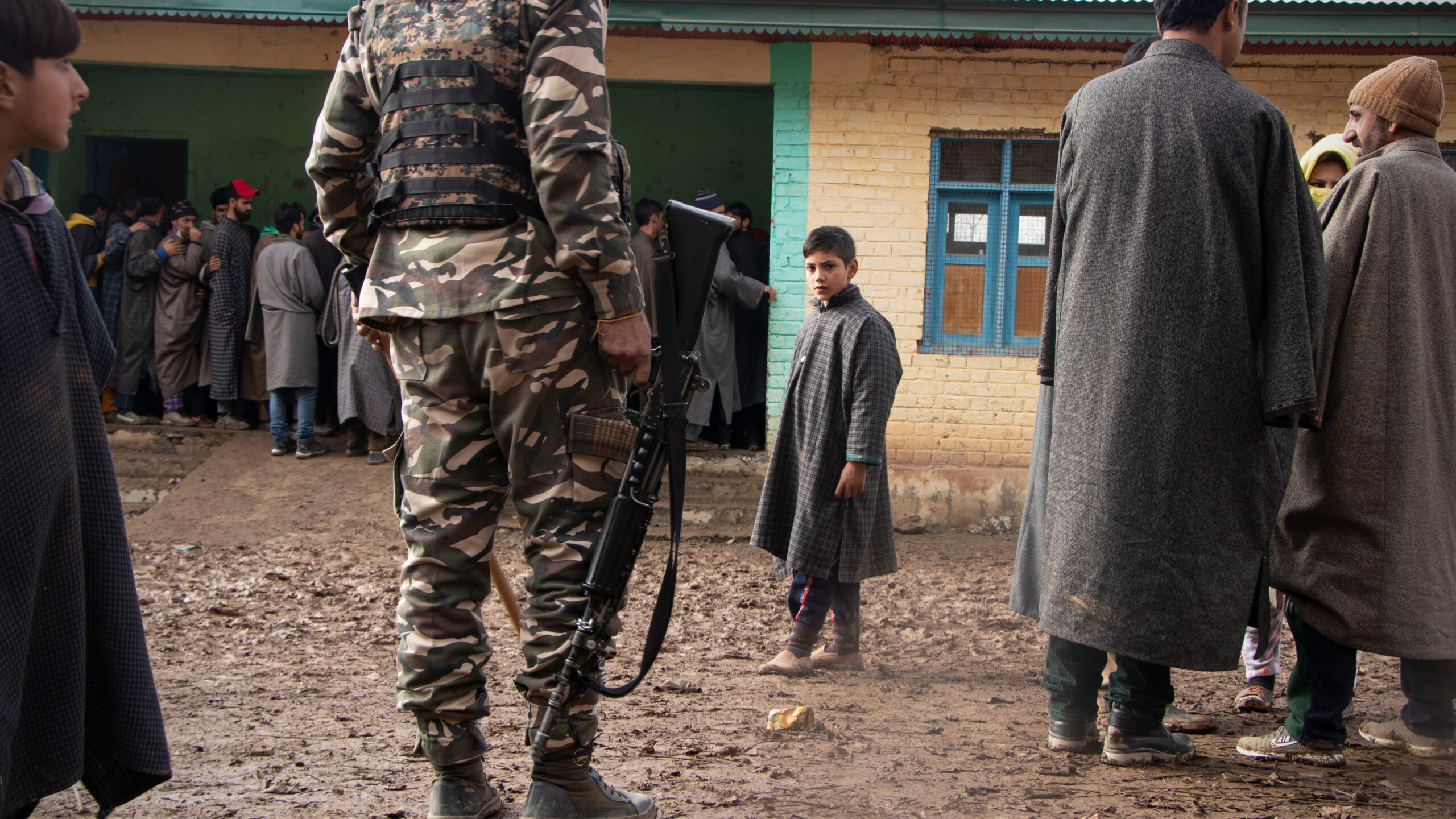 A boy looks at security personnel during the voting process in Kashmir. (Photo Courtesy: Aaqib Fayaz)

NEW DELHI — A coalition of parties demanding the restoration of the special status of Jammu and Kashmir won the most seats in the first elections in the region since the repeal of its special status in August 2019. But India’s ruling Bhartiya Janta Party (BJP) emerged as the single largest party with the greatest vote share.

The People’s Alliance for Gupkar Declaration won 112 of the 280 seats in the state’s District Development Councils across 20 districts.

“We won despite barely doing any election campaigning,” said Dr. Harbaksh Singh, spokesperson for the People’s Democratic Party, a key constituent of the alliance. “While the Bhartiya Janta Party received the support of the administration, many of our leaders were detained and not allowed to move out of their homes.”

The ruling BJP won 75 seats among the total polling at 51.42 percent, taking more seats than the alliance in the Hindu-dominated Jammu region in places such as Jammu, Udhampur, Kathua and Samba.

“We are the single largest party and the results are a slap on the face of those people who supported the special constitutional status of Jammu and Kashmir,” said BJP spokesperson Harish Khurana.

Khurana thinks that the people of Jammu and Kashmir have confirmed faith in their party’s decisions. He dismissed claims that the results indicate a demand for reversing the constitutional changes implemented last year.

Prime Minister Narendra Modi’s government in August 2019 abrogated Article 370 of the Indian Constitution which granted special status to Jammu and Kashmir. The region was divided into two Union territories — Jammu and Kashmir, and Ladakh — to be directly ruled by India’s central government. 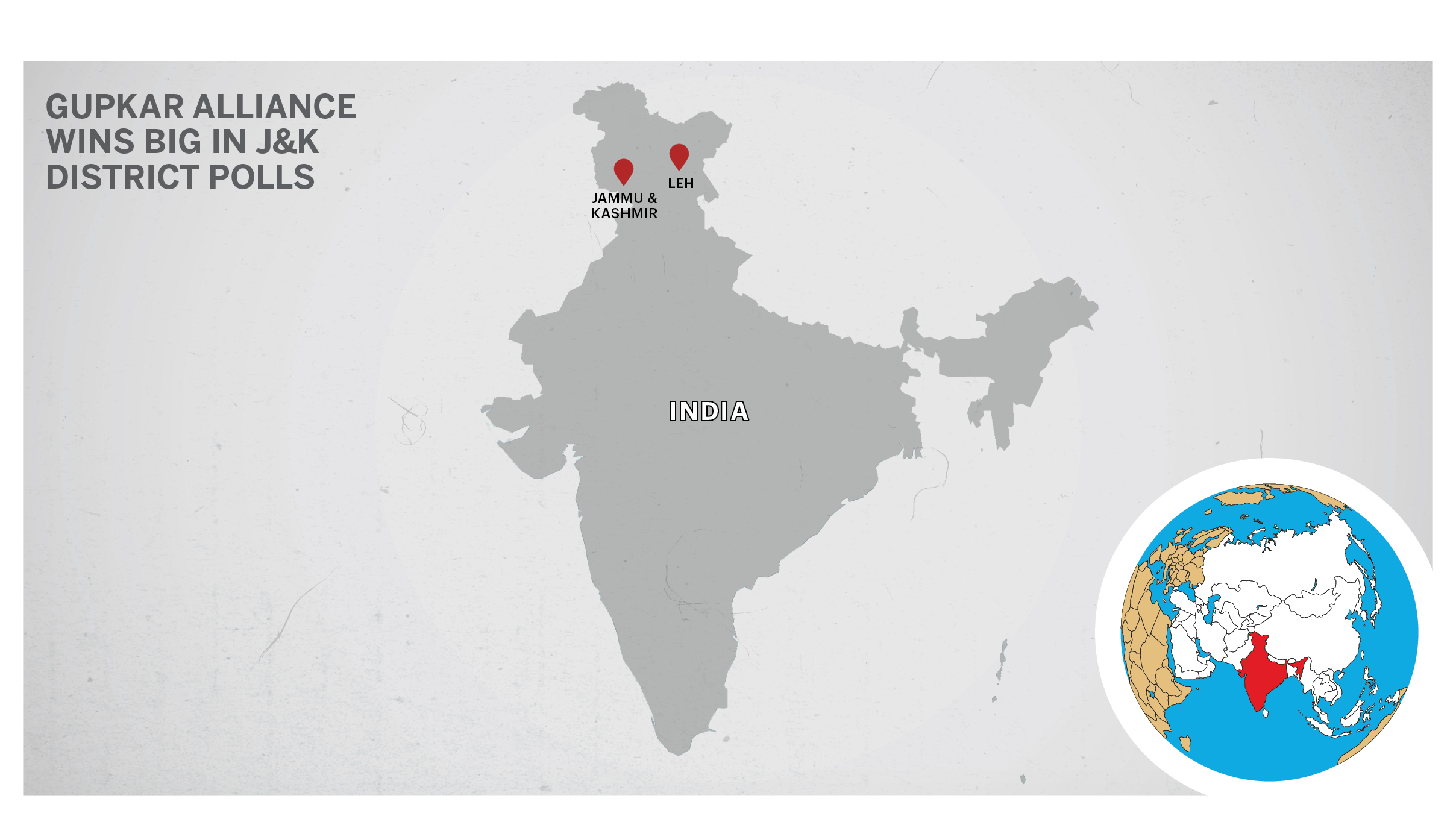 Singh said the election results were a befitting reply to the BJP government, which tried to create a narrative that the revocation of autonomy was a popular decision.

“At this point, we are more concerned with restoring our special status and not fighting elections. The only purpose of fighting this election was not to give a cakewalk to the Bharatiya Janata Party,” said Singh.

The polls were conducted amid tight security in the region, which has seen months of military lockdown and a communications blockade since the abrogation in efforts to thwart protests. The disputed Himalayan region, which is also claimed by Pakistan, still has a ban on high-speed internet.

Earlier this year, India introduced a host of changes to the region’s laws, allowing Indian nationals to buy land in the Himalayan territory for the first time. The move sparked widespread outrage from natives in the conflict-torn region who, until now had permanent residency and property ownership rights.

“It is clear to us that these numbers will not change anything substantial in the region, but it is also an endorsement of our stand. The alliance’s fight is for the restoration of the special status, and it is clear after this mandate that we have got people’s mandate behind us,” Dar said.

The alliance was formed to work toward restoring and safeguarding the special status.

“I voted for the alliance to register my protest against what was inflicted on us last year,” said Mohsin Quyoom Wani, a resident of Hendew village in Shopian. “I didn’t vote only for development, but against the Bharatiya Janata Party and their decisions.”

Members of India’s ruling party believe the participation of Kashmiri people in elections is in itself is a victory of democracy.

“It doesn’t matter who wins or leads, what matters is participation,” said the Union Minister of Minority Affairs Mukhtar Abbas Naqvi.

Some political analysts from the region, however, see the elections as a futile optical exercise by India to depict “normalcy” in the region.

“Despite employing brute force, the state machinery and a huge team of its national leaders, Kashmir remains hostile to the Bharatiya Janata Party,” said Sheikh Showkat Hussain, a political analyst and scholar in the areas of human rights and international law. “The people have rejected the constitutional changes unleashed by them in August 2019.”

Gowhar Geelani, a journalist and author from the region, said: “Despite the choked militarized atmosphere, detention of opposition leaders and activists, suspension of civil liberties and gagging of media, the Bharatiya Janata Party failed to make any mark in Kashmir. There was no level playing field, and yet they received a drubbing. This shows their narrative has failed.”

Geelani said the alliance’s agenda is solely focused on the restoration of statehood and the special status of the region.

“So, in that sense, their victory is a sort of referendum that people want reversal of the decisions taken in August last year.”

Despite assurances by New Delhi that the host of new policies introduced in Kashmir are in the interests of the Kashmiris, people in the conflict-ravaged valley fear the Modi government’s policies are aimed at reducing the power of natives of India’s only Muslim-majority province.

Muslims make up close to 70 percent of the total population of the region, where wide-scale violence has continued since the insurgency against the Indian state in the early 1990s. Over 70,000 civilians and 5,000 Indian security forces have been killed during the past three decades.