Additional charging stations and other infrastructure updates would rev demand for electric vehicles. 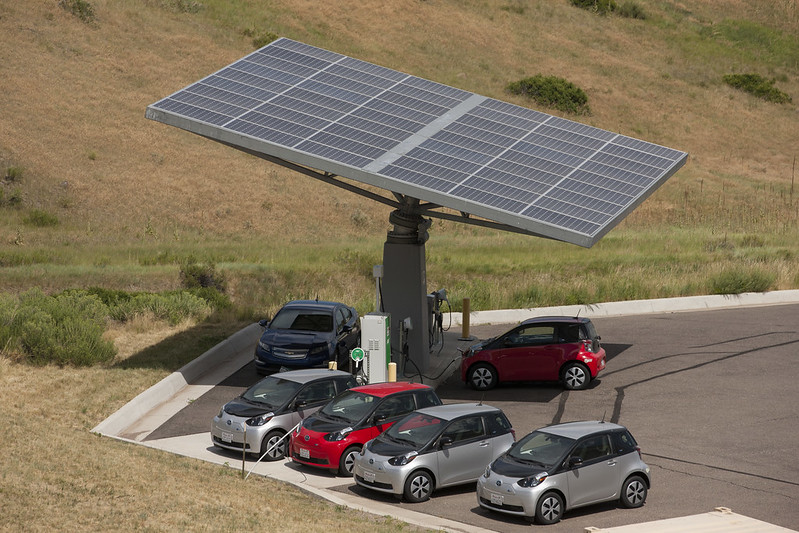 National Renewable Energy Laboratory-owned electric vehicles below solar canopy at the Vehicle Testing & integration Facility, where vehicles are charged with photovoltaic (PV) - generated electricity and can provide backup energy to the grid when PV generation is low. (Courtesy of the U.S. Dept. of Energy)
WASHINGTON — A major energy policy proposal from U.S. President-elect Joe Biden would not only promote new infrastructure that could lead to carbon-emission reductions, it could also boost the numbers of all-electric vehicles on U.S. roads.

During the 2020 presidential campaign, Biden, a Democrat, made addressing climate change a key part of his platform, and on his campaign website, a key element of his clean energy plan is the promotion of electric vehicles (EV). To help spur adoption of such EVs, Biden pledged to build 500,000 charging stations.

“These investments are a key part of Biden’s commitment to reinvent the American transportation system from the factory line to the electric vehicle charging station,” Biden’s campaign website said.

Shortly after Biden’s election, a new lobbying effort formed to promote 100% adoption of EVs by 2030. The membership of the Zero Emission Transportation Association, known as ZETA, included a wide-range of businesses, from EV makers  such as Tesla, to the makers of charging stations, to electric utilities, including Duke Energy.

“Transportation is responsible for more carbon emissions than any other sector of the U.S. economy. By embracing EVs, federal policymakers can help drive innovation, create hundreds of thousands of new jobs, and improve air quality and public health,” said Joe Britton, Executive Director of ZETA, in a statement on the group’s website.

Biden’s goal of building 500,000 stations would be major increase in the current EV infrastructure. According to a database from the Department of Energy, there are more than 95,000 charging outlets at 28,577 stations across the U.S. To support the 18.7 million projected EVs on U.S. highways by 2030, the Edison Electric Institute, which represents U.S.-based investor owned utilities, said the U.S. would need to build about 9.6 million charging ports. Each charging station usually has more than one port.

In a December report, the Alliance for Automotive Innovation said that EV adoption was hampered by limited access to charging stations, which creates “range anxiety” among EV drivers. The report said that efforts to boost charging infrastructure would lead more in the U.S. to buy EVs.

Despite the global Covid-19 pandemic, there’s been growth in EV sales and adoption, especially in areas where regulations are pushing for adoption, speakers at the recent Reuters Events: Future of Renewables conference said.

“In Europe, where there are emission targets for vehicle fleets, we’ve seen increasing EV sales, leading to outstanding growth in the EV space,” said Jose Serras-Pereira, consulting director at international market research firm Frost & Sullivan. “However, the costs for electric vehicles are still a little high.”

As consumer interest in EVs mount, traditional vehicle makers are looking to quickly get into the market. While cost has been a deterrent for some, there are a lot of benefits and cost savings that come with owning an EV, officials at the conference said.

“We need to change the perception that electric vehicles are expensive,” said María Mendiluce, CEO of the We Mean Business Coalition. “There’s a lot at stake in the next five yeas for the industry.”

GM will spend $27 billion on EVs between 2020-2025, said Parker, with the goal to offer a wide range of products to the market. General Motors is planning to have 20 EVs across its brands by 2023.

“The investments we’re making are for products that are for everyone,” Parker said. “We’re going to make exciting products that can be charged with renewable energy on grids that are increasingly green.”

Another company with plans to boost its selection of EVs is Volvo, which recently introduced its first all-electric SUV, the XC40 Recharge. The company currently offers several makes of hybrid vehicles.

“Customers are demanding sustainable mobility,” said Martina Buchhauser, Volvo chief procurement officer “During the pandemic, global sales have gone down 9%, but EV sales have doubled in Europe. It’s nice to see that the demand is there.”

Many consumers who are buying EVs do so out of concern for reducing emissions and  thereby slowing climate change. To help make these purchases more valuable, customers want to know that their vehicles are being charged through electricity that’s generated by such renewable sources as wind and solar.

“Customers want to have the confidence that their zero-emission vehicle was charged with renewable energy,” Parker said. “We’re working in partnerships with other entities to help be more transparent, so that customers can be confident in the data that shows how their vehicles are charged.”

One key element to facilitate EV charging will be to create a set of standards that can help ensure that drivers can use charging facilities, wherever they find them. It will also be important to implement other infrastructure standards, Parker said, such as building codes for apartments, that can help make customers feel more confident in buying an EV.

“We need to have good standards that allow customer adoption of EVs without fears of impediments to their use,” Parker said.

Electric vehicles may even require new business models to meet the changing technology, Parker said, noting that the most technologically advanced part of an EV — its battery — may soon be advanced enough to outlive the automobile it’s in.

“Perhaps in a new model, the customer doesn’t own the battery,” he said.

EVs are proving to be an exciting new product for consumers, Parker said.

As an example, GM cited a focus group conducted with the Cadillac LYRIQ, an all-electric SUV that the automaker is introducing.

“It has some of our highest satisfaction rates,” he said. “Several of the people that went into it said they wouldn’t buy an electric vehicle, but left saying they would.”

(Edited by Matthew B Hall and Bryan Wilkes)