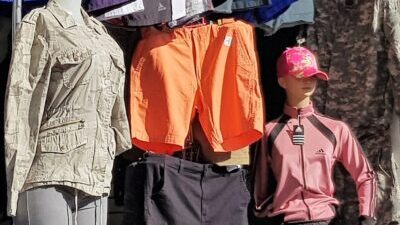 Street vendors buying, selling, and exchanging second-hand goods were common in Mexico City throughout the 1950s. Their cries announcing merchandise were like chants: “We buy mattresses, drums, refrigerators, stoves, washing machines, microwaves, or any metal scrap that you sell!” In Spanish, these mobile merchants were called “ropavejeros,” which means “one who sells old clothes.”

Ropavejeros have been around for hundreds of years, with evidence of street vendors selling and exchanging goods through the European roads in the Middle Ages. Their work evolved and eventually reached Mexico, where they became easy to identify through their famous cries.

In the mid-twentieth century, ropavejeros used to walk Mexico’s streets with a raffia sack and a basket full of items to trade. Later on, they used bikes or tricycles instead and announced their products with a megaphone. The business kept adapting to modern times, and ropavejeros incorporated vans or pickups into their trade, which allowed them to cover more blocks and carry heavier things. They also began using recorded cries to advertise their merchandise, but they kept the original chants’ spirit.

Despite ropavejeros’ efforts to keep up to date, technological advances have been killing this trade. People buy second-hand things online now, and all that ropavejeros can do is resist. They used to pass down their trade to the next generations. Some ropavejeros who have inherited the trade are adapting to the maelstrom of modern times.

“The ropavejero very seldom walks through the neighborhood, not to say that he no longer comes,” said Candelaria Ramírez Rojas, a 61-year-old Mexican housewife. “A van drives around buying appliances or the junk that clutters up homes. They do not buy clothes or anything else. If you want to sell clothes, books, or an appliance, you should go to the second-hand flea markets. You can only sell there, because they don’t swap things.”

What can a ropavejero buy or trade? Porcelain, glass, pewter, glassware, Teflon and ceramic pans, clothing, footwear, or scrap metal. Some people even give them jewelry, silver or gold, to help them survive. Ropavejeros used to pay for the exchange with gardening services, errands, or pottery, or in cash. They were able to make a living and support their families, but today the economy works differently, and they are vanishing from the streets.

Fewer tricycles or trucks are wandering the streets playing the ropavejeros’ cries. It is not possible to exchange things anymore, only buy. Ropavejeros have become trinket vendors, looking for appliances or scrap metal to sell in markets or specialized warehouses. They stand out for being able to profit from objects that almost everybody else would consider waste.

“There are like four second-hand flea markets still in place,” said Ramírez Rojas. “As I said, there you can only sell or buy. Nothing is traded anymore. In my childhood, it was common for the ropavejero to walk by, but everything changed. This trade is gone.”

New regulations are about to bury the ropavejero trade. Mexico City’s government made some reforms to its laws in 2017. The Solid Waste Law, in the Penal Code, forbids the collection of any waste without an official certification from the city government. Ropavejeros and trinket vendors are left without a means of survival, since their trade is part of the informal economy.

Although ropavejeros still operate in some states, there is a strong possibility that similar laws will spring up across the country in the next decade, ending the ropavejero tradition for good.

«Previous Post
‘Tis the Season for Fights Over Christmas Displays »Next Post
Christmas without Turkey!? These Vegan Dishes Make It Possible