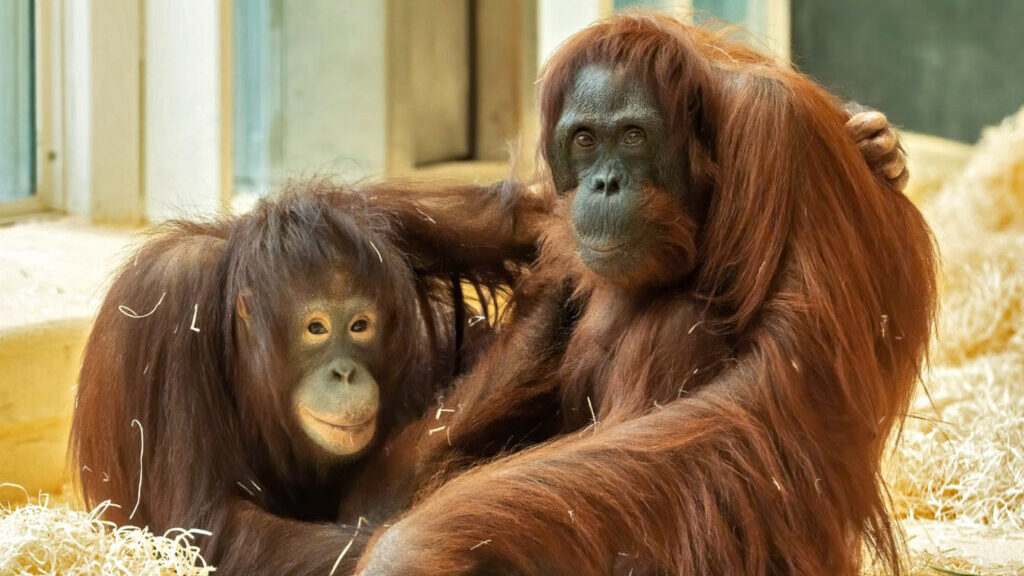 The potential love interest seems to have livened up the older male. Grasinger described it as “the second spring has begun in the middle of the winter.” (Daniel Zupanc/Real Press).

VIENNA — The delicate process of introducing two young female orangutans to liven up the old ape group in Vienna Zoo has been a big success.

The Orangutan, which means “man of the forest” in Malay language, tends to live a solitary existence in the wild.

When 7-year old Surya and 12-year old Sani from zoos in Germany and Ireland, respectively, arrived in Austria two months ago, the primary objective was to kick-start new dynamics.

The old male, Vladimir, and the female, Mota, both over 50, had grown slow and complacent. They needed fresh blood to liven things up. If all goes well, zookeeper Sascha Grasinger hopes reproduction will take place in the orangutan enclosure for the first time in more than 25 years.

“There seems to be promising chemistry between Sari and Vladimir. She often tries to be near him, and he seems very interested and throws her long glances,” Grasinger said.

The potential love interest seems to have livened up the older male. Grasinger described it as “the second spring has begun in the middle of the winter.”

“Sari likes to look for closeness to Vladimir and vice versa,” he said.

As for 56-year old Mota, she has found new energy and purpose in the middle of the zoo’s coronavirus lockdown. She doubles as a reserve mother to the youngest new member of the group.

When Surya first arrived in mid-October, and Sari two weeks later, they were first isolated to avoid a potential clash between them and the old clan. The socialization process began by introducing Mota to Surya and letting them get to know each other. The two instantly bonded and have been inseparable since.

“Mota, who’s actually a rather quirky character, immediately closed Surya in her heart. Mota and Surya are always together. They even hold each other’s fur while walking. The two are only available in a double pack,” Grasinger said.

Conversely, Sari is a highly curious and vibrant whirlwind, quite social and always on the move. It is exciting to see the relationships build and new dynamics unfold, he said.

Yet, it wasn’t a given the animals would click.

Orangutans are said to be the closest relatives to man, sharing 96.4% of our genes. Sometimes they work smoothly together, and sometimes they don’t.

“Orangutans can also attack each other quite badly. If that happens, there’s nothing much we can do to stop it. We can’t go into the enclosure and pull them apart. It would be extremely dangerous. We can try to lure them apart with food, or we can hose them down. If that doesn’t help the vet, as a last resort, can knock them out with a tranquilizer dart,” Grasinger said.

“That’s the reason they need the quarantine phase to get to know each other from a distance before slowly and gradually being introduced. In this case, however, they have exceeded expectations. They are doing really well, and from what we can see, our first objective has been reached,” he said.

It has been five weeks since Sari and Surya were first introduced to the group. They remain in the indoor enclosure, given the cold weather. They won’t be let out into the large enclosure until the temperature hits at least 60 degrees.