Show and Tel: Bizarre Sculptures on View in Tel Aviv 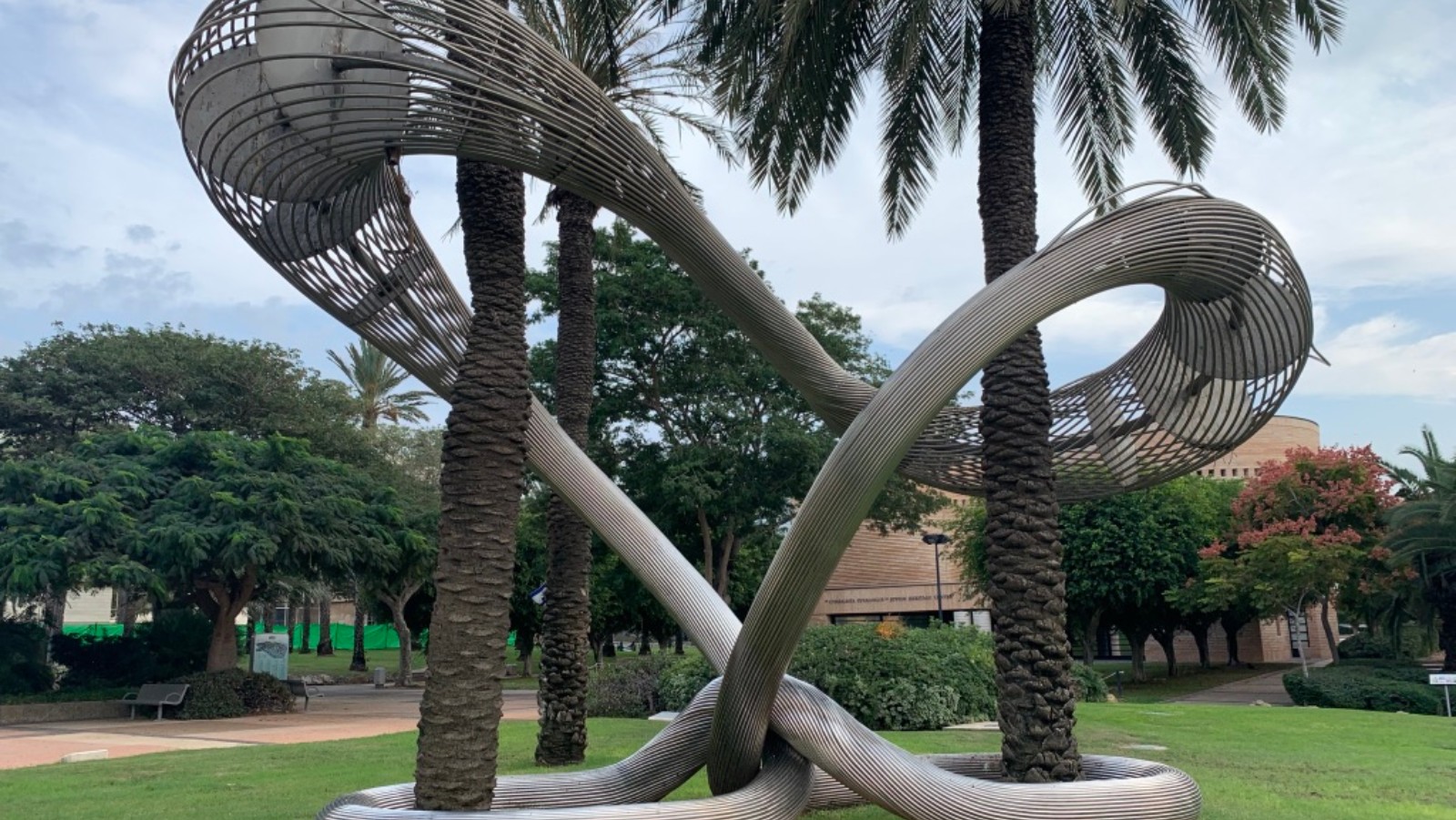 Tel Aviv is known for its legendary public art. While street art is the city’s main claim to fame, the sculptures that saturate the streets and green spaces of Tel Aviv are equally awe-inspiring.

Since people outside Israel can’t visit Tel Aviv right now, ISRAEL21c brings you pictures and history of some of the best sculptures around the city.

From Tel Aviv University in the north to Jaffa down south, these iconic sculptures can be found in all corners of this artistic city.

This eye-catching sculpture wrapped around the trees of Tel Aviv University’s campus was created by award-winning Israeli architect Ron Arad to honor the 4,000 Ethiopian Jews who died on their journey from Ethiopia to Israel.

Its title, Kesher, translates to “connection.” Arad used interwoven metals that snake around the square’s palm trees to signify unity and connection.

Spirit of Freedom by David Gerstein

This hand-painted sculpture stands tall in the center of Tel Aviv University’s campus. Built in 2009 by David Gerstein, the figure emotes bliss through its dynamic pose and bright hues.

While the shape of the human is constructed through simple lines and squiggles, the butterflies that fill its body are ornate and unique. The youthful energy of the statue reflects Gerstein’s history as a children’s book illustrator.

Artist Robert Berks also constructed hundreds of other bronze sculptures during his career. His use of layered pieces of bronze adds dimension and character to this sculpture.

At the entrance of Tel Aviv University, you’ll find this reference to the Trojan Horse in the ancient story of Troy. Cyber Horse is made of infected computer and phone parts to make a statement about the potential malicious effects of technology and malware.

The artist communicates that this horse, like the Trojan Horse, is the carrier of danger and bad news. The variety of computer screens, keyboards, and internal hardware create a complex structure that takes a stance on a modern social issue and is visually fascinating.

Troubles in the Square by Zadok Ben-David

This collection of steel cutouts on the plaza of the Tel Aviv Museum of Art illustrates the playful interactions between the birds and people that can often be found there.

Ben-David’s scene depicts individuals interacting with the birds around them while remaining isolated from other people nearby.

Israeli artist Yaacov Agam is famed for his abstract and colorful works (including the Fire & Water Fountain at Tel Aviv’s Dizengoff Square) that play with the viewer’s perspective.

This sleek steel menorah seems to be in motion as the viewer moves around it, shifting into new shapes and forms with every step. Agam stays connected to his Jewish roots (shorashim) by creating this sculpture turns a traditional Jewish object into art.

Ben-Gurion, the first prime minister of Israel, is an iconic figure in modern Israeli history. His influence on the country and its people is so monumental that many artists have captured it in their work.

The photographer Paul Goldman captured Ben Gurion doing a headstand on Frishman Beach in Tel Aviv in 1957. Residents of the area noted that it was not uncommon to see the prime minister doing such exercises on the beaches and yards near his home in the city.

The Tel Aviv Municipality put up this sculpture in 2015 on the same beach where the original photo was captured, and it has since been a magnet for tourist photos and postcards.

This jumbo-sized mosaic mosquito stands above a patch of green overlooking the Mediterranean Sea.

The massive insect’s body is made up of shards of broken china, mirror, and glass. Each small piece is unique in its shape and pattern but blends into the larger mosaic to form a beautiful synthesis of broken parts.

This sculpture stands out from the surrounding flat grounds in its scale and shape while simultaneously blending into the nature and wildlife that fill this green space. It is one of Ruslan Sergeev’s many mosaics that can be found around Tel Aviv and other Israeli cities.

Gate of Faith by Daniel Kafri

This sculpture was built between 1973 and 1975 by Daniel Kafri and stands atop Peak Park in Old Jaffa in southern Tel Aviv. The gate is made of Galilee stone and stands 13 feet tall and wide. The biblical figures of the three patriarchs Abraham, Isaac, and Jacob are depicted on the two vertical pillars.

These patriarchs were the recipients of the promise of the Land of Israel, which is depicted in the top pillar through Joshua’s capture of Jericho and beyond. The combination of these profound details forms the gate of entry to Israel.

This incredible piece of art in Jaffa not only appears to be defying gravity but also elegantly combines living and non-living aspects. Fed through a drip system, a tree grows and produces fruit out of a massive “seed” made of steel.e

Ran Morin constructed this sculpture to communicate his admiration for Israel, a nation born out of seemingly impossible circumstances—like a seed made of metal–and thrives against all odds.

The blossoming orange tree has hung in Jaffa since 1993 and serves as a metaphor for the growth and production of Israel, a young nation that continuously proves its resilience to all those who observe.

Drought Will Force Western US To Rethink Water Use, Experts Say

Not So Quackers: Goose Flying Upside Down Is Simply Showing Off, Say Experts