Protestors and court cases set project back by two years 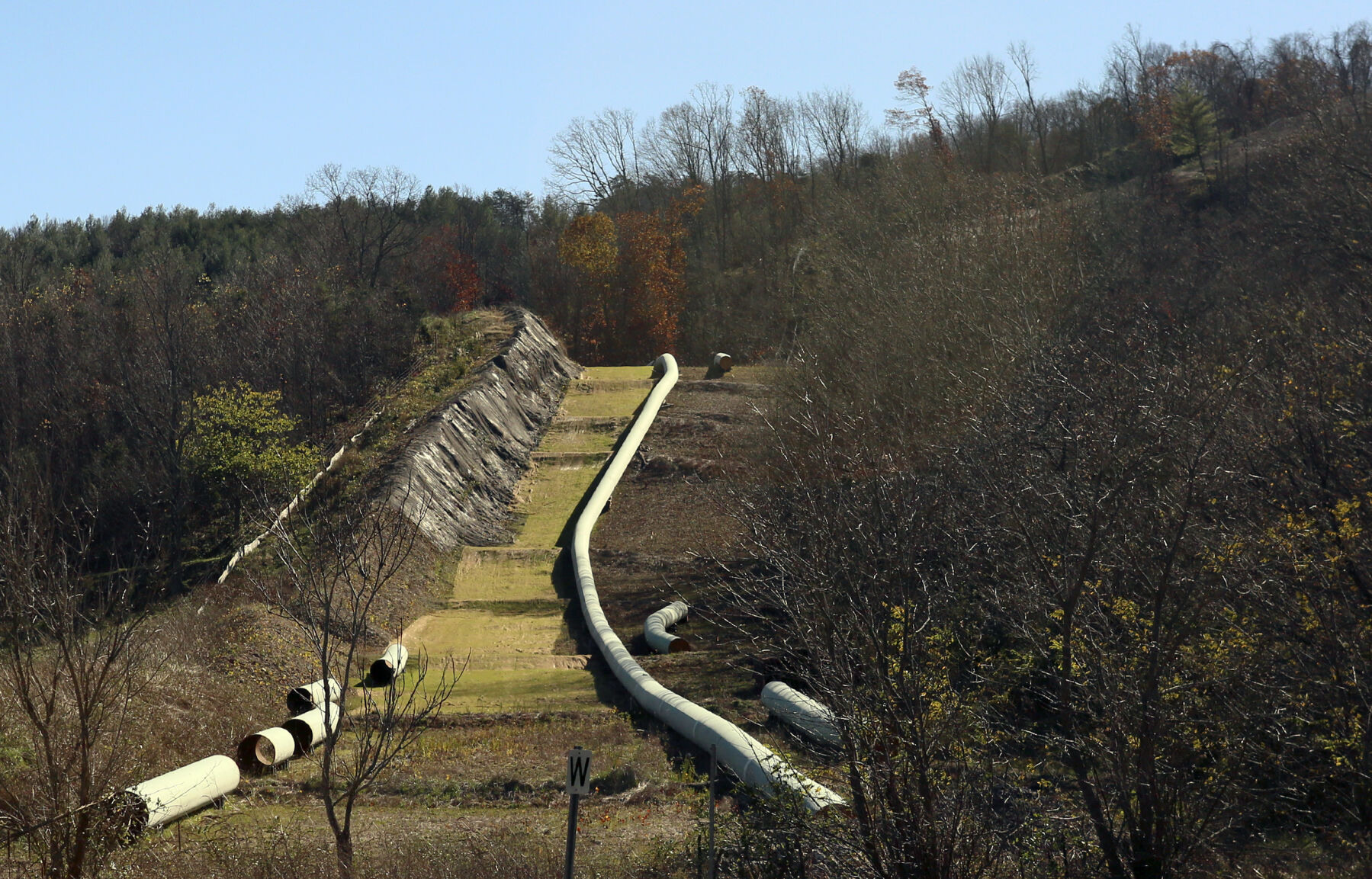 The Mountain Valley Pipeline is above ground and visible from U.S. 460 in Elliston, Nov. 16, 2020. (Photo courtesy Matt Gentry, The Roanoke Times)

As construction of an underground natural gas pipeline weaving its way through the mountains of Virginia draws close to completion, protests to the project are intensifying.

A group of environmentalists who have camped in trees along the pipeline’s path for two years remained in place this month despite being given a court order to move.

Meanwhile, other opponents celebrated their success in one of two court challenges seeking a halt to sections of the multi-billion dollar project.

The Mountain Valley Pipeline (MVP) is designed to carry natural gas for 303 miles from the northwest of West Virginia to the south of Virginia.

The underground system is being built and will be owned by a consortium of natural gas interests called Mountain Valley Pipeline LLC, with EQM Midstream Partners serving as primary interest owner and operator.

Construction of the project is 92 percent complete “despite the unprecedented regulatory and development challenges,” the company said in a press release earlier this year, and is expected to be up and running in early 2021.

This includes three compressor stations, three of four certificated interconnects, 80 percent of the pipeline or 264 miles of pipe welded and in place, and about half of the right-of-way restoration.

Since 2018, a group of protestors in the area of Roanoke, Va. have sought to stall the project by camping in trees along the pipeline’s route.

The “tree-sitters” have been there for over two years, Alan Stuart Graf, president of the Southwest Virginia chapter of the National Lawyers Guild, told Zenger News.

After failing to get an order in federal court to have them removed, Mountain Valley petitioned the Montgomery County Circuit Court, which ruled on Nov. 12 that the protestors had to come down from the trees by Nov. 16.

Though the property on Yellow Finch Lane is privately held, Graf said, the pipeline was granted access through eminent domain — the power of the government to take private property and convert it into public use.

While the identities of the protestors are so-far unknown, the guild is prepared to defend them in the event that they are arrested, the chapter president added.

He said their efforts to stop the pipeline were motivated by their concerns over the contribution fossil fuels are making to climate change.

“These young adults are the leading edge heroes of our time,” Graf said. “They understand the dire emergency that climate change is creating for our planet.”

Representatives from the National Lawyers Guild have been on the scene to observe how the protestors are removed from the trees, but as of press time, the protestors had not moved.

It will be up to the local sheriff to try to get the tree-sitters down, which could be dangerous, Graf said. “We are there to let them know that the eyes of the world are upon them.”

He added that the tree-sitters’ protest could ultimately be effective, as adding costs and delays to the project could make it too unprofitable for the builders.

“We have to make the effort. The climate change clock is ticking louder and louder.”

The U.S. Fourth Circuit Court of Appeals temporarily suspended further construction of the Mountain Valley Pipeline over streams and wetland in southern West Virginia and Virginia on Nov. 9.

The decision came after eight conservation groups challenged permits issued to the project in September by the Army Corps of Engineers.

Peter Anderson, Virginia program manager at Appalachian Voices spoke of his relief at the decision in a Nov. 9 press release.

“Communities along the pipeline route have been on edge these past several weeks as the company has moved in heavy equipment and started doing work,” he said, adding that he is glad the court has “pressed pause”.

The stay will remain in effect until the court rules on the groups’ petition to overturn Mountain Valley’s water permits for the project.

“This decision will help ensure the pipeline doesn’t keep posing catastrophic threats to waterways that people and imperiled species depend on to survive,” said Jared Margolis, senior attorney at the Center for Biological Diversity.

“Despite the project’s clear failure to comply with the law, Mountain Valley keeps pushing this climate-killing menace. We’ll continue working to ensure this destructive pipeline doesn’t poison waters and threaten communities along its route.”

A second court case against Mountain Valley seeking a general stay was not so successful and on Nov. 18 the same federal appeals court allowed the construction of the project to continue.

The court rejected an appeal from environmental groups over the U.S. Fish and Wildlife Service permits which allow construction in endangered and threatened species’ habitats.

“The importance of the MVP to West Virginia in terms of infrastructure investment, jobs, tax revenues generated at local, county and state level cannot be overstated,” said Charlie Burd, executive director of the Independent Oil and Gas Association of West Virginia, in a Nov. 23 press release.

Over the course of its construction, the Mountain Valley Pipeline has been vigorously opposed by countless environmental groups.

“This dirty, dangerous fracked gas project is years behind schedule, billions of dollars over budget, and was sued by the Commonwealth of Virginia for violating common sense environmental protections hundreds of times,” said Sierra Club Beyond Dirty Fuels Senior Campaign Representative Joan Walker in a Sepember press release.

Appalachian Voices on its website says the 125-foot wide path of the pipeline would impact farms, national forests and historic sites including the Appalachian Trail, while also contaminating streams and drinking water.

However, Mountain Valley Pipeline, LLC, said in August that it would make a $19.5 million grant to the Appalachian Trail Conservancy to help protect the Appalachian National Scenic Trail, as well as “support outdoor recreation-based economies” along the trail area.

“We understand the sensitivities that surround the blending of large-scale infrastructure projects with environmental protection, and we recognize the importance of continuing to develop major energy projects in a responsible manner,” said Charletta.

Environmentalists claimed credit for derailing a similar project on July 5, when Duke Energy and Dominion Energy announced that it would cancel its proposed Atlantic Coast Pipeline.

“Duke and Dominion did not decide to cancel the Atlantic Coast Pipeline — the people and frontline organizations that led this fight for years forced them into walking away,” said Sierra Club executive director Michael Brune.