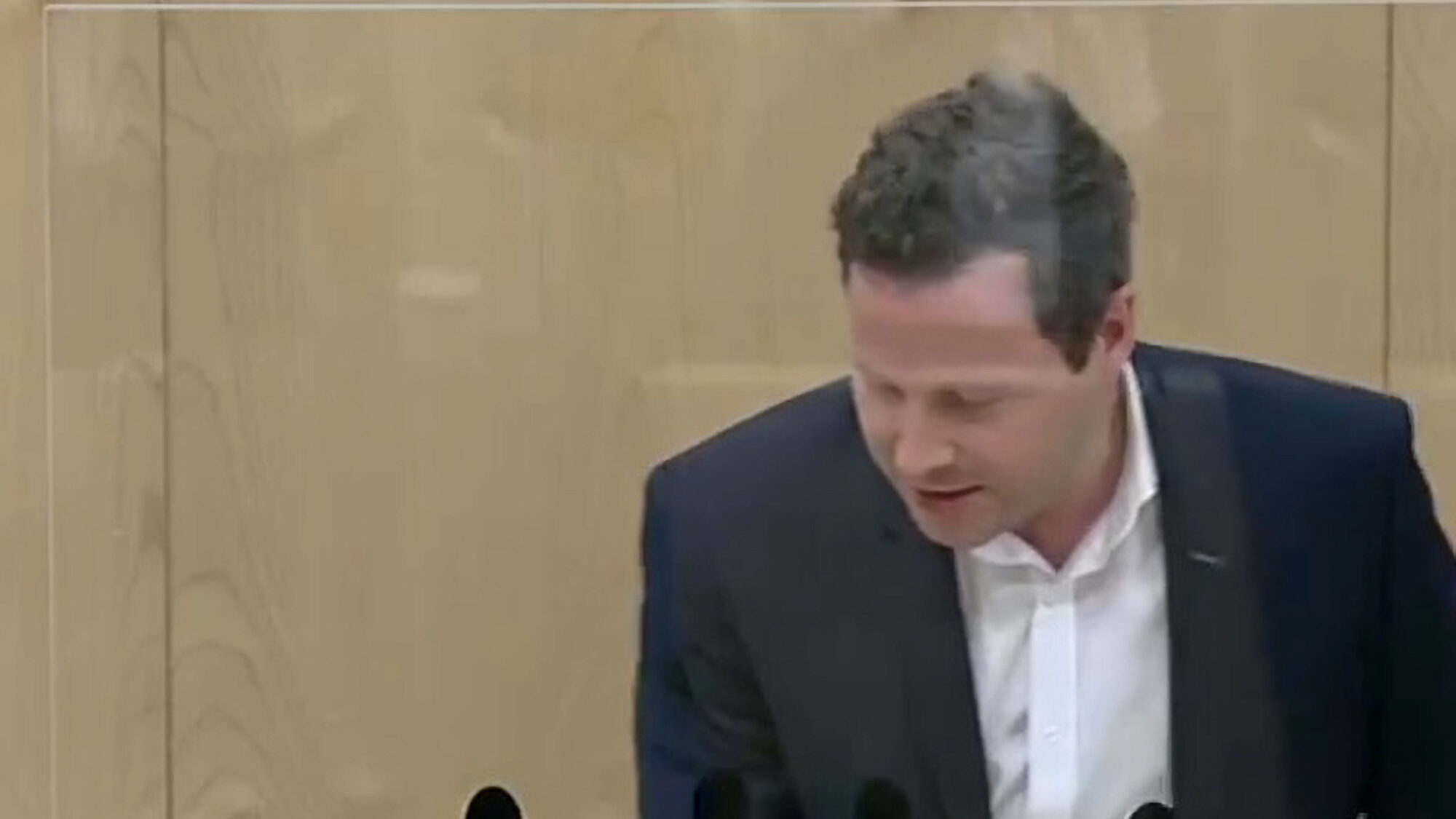 Schnedlitz was filmed putting a swab into a glass filled with Coca-Cola. He then pasted it onto the test and got a positive result, telling the assembled house: “Mr President, we now have a problem because we have a positive corona test here in parliament.” (FPO/Michael Schnedlitz/Real Press)

An Austrian parliamentarian caused an uproar after performing a COVID-19 test on Coca-Cola during a Dec. 14 speech.

The test, conducted in the Austrian Parliament, appeared to come out positive. Michael Schnedlitz, a member of the Freedom Party (FPÖ), claimed that was evidence the government’s mass-testing wastes taxpayer money. Schnedlitz’s party has been critical of the country’s coronavirus restrictions and testing regime.

“Before making such embarrassing statements, it might have been a good idea for the honored member of parliament to occupy himself a little with chemistry,” Vanessa Koch, DIALAB product management officer, said in a written statement.

Schnedlitz skipped one key step in the test procedure — which renders the test useless, according to DIALAB.

“It would be possible to get a positive result with any test. You might as well try it with a pregnancy test, because this test had nothing to do with a COVID-19 test either,” Koch said.

Schnedlitz was filmed putting a swab into a glass filled with Coca-Cola. He then pasted it onto the test and got a positive result, telling the assembled house: “Mr. President, we now have a problem because we have a positive corona[virus] test here in Parliament.”

The video was widely shared on Facebook, notching up 2.5 million views. But the social media platform flagged Schnedlitz’s post as COVID-19 misinformation.

DIALAB responded the next day with its own video, showing that if the test is carried out properly, the result is negative.

In the DIALAB video, Christoph Pedain, head of the patient-centered diagnostics division at industry giant Siemens Healthineers, explained the false positive: Coca-Cola has a low pH value, it is acidic, which destroys the test’s antibody proteins.

“The decomposition creates many binding sites for the color particles in the test, and the stripes become visible,” he said.

The COVID-19 test works in a fashion similar to a pregnancy test. A single line is negative, and two lines indicate a positive result. Because Coca-Cola contains a great deal of acid, the test will be useless if the acid isn’t stabilized before applying the fluid to the test.

Pedain said Schnedlitz left out a crucial step in the procedure, namely the application of a buffer solution that will stabilize the pH of the sample. The politician simply put the beverage directly onto the strip, rendering the test useless.

Rapid coronavirus tests, which are much faster than the more common PCR tests, are a relatively new addition in the fight against the pandemic. But they are often targets of conspiracy theorists who claim they do not work. The Canadian Journal of Political Science noted denials and misinformation about the coronavirus have exacerbated its spread and slowed pandemic responses, particularly in the U.S.

The Freedom Party did not comment directly on Schnedlitz’s test in Parliament.

“Every democrat should be aware that consensus, conflict, criticism and controversy are all essential elements of the parliamentary discourse. The speech provided a significant contribution to the discussion about mass-testing,” FPÖ Parliament group spokesman Hubert Erhart said in a written statement, speaking for his party.

“We are against mass-testing for one simple reason: The tests only provide a here and now snapshot and do not provide a true picture, since infections incurred the same day, or even in the line while waiting to get tested, can’t be ruled out by the tests,” the statement read.

While Austria fared comparatively well in the spring, a second wave of Covid-19 this fall and winter has seen the nation’s cases spike. That has caused the country’s ruling government coalition to introduce a new lockdown and a broad-sweeping test program to overcome the crisis.

The Austrian Freedom Party has opposed these measures. It has objected to a proposed mandatory vaccine and believes mask wearing and mass-testing won’t help.

As of Dec. 17, Austria’s government’s official COVID-19 dashboard had registered a total of 330,457 coronavirus cases and 4,886 corona-related deaths in a population of 8.9 million.