Pandemic Pot: How Marijuana Went Mainstream in the Year of Covid-19 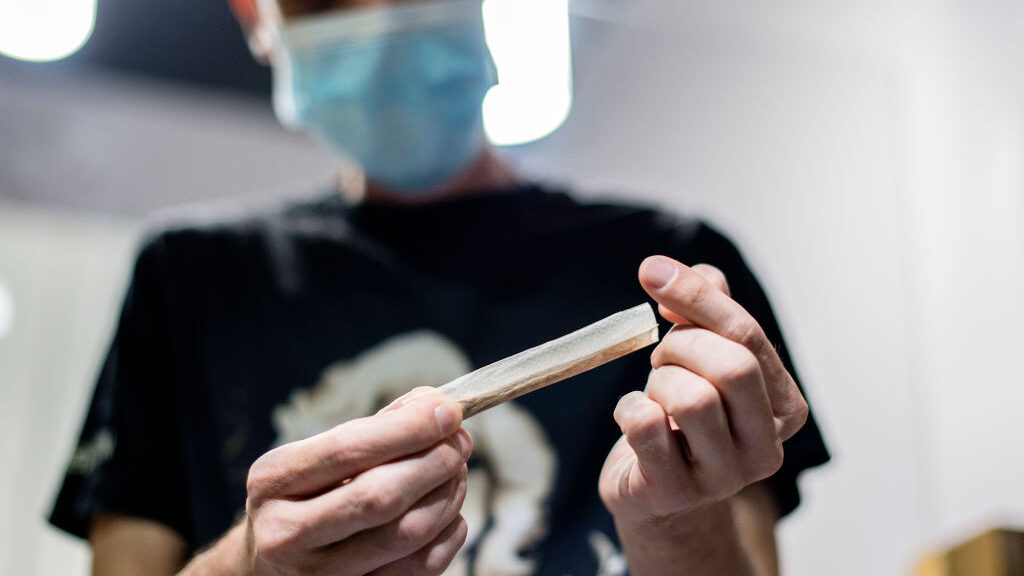 “Marijuana legalization, both medically and recreationally, is driven by economics and individual freedoms, rather than public-health consequences,” Dr. Roneet Lev wrote. (Photo by Alberto Ortega/Getty Images)

DENVER — As the third wave of the coronavirus pandemic descended on Colorado in November, gatherings were limited and restaurants closed to sustain social distance.

Recently at The Green Solution, a brightly lit dispensary in Denver, there wasn’t a sense of urgency. Nor were there any crowds.

That’s a far cry from March, when the city issued a stay-at-home order that would have required recreational dispensaries to close. Later that day, after users scrambled to pot shops to stock up, the city exempted dispensaries from the order.

“I had a line around the building,” recalled 23-year-old Alexander Thigpen, who has worked at the dispensary for about a year and a half. “I sold out of everything.”

In declaring dispensaries essential businesses, Denver, along with other U.S. legal-pot jurisdictions, entered a seminal moment in the evolution of national acceptance. Marijuana, often viewed as a substance used at the margins of American society, had gone mainstream.

“Being declared essential was a shot in the arm for the industry,” said Alan Brochstein, founder of 420 Investor, a due-diligence platform focused on publicly traded cannabis companies.

“Marijuana legalization, both medically and recreationally, is driven by economics and individual freedoms, rather than public-health consequences,” Dr. Roneet Lev, director of operations of the Scripps Mercy Emergency Department, San Diego campus, wrote earlier this month in The San Diego Union Tribune. ”Public-health consideration would account for the total associated increase in drug use and emergency visits, and the various medical complications. I do not wish to judge or shame people who choose to use marijuana, but I strongly believe the public has the right to informed decisions.

“People who smoke cigarettes understand the risks of addiction, cancer, emphysema and heart disease. People who use marijuana are sold on the multiple benefits without education on drug interactions with prescription medications, high potency psychosis and suicide, testicular cancer, and pulmonary or heart risk.”

Demand for Cannabis Rises During Pandemic

Despite such reservations, elections in November showed broad support among traditionally conservative states, such as Montana, South Dakota and Arizona, in legalizing recreational marijuana use. South Dakota also approved medical use, as did Mississippi.

A recent Gallup poll showed 68% of Americans support federal legalization, the highest reading since the organization began measuring the public’s view on the issue in 1969. Earlier this month, the House of Representatives passed the Marijuana Opportunity Reinvestment and Expungement (MORE) Act, which would federally decriminalize marijuana.

While the tide was already turning, the Covid-19 pandemic helped accelerate state-level legalization, Brochstein said. Decriminalizing recreational marijuana provides a new source of tax revenue and jobs and means  they don’t have to spend money on enforcing anti-marijuana laws.

Columbia Care, a cannabis provider that owns The Green Solution dispensaries, launched virtual care, which allows customers to connect with a salesperson via video over the internet. While that service grew out of the pandemic, it’s a feature that Columbia Care plans to keep, said Adam Goers, vice president of corporate affairs with the New York-headquartered company.

The declarations that dispensaries are essential businesses may have also helped demand by classifying them with socially acceptable alcohol stores, Brochstein said.

The ability to stay open during lockdowns also helped give confidence to marijuana-industry investors, Brochstein said. In March, as the stock market was tanking, cannabis companies were struggling to access capital. If dispensaries had been forced to shut town, many companies would have been wiped out, he said.

Instead, the industry is booming.

“It’s recession-proof and Covid-proof. Many of these businesses are now labeled essential, and sales in 2020 are higher than ever,” Andrew Hunzicker, owner of DOPE CFO, which provides accounting and tax training to the cannabis industry, said in an email.

In California, America’s biggest legal weed market, cannabis tax revenues have set records each quarter this year, continuing a trend established before the pandemic, according to the California Department of Tax and Fee Administration. Cannabis tax revenue hit $306 million in the third quarter, bringing the total for the first nine months of the year to more than $778 million.

Average overall cannabis use has increased for 42% of cannabis consumers during the pandemic, according to a U.S. market survey from New Frontier Data, a global cannabis industry analytics company. Many Americans reported using cannabis specifically to improve mental health.

“Among the most common reasons consumers gave for using cannabis include promoting relaxation, reducing anxiety, and aiding sleep; for many, the pandemic has subsequently heightened those needs,” according to New Frontier.

More free time and a desire for regulated cannabis products people view as safer than those they could get from the illicit market have also helped fuel demand during the pandemic, Brochstein said.

While there may be more demand for pot from the stressed out or unemployed during the pandemic, Karnes said some sales are headed for the so-called gray market. That’s where people buy weed legally then sell in a state where it’s not legal.

Coming Year Could be Big for Cannabis in the U.S.

Despite the increasing acceptance of legalized recreational marijuana in the United States, there is still resistance.

A Gallup poll showed holdouts among conservatives, Republicans and weekly churchgoers. And the Senate is unlikely to take up a vote on the MORE Act this year to decriminalize marijuana, making the House’s passage largely symbolic.

Full federal legalization is possible in 2021, but more incremental progress is more likely, Goers said. That could come in the form of the Secure and Fair Enforcement Banking Act, which would create legal protections for banks that provide financial services to legitimate cannabis-related businesses. That’s especially important for small companies, Goers said, because it allows them access to more affordable capital.

William Bogot, co-chair of the cannabis law practice at Fox Rothschild, doesn’t think marijuana will remain federally illegal in its current state under the Biden administration.

“With many states facing budget holes in 2021 from the pandemic, I anticipate many more states will legalize and tax marijuana in 2021 for economic development,” Bogot said. “Some states might do so begrudgingly, as part of a new ‘arms race,’ just so their residents do not drive to a neighboring state that has legalized marijuana sales.”

Coming up with a federal marijuana program could take time, Brochstein said, pointing to the years it took Canada to allow recreational marijuana use — even after it had been approved for medical use.

“We’re moving in the right direction, but I don’t think anybody should expect it to happen in short order,” Brochstein said.