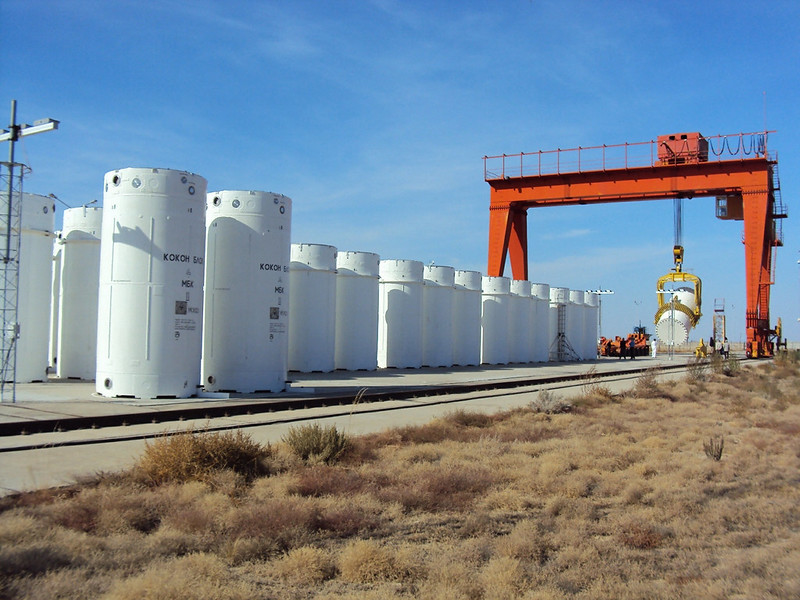 Massive containers hold spent nuclear fuel at safe and secure dry storage facilities. This photo shows, at right, dry cask recently loaded with spent fuel being lifted from a horizontal transporter to be placed vertically on a specially-designed storage pad. (Courtesy of Sandia National Laboratories)
With a new presidential administration set to take the helm, the U.S.’s top nuclear energy lobbying group sees an opportunity to finally achieve a permanent solution for disposing of the nation’s spent nuclear fuel.

“With the new administration’s focus on climate change and carbon-free energy, we are cautiously optimistic that it will lead to doing something constructive about used nuclear fuel and finally breaking that gridlock,” Rod McCullum, senior director of fuel and decommissioning at the Nuclear Energy Institute (NEI), told Zenger News.

While much of the focus on climate change solutions have been on renewable energy like wind and solar power, NEI argues that the nation’s nuclear power plants produce 55% of the country’s low-carbon energy, as 20% of the nation’s electricity is generated from 94 plants in 28 states.

One of the longstanding issues with nuclear development is how to properly dispose of spent nuclear fuel, which can be dangerously radioactive for more than 10,000 years after its use.

Spent nuclear fuel is currently stored on-site at the nuclear reactors where it was generated, but industry officials want the U.S. government to fulfill its commitment to create a permanent solution for waste disposal. However, intense local opposition to nuclear fuel disposal projects have slowed progress for decades.

For a few years after its use, spent nuclear fuel is stored in cooling pools at nuclear reactors. After it has sufficiently cooled, the waste is stored on the site of nuclear plants in concrete and steel containers called “dry casks.” The Union of Concerned Scientists has said that fuel stored in these casks is much safer than waste stored in pools.

Despite being in continual operation since the 1950s, the volume of waste generated by U.S. nuclear power plants since then is relatively small. The amount of high-level nuclear waste in the U.S. would cover a football field, at a depth less than 10 yards (9.14 meters), according to the U.S. Department of Energy (DOE).

According to NEI, used nuclear fuel is at 121 sites in 39 states. A permanent storage nuclear storage facility was proposed by Congress at Yucca Mountain in Nevada in 1987. While Nye County, Nev., where the facility would be located, has supported accepting the $100 million project, the state legislature and opposition from the state’s U.S. senators has stalled its development for more than three decades.

“We’re confident it is safe,” said McCullum, adding that Yucca Mountain is the “most studied piece of real estate on the planet.”

Local opposition to the Texas proposal goes beyond the governor.

“The government loses more money on nuclear waste lawsuits than on any other type of lawsuit,” McCullum noted.

In 2012, the Obama administration established the Blue Ribbon Commission on America’s Nuclear Future, which recommended several potential solutions to address nuclear waste, including creating an agency dedicated to finding permanent waste storage solutions. However, Congress has yet to address any of those recommendations.

Now, government officials are considering two new sites for storage of spent nuclear fuel. One is planned for a site 26-miles southeast of Carlsbad, N.M., and another in West Texas. Both could receive final approval in 2021, McCullum said, and be up-and-running by 2024. However, these sites aren’t for permanent disposal of waste, he said, only temporary storage for a few decades. The firm behind the West Texas site is seeking a 40-year permit to store as much as 40,000 metric tons of waste generated at nuclear plants  around the country.

Earlier this month, Texas Gov. Greg Abbott urged the Nuclear Regulatory Commission to reject a proposal to build a nuclear storage facility in Adams County in his state.  Among the chief concerns Abbott cited in his Nov. 3 letter is that the waste facility would be located in the Permian Basin Region, which has become the largest producing oil field in the world.

In a letter to the agency, Abbott wrote that the “facility imperils America’s energy security because it would be a prime target for attacks by terrorists, saboteurs, and other enemies. This location could not be worse for storing ultra-hazardous radioactive waste.”

Local opposition to the Texas proposal goes beyond the governor.

A group of 60 environmental groups, including the Lone Star Chapter of the Sierra Club, urged the NRC to postpone the process until the Covid-19 pandemic subsides, arguing that concerns over nuclear waste disposal require the highest level of public participation, including public meetings. In its letter to the NRC, the groups raised several concerns over the proposed facility that should be thoroughly vetted by the public.

Protect the Basin, another local group formed to oppose the project, raised concerns about how the waste would be transported to the site, specifically, the proposal to use trains and barges to move the waste.

In May, the project took a step forward when the NRC issued its “draft environmental impact statement,” which determined that the nuclear waste repository would have no discernable effects on natural resources or the environment.

There is also significant local support for the project. In 2015, the Andrews County Commissioners Court — the county’s local government — issued a proclamation supporting the project. The proclamation cited a proposed $3 million in annual fees paid to the county through the waste repository, while also praising the operators of the local facility for what it said was an experienced staff and a commitment to environmental protection.

The NRC has said it will issue its final environmental review of the West Texas site by July 2021. McCullum said that if the site receives government approval on the current schedule, it could be operational by 2024.

«Previous Post
U.S. Looks to Iceland as it Seeks to Boost Geothermal Energy Growth»Next Post
At 104, University of Manchester Student Finishes PhD Because Lockdown Kept Him at Home