Adam Armstrong spent $15,000 of his own money buying the gifts from a local Walmart 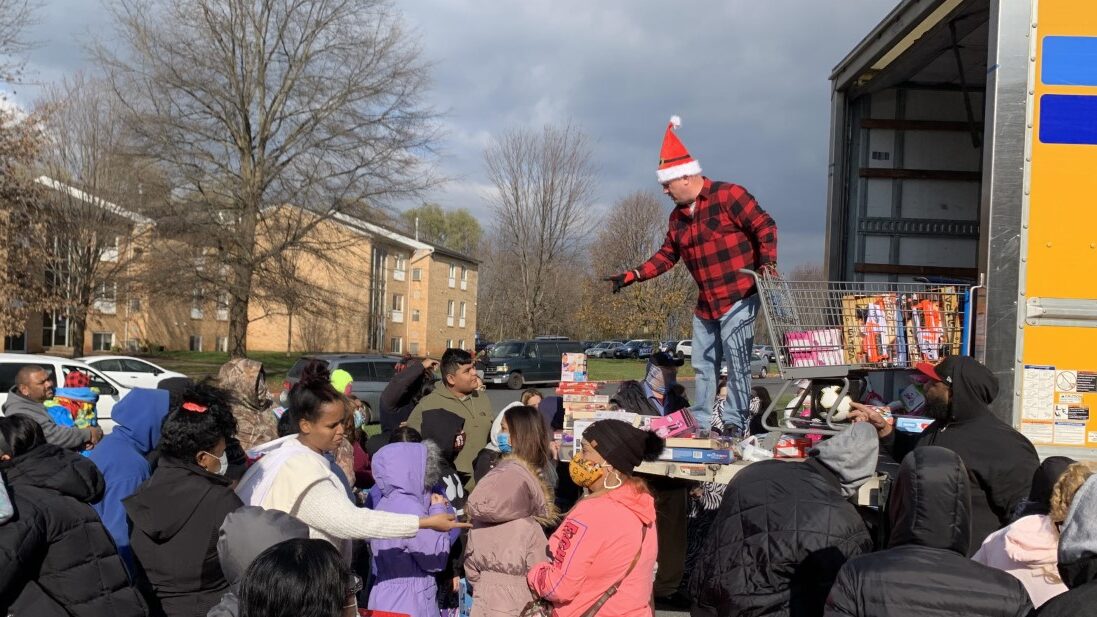 Armstrong told Zenger News that he chooses to give to the lower-income communities because "That is typically where the greatest need is." and went on to say, "I don't want kids to struggle regardless of their parent's situations." (Theo Whitelow Media Services)

HARRISONBURG, Virginia – Adam Armstrong, dubbed “Santa Armstrong” by many in Harrisonburg, Virginia, pulled into the Harris Gardens Apartment Complex in a 26-foot Penske box truck loaded with $15,000 worth of bikes, toy scooters, stuffed animals and board games.

Providing Christmas joy and, more importantly, service to the community is something that Armstrong has taken to heart during this holiday season.

More than 100 parents and children lined up on a cold Saturday afternoon to receive toys from Armstrong. Harris Gardens was the first of seven low-income neighborhoods that Armstrong would deliver toys to families in need.

Armstrong arrived wearing a Christmas hat and a flannel shirt. He was accompanied by his girlfriend, Heather Morris, childhood friends Anthony Vaughn and Bobby McCauley, as well his pastor Mark Leatherman and Leatherman’s son, Eli. Armstrong and his team immediately got to work, handing out the gifts to the children and their parents.

Armstrong, a real estate investor, actually lived in the Harris Gardens Apartment complex more than 10 years ago and knows what families in this community go through and how many struggle financially.

In an interview, Armstrong told Zenger News that he chooses to give to the lower-income communities because “That is typically where the greatest need is,” and went on to say, “I don’t want kids to struggle regardless of their parents’ situations.”

After spending 45 minutes handing out toys in Harris Gardens, Armstrong headed over to Lincoln Circle, a housing complex run by the Harrisonburg Redevelopment & Housing Authority. At this stop, Armstrong and his team handed out more gifts to kids, and their parents lined up to receive more assistance from “Santa Armstrong.”

Armstrong gave away every single item that he had on the truck. We interviewed Armstrong after the giveaway, and he had a big smile on his face.

“It was exhausting but very fulfilling,” Armstrong said after making his deliveries. He said seeing the kids reaching up and asking for this toy or that bike and watching them smile as he handed them the gifts “means the world to me.”

Monica Robinson, who is currently the Executive Director of the Valley Black Heritage Project, was on hand to witness the giveaway at Lincoln Circle.

That area, in particular, is in Harrisonburg’s historically Black Northeast Neighborhood.

“I was thoroughly impressed and thankful for the toy giveaway held by Adam Armstrong in the at-risk communities of Harrisonburg,” said Robinson, who previously served as the President of the Harrisonburg-Rockingham Chapter of the NAACP. “During this pandemic, lives have been changed by the many negative events occurring on a daily basis. People have lost hope, joy and faith that we will return to normal.”

Robinson’s grandson, Lliam Robinson, 11, was at the Lincoln Circle stop of the giveaway.

“I’m happy that Adam came to our neighborhood,” Lliam Robinson said. “I wanted a new bike, and he gave me one. He was wearing a cool Santa hat, and they called him Santa Adam.”

Children were squealing with joy, parents were smiling, neighbors were interacting with one another all while maintaining social distance. Thank you to Adam and all the helpers for making my neighborhood smile again.”

Armstrong says he has been doing different giveaways in the community during the holiday season for the past eight years.

Last year, he loaded up another truck with $12,000 of toys daily and delivered them to five low-income neighborhoods in Harrisonburg. This year he raised that amount from his own pockets by $3,000 and visited seven communities instead of the previous five.

I asked Armstrong if he will be doing the giveaway again next year, and he shook his head, yes, and with a grin spanning from cheek to cheek, said, “I definitely will.”

He added that he wanted to thank God, Pastor Leatherman and his son Eli, his best friends Anthony and Bobby, his girlfriend Heather and the staff at Walmart on Burgess Road for helping him load the box truck full of the toys.

In a world where so many are struggling, it is always refreshing to report on a hero amongst us.