U.S. Looks to Iceland as it Seeks to Boost Geothermal Energy Growth 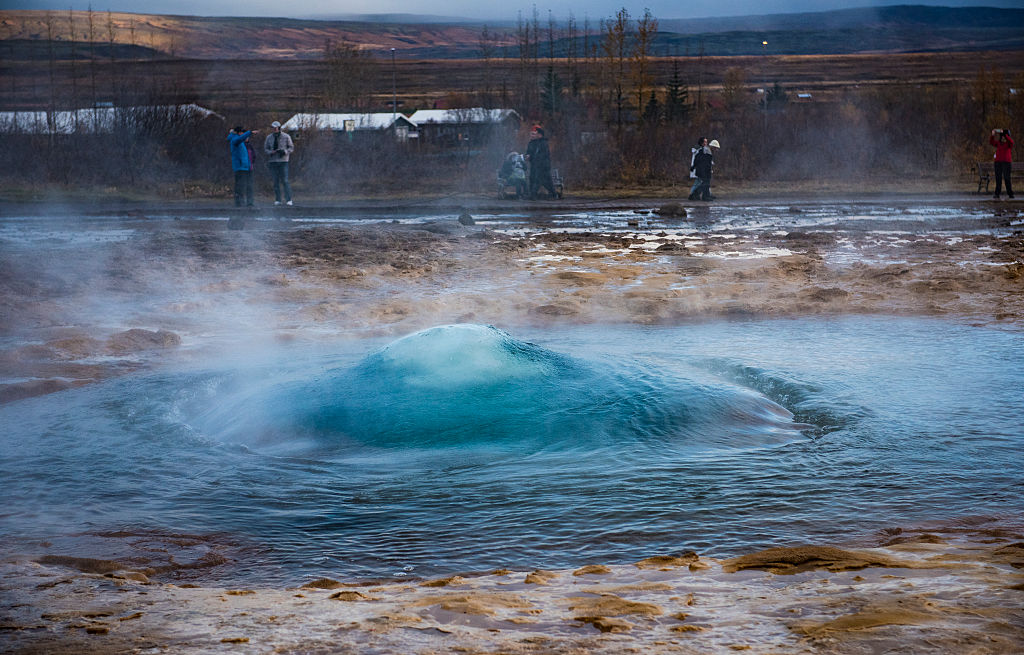 Strokkur Geyser is seen near to Selfoss, Iceland. (Photo by Alexander Scheuber/Getty Images).

Just beneath the surface of the Earth lies a tremendous untapped source of energy that could help the United States meet renewable energy targets and mitigate the effects of climate change.

Geothermal energy — derived from the planet’s internal heat — has to date been harnessed mainly in the west of the U.S. where molten rock is easy to access.

But now researchers are looking for ways to develop new technology to increase its use across the rest of the country and have met with experts from Iceland, which has heavily incorporated it into its energy economy.

At an online roundtable hosted by the Atlantic Council on Dec. 1, officials from both the United States and Iceland discussed the potential for geothermal energy in the U.S.

Formed from volcanic activity, the island of Iceland has 30 active volcanic systems, part of a geography that has allowed the nation of about 350,000 to make geothermal energy a big part of its energy economy.

The country derives about 65 percent of its energy from geothermal sources, which accounts for both electricity production and heating needs, according to government documents.

Now, the U.S. is looking to follow Iceland’s example and boost its own production of geothermal energy.

In a 2019 report, the Department of Energy concluded that as much as eight percent of U.S. energy needs could be met by geothermal energy.

It revealed that technological development in the energy sector could boost geothermal production to 60 gigawatts of electricity generating capacity. And improvements in technology could unlock even more, a top official at the department said.

“That’s a massive increase from today,” said Daniel Simmons, assistant secretary for the Department of Energy’s Office of Energy Efficiency and Renewable Energy. “We have so much opportunity to learn from the Icelandic experience.”

“Iceland would like to be a part of the geothermal development in the U.S.,” Gylfadóttir said. “Our doors are open, and we are looking forward to increased cooperation.”

Alexander Richter, managing director of the Iceland Renewable Energy Cluster and Iceland Geothermal, said he has seen a “reawakening” of development of geothermal energy in the U.S.”.

Geothermal energy can be harnessed for two distinct energy uses.

For electricity, geothermal plants can operate in much the same way that coal, gas and nuclear plants work — where steam is used to turn turbines and generate electricity.

However, instead of burning fuel, geothermal plants rely on molten heat just below the Earth’s surface to capture the steam.

Geothermal energy can also be used to channel heat for home and industrial heating, eliminating the need for using electricity for heating.

“It has incredible potential for electricity, but for space heating and industrial uses as well,” said Katherine Young, laboratory program manager of I-Geoscience at the U.S. National Renewable Energy Laboratory.

She added that permitting issues have slowed geothermal development in the U.S.

For this reason, much of America’s existing geothermal infrastructure is in the West, especially in California, Nevada and Utah.

But researchers believe that the potential for greater expansion of geothermal energy is possible with advancements in technology.

The world’s largest geothermal energy field is in California at a site in Sonoma and Lake counties called the Geysers, which accounts for 20 percent of the state’s renewable energy.

The 1.5 gigawatt plant is one of several located in California, which also includes the Salton Sea plant that generates 440 megawatts of electricity.

However, despite being a source of renewable energy, some environmental groups, including the Sierra Club, have urged caution on geothermal energy development.

The Union of Concerned Scientists also noted geothermal plants can have an impact on local water quality, and may need to significantly rely on local sources of water.

These plants can also have some emissions associated with them, primarily the “rotten egg” smelling hydrogen sulfide, though the group notes that emissions from geothermal plants is significantly less than fossil fuel powered coal or natural gas plants.

“The exploitation of these reservoirs is frequently accompanied by detrimental impacts on the environment. Among these are the emission of toxic gases and chemical substances which result in the degradation of air quality, the threat of water pollution, damage to living organisms, and hazards to public health,” the Sierra Club wrote on its website.

Meanwhile, industry observers see potential for growth in the U.S.

To help promote the technological development of geothermal energy, the U.S. Energy Department established the Frontier Observatory for Research in Geothermal Energy (FORGE) program, which is designed to push forward with research and development into enhanced geothermal energy projects.

The fledgling geothermal industry has often received support from the oil and gas industry, since both require drilling and processing fluids.

“There is an obvious adjacency from the oil and gas industry,” Robertson-Tait said. “They have entered and left the geothermal industry and they are now back again.”

One issue facing geothermal energy is that it is often overshadowed by other renewable energy sources, Gylfadóttir said

“Wind and solar are much higher on the radar, and if we are going to increase the scale of global scale of renewable energy, we cannot afford to ignore the possibilities of geothermal energy,” she said. “In the U.S., wind and solar are expanding rapidly, while geothermal energy resources remain almost entirely untapped. The main obstacle is getting projects financed against the competition with other renewables.”