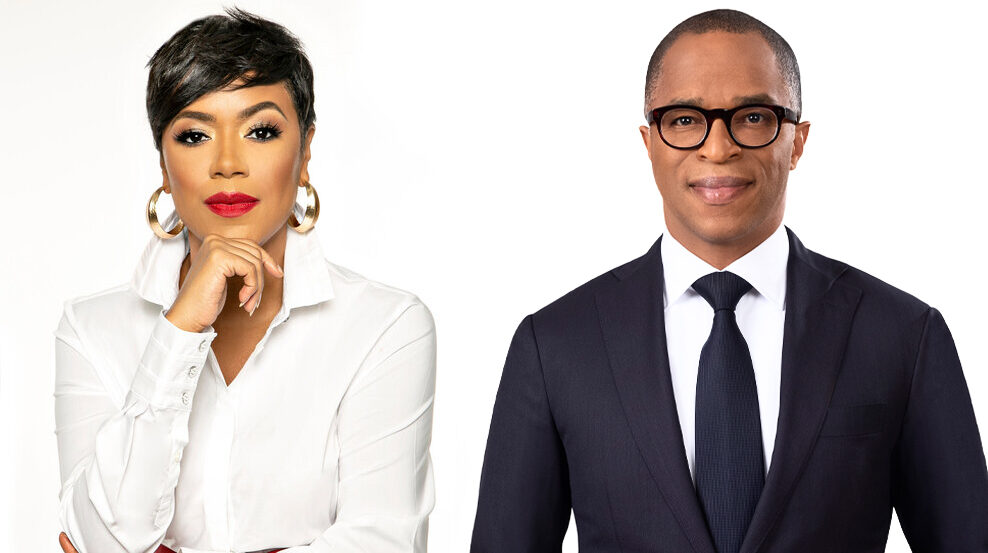 “I can’t believe it,” Jonathon Capehart told Bailey. “It’s one of those things, you know when you’re a little kid, and you have these dreams of what you want to be when you grow up and your dreams change over and over and over again.  (Eurweb.com)

MSNBC, the news-based television cable channel owned by the NBC Universal News Group division of NBCUniversal, has been lauded for its reputation for reporting of news, politics and commentary on topics that are tailormade for political news junkies.

Recently, the cable channel has undergone a seismic shift that will showcase more minority programming.

“I don’t know that any of us have fully comprehended the seismic shift that just occurred in news,” said Tiffany Cross, a producer and host who also has recently published her book, “Say It Louder! Black Voters, White Narratives and Saving Our Democracy.”

“I think it catapults MSNBC light years ahead of the competition. MSNBC has a vision to create the look of America on and off the screen.”

Jones, who currently oversees dayside and weekend programming for MSNBC, will have two new shows featuring people of color premiering on the network’s weekend slots.

The shows, which will be replacing Joy Reid’s “AM Joy” Saturday and Sunday slots, will have MSNBC’s hard-hitting, politically based commentary.

“Jonathan Capehart has been a longtime member of the MSNBC family, and his steadfast dedication to great journalism, along with Tiffany Cross’ fresh expert analysis, offer our MSNBC weekend morning audience the best of both worlds from two very different life and worldview experiences,” said MSNBC President Phil Griffin, for whom Jones will take over on Feb. 1.

She’s a 2020 Resident Fellow at the Harvard Kennedy School’s Institute of Politics and served as the D.C. Bureau Chief for BET Networks, according to her website www.tiffanydcross.com.

Additionally, she was an Associate Producer for CNN, has worked on the campaign trail and co-founded The Beat DC, a widely read, critically acclaimed platform. And now, is she thrilled about the prospect of having her own groundbreaking show.

“I’m very excited to join the landscape at this time,” Cross said in an exclusive interview with EUR’s Lee Bailey. “We have a new administration coming in where Black women have ascended to senior levels of government and also to the most senior levels of news, including Rashida Jones being promoted to President of MSNBC, so it really feels like a unique convergence of our sheer determination through the decades of being recognized. No one really gave us these things; we’ve earned them.”

Capehart, who will take over Joy Reid’s Sunday “AM Joy” timeslot, with “The Sunday Show with Jonathan Capehart,” was asked how he felt about a show being named after him.

“I can’t believe it,” Capehart told Bailey. “It’s one of those things, you know when you’re a little kid, and you have these dreams of what you want to be when you grow up and your dreams change over and over and over again.

I’ve known basically since I was 10 that this is what I wanted to do, and specifically having my own television show (was one of them). And to actually have it happen is something that I spent the last few weeks wrapping my head around. I’m still coming to grips that my dream is now coming true.”

Capehart is a Pulitzer Prize-winning journalist and a member of the Washington Post Editorial Board. He writes about politics and social issues and hosts the “Cape Up” podcast. As an MSNBC contributor, he also serves as a substitute anchor. He admits that coming up with his show’s name wasn’t as easy as he’d thought it would be.

“It wasn’t so much an obvious choice because my husband and I and even my Mom got into the act of trying to come up with names,” Capehart said. “In the middle of the night, with my mind racing with all these things, I kept thinking, well, what I want to do — I’m playing in this Sunday show space and what I want to do is sort of a different take on Sunday shows.

Suddenly he had a revelation. “Why don’t I just call it The Sunday Show?” he said with a laugh. “And so, I pitched it, and thank God, no one else had it.”

The importance of being a minority host isn’t lost on Capehart. Branding will play an essential role in the success of the show as well.

“What I love about the name is that it tells you exactly the kind of show you’re going to be watching,” he said. “On Sunday, people are watching ‘Meet the Press,’ ‘Face the Nation,’ ‘This Week,’ ‘The Lead,’ and we’re going to be playing in that same space.”

Most of the consumers who watch Sunday political shows are political junkies, according to Capehart. He hopes to capitalize on that trend.

“What they (consumers) come to us for is context,” said Capehart. “Why is a certain story important, and how does it fit into the larger conversation, and why should they care? And so that’s what I’m looking forward to doing — going through that with the audience.”

I’ve been in Washington for 13 years, I was in New York for 16 years before that, I was on the New York Daily News Editorial Board, so I bring my experience, but I also bring me — my identity — an African American, openly gay married man. I have a whole host of lived experiences that I will bring to the chair, and that — I hope and I think — will resonate with the audience.”

The Importance of Minority Anchors and Hosts on Television

Melissa Kearney, the former Director of the Hamilton Project at Brookings Institute, which seeks to advance “America’s promise of opportunity, prosperity and growth,” has produced a research work, “Role Models, Mentors and Media Influences,” with Phillip B. Levine.

In their study, they highlight the importance of role models, particularly for the minority community. “Role models,” as explained in the study, “can be a powerful force for social learning. They can affect the way people view themselves and the world around them and ultimately affect their decisions about how to conduct their lives. Role models influence the attitudes and behaviors of both children and adults.”

The potential impact on the minority community that shows such as “The Cross Connection with Tiffany Cross” and “The Sunday Show with Jonathan Capehart” could provide are vitally important for their influences on youth and others.

“The importance of having someone on television that looks like you can’t be understated. When I was a 10-year-old kid, and I was watching Tom Brokaw and Jane Pauley on ‘The Today Show, that’s what got me hooked on news,” Capehart said.

“But it wasn’t until Bryant Gumbel took over from Tom Brokaw when Brokaw became an anchor of ‘NBC Nightly News’, that I actually saw a Black person in that job,” Capehart said. “That was a signal to little Jonathan Capehart — ‘that hey wait a minute — this isn’t just something you think you can do; you can do it because there’s that Black guy there.

“It is my hope that young Black kids, young LGBTQ kids, can turn on the television and see someone that looks like them, shares their life experiences and know, just by me sitting in that chair that anything is possible.”

Cross is thrilled because this show can be a catalyst for more representation of Black Women in the media industry.

“How this will make a difference in time and influence the next generation is very humbling. I look to my left and look to my right and see so many other people that look like me, doing the most amazing things. It’s truly an honor to be among them.”

This story first appeared on EURweb