Jerman served 11 presidents, exuding dignity and devotion as one of the longest-tenured members of the White House.
By Demetrius Dillard December 11, 2020
Facebook
Twitter
Linkedin
Email 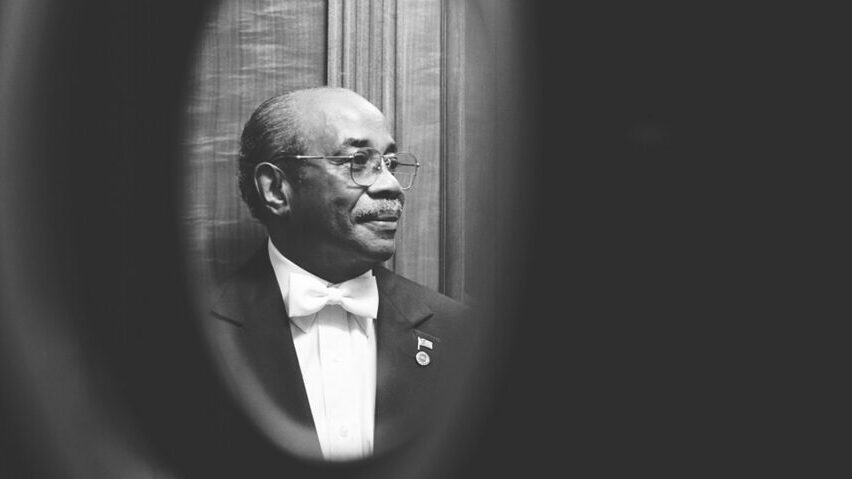 “When growing up, he never discussed politics,” Gay told CNN. “And never judged by the Republican or Democrat. It was all about the person independently and learning a person.” (Tina Hager, Public domain, via Wikimedia Commons)

WASHINGTON – The late Wilson Roosevelt Jerman, a former White House butler who served under 11 presidents, lived a life that exemplified what some may consider the most honorable attributes a human can possess: service, dignity and devotion.

Jerman served faithfully as a cleaner, doorman and butler for more than half a century; he exuded dignity in every area of his life and was devoted to bettering others’ lives within and outside of the confines of the White House.

Jerman began his career in the White House as a cleaner under the Dwight Eisenhower Administration in 1957 and went on to work in various capacities until his retirement during Barack Obama’s presidency in 2012.

For more than half of his life, Jerman was indeed a staple in the White House. He was a man who prided himself on delivering first-class service to White House occupants, often making them feel at home.

Encountering rough beginnings in rural North Carolina, Jerman dropped out of school in the seventh grade to help his family work on a farm.

After starting a family with his wife Gladys, he moved north to Washington, D.C., as many other Black Americans did during the Great Migration to pursue better opportunities. In the nation’s capital, Jerman would leave his mark on society as one of the longest-serving White House employees.

According to his granddaughter, Shanta Taylor Gay, Jerman was a man of authenticity who was quiet, “very giving” and never complained.

“When growing up, he never discussed politics,” Gay told CNN. “And never judged by the Republican or Democrat. It was all about the person independently and learning a person.”

Jerman, known by many as “Mr. Jerman,” touched countless lives and taught his children, grandchildren and great-grandchildren to remain faithful to self regardless of the life’s obstacles.

One of his grandchildren made it a point to further his legacy. Jamila Garrett wrote a tribute to Jerman in a poetry book she is authoring. “As nothing is permanent, I am releasing the dedication to my 3(rd) poetry book, “Slither a little early,” Garrett wrote in an Instagram post.

“This book is dedicated to Wilson Roosevelt Jerman: ‘Thank you for showing me how to live the definition of love. We are love. Rest In Peace Granddaddy. I will never stop pushing.’ Thank you.”

As someone whose legacy is built off staying true to self, establishing relationships and building trust, it came as no surprise that former First Lady Michelle Obama included Jerman in her latest published book, “Becoming.”

“With his kindness and care, Wilson Jerman helped make the White House a home for decades of First Families, including ours,” Obama wrote.

“His service to others — his willingness to go above and beyond for the country he loved and all those whose lives he touched — is a legacy worthy of his generous spirit. We were lucky to have known him. Barack and I send our sincerest love and prayers to his family.”

Jerman served during the Clinton administration for two terms. After Jerman died earlier this year, former First Lady Hillary Clinton took to social media to discuss how much Jerman meant to her.

“Bill [Clinton] and I were saddened to hear of the passing of Wilson Roosevelt Jerman at the age of 91 from COVID-19,” Hillary Clinton said on Twitter in May. “Jerman served as a White House butler across 11 presidencies and made generations of first families feel at home, including ours. Our warmest condolences to his loved ones.”

A recent issue of the Smithsonian Magazine contains a tribute to long-serving White House staff, as told by former First Lady Laura Bush.

“Many people don’t realize that members of the White House staff often stay for decades. The doorman who greeted us each morning, Wilson Roosevelt Jerman, served 11 presidents, from Dwight Eisenhower to Barack Obama,” Bush said.

“It must be jarring for the staffers when a new president moves in, but you’d never know it. They welcome the new family, and don’t miss a beat when a president comes home on Inauguration Day, whether it’s for the first or second time.

“That’s what they’re there for — to serve the president of the United States — and they’re very serious about it. They know they’re the stewards of the presidency itself.”