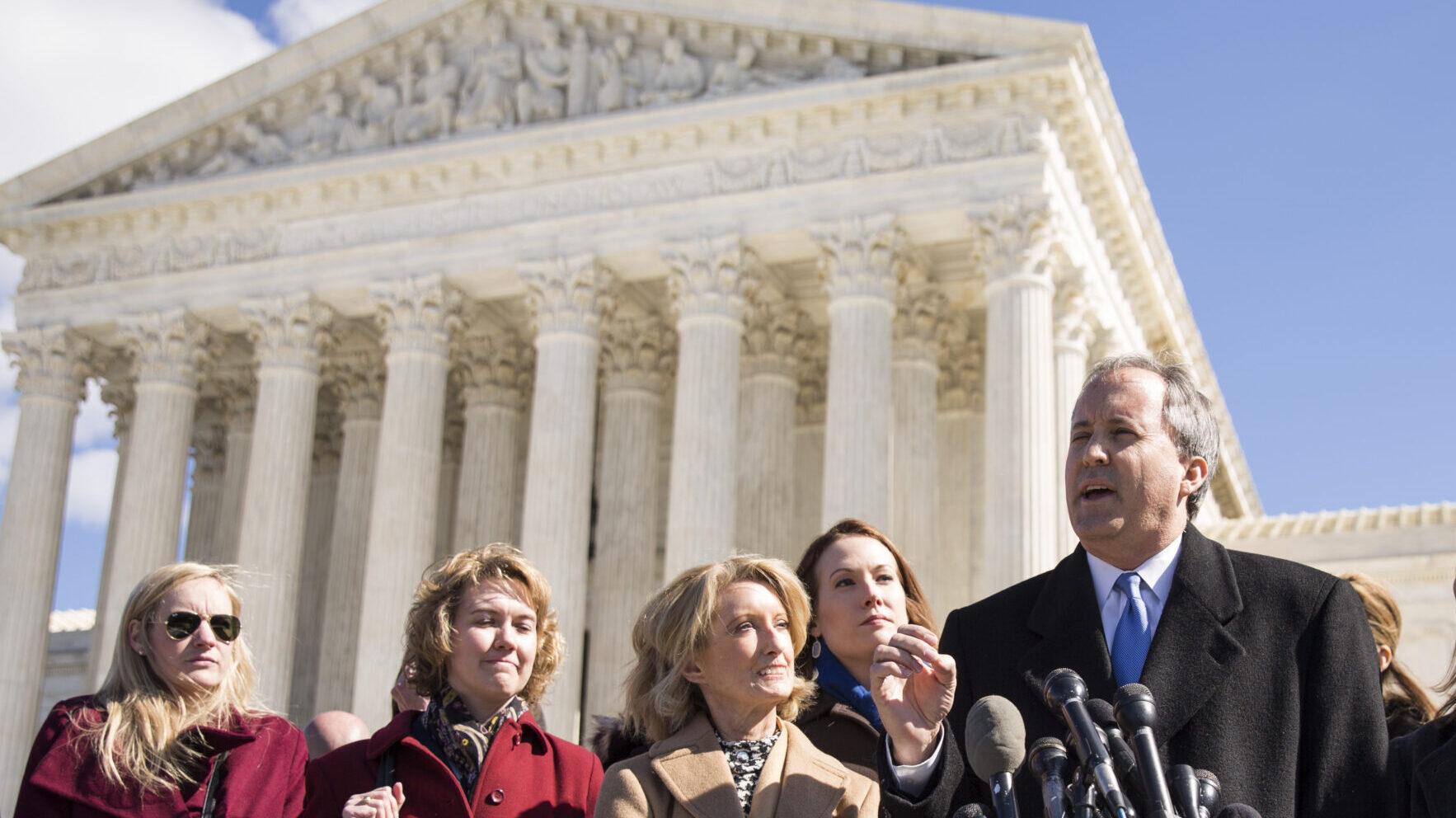 Four states accused of running illegal presidential elections responded to the charge on Thursday in a Supreme Court showdown over the outcome of the 2020 contest that could determine not only who sits in the Oval Office but how and when it’s decided.

Texas Attorney General Ken Paxton sued Wisconsin, Michigan, Pennsylvania, and Georgia on Tuesday, in a case that since has pitted 17 Republican-led states against 22 Democratic ones. The stakes are as high as any in America’s political system and hinge on the legality of millions of mail-in ballots.

If the high court acts, it could nullify the four states’ certified election results and render the Electoral College unable to choose a new president—kicking the decision to the new Congress. Former Vice President Joseph R. Biden expects to have 306 electoral votes to President Donald J. Trump’s 232, a mirror image of the 2016 outcome that sent the billionaire businessman to the White House. Electors are scheduled to meet in their state capitals on Dec. 14.

The Texas case challenging that outcome relies on the U.S. Constitution’s directions for how those electors are chosen in each state: “in such manner as the legislature thereof may direct.” State lawmakers ultimately control how presidential elections are run—not governors, secretaries of state or election boards.

Paxton argues that officials in the four swing states, which all swung for Biden, violated the U.S. Constitution by instituting election procedures—especially the widespread acceptance of mail-in ballots—that state legislatures didn’t create or green-light. And by running unconstitutional elections, he says, they disenfranchised Texas voters whose balloting procedures haven’t changed.

“Certain officials in the Defendant States presented the [Covid-19] pandemic as the justification for ignoring state laws regarding absentee and mail-in voting. The defendant states flooded their citizenry with tens of millions of ballot applications and ballots in derogation of statutory controls as to how they are lawfully received, evaluated, and counted,” Paxton argued, alleging “rampant illegality.”

His suit cites sworn testimony, videos, and unexplained mysteries as evidence of irregularities in the counting, handling, and witnessing of absentee ballots—and concludes that Biden had, statistically, a one in a quadrillion chance, raised to the fourth power, of carrying all four states.

By that logic, Trump’s lawyers claim the odds of Biden bouncing back in all four states after 3:00 a.m. on Nov. 4 is roughly equivalent to winning the Powerball lotto jackpot every day for a week.

Their math presumes that every batch of votes has the same impact on the outcome. Concentrations of Republican and Democratic voters vary from county to county and even from precinct to precinct, however. And since they don’t all report their results at the same time, vote totals often oscillate back and forth as ballots are counted—simulating a horse race that’s actually decided before election-watchers see the first returns online.

The four states, in responses filed Thursday, say they followed their laws, that vote tallies were confirmed in recounts, that lower courts dismissed legal challenges alleging irregularities as baseless, and that Texas has no standing to tell other states how to run their elections.

Georgia Attorney General Christopher Carr argued that “Georgia’s legislature enacted laws governing elections and election disputes, and the state and its officers have implemented and followed those laws.”

Carr noted that the results were confirmed by recounts and upheld in court challenges. “Texas nevertheless asks this court to transfer Georgia’s electoral powers to the federal judiciary. Respect for federalism and the constitutional design prohibits that transfer of power,” reads the Georgia reply brief.

Wisconsin’s response said Paxton’s lawsuit asked the Supreme Court to order “an extraordinary intrusion into Wisconsin’s and the other defendant States’ elections.”

“Texas’s bid to nullify that choice is devoid of a legal foundation or a factual basis,” Wisconsin Attorney General Joshua Kaul wrote. “Those votes have been counted, audited, and many have even been re-counted. There has been no indication of any fraud, or anything else that would call into question the reliability of the election results.”

Pennsylvania, the state of Biden’s birth, argued that Trump’s supporters were trying to create a “surreal alternate reality” in the wake of a hotly contested campaign, and that the Texas legal action is “a seditious abuse of the judicial process.”

Michigan disputed Texas’s core complaint, that state officials usurped power that belongs to legislators. “The challenge here is an unprecedented one, without factual foundation or a valid legal basis,” its lawyers wrote.

“If the Court issues the injunction Texas requests, it will upend the statutory process for the selection of presidential electors. Moreover, it will disenfranchise millions of Michigan voters in favor of the preferences of a handful of people who appear to be disappointed with the official results,” Michigan Attorney General Dana Nessel argued.

Pennsylvania Attorney General Josh Shapiro blasted those lawmakers in a tweet: “Add another 106 names to the list of spineless sycophants supporting a seditious abuse of the judicial process.”

Nessel, his Michigan counterpart, said on Twitter: “Texas AG Paxton and the 17 AGs who signed on to support him have sold their souls to a man who stands for nothing and who cares for no one, other than himself. I hope it was worth it.”

“Every legal vote matters,” Paxton replied. “Thank you to all these states who agree.”

The president, who in one tweet called the case “the big one,” later asked for “COURAGE & WISDOM from those that will be making one of the most important decisions in our Country’s history.”

In an unusual twist, Ohio filed a brief on behalf of neither party, asking only that the Supreme Court take the case and “decide, at the earliest available opportunity,” whether state officials and judges are acting unconstitutionally “when they change the rules by which presidential elections are run.”

Trump’s lawyers turned to a sniff-test argument, noting that the president won 12 million more votes than when he won in 2016, and claiming that he did better among non-white voters than any Republican since 1960.

But they also relied on a fallacy in arguing that the results were nonsensical because Trump won the historically key bellwether states of Ohio and Florida. “No candidate in history— Republican or Democrat—has ever lost the election after winning both States. And he won these traditional swing states by large margins,” the president’s lawyers argued.

GOP candidate Richard Nixon won both in 1960, but John F. Kennedy won the election. By Thursday night Trump was tweeting a different formulation, insisting that he couldn’t have lost to Biden because he won “Iowa, Florida and Ohio.”

Trump’s team cited a Rasmussen Poll showing that 47 percent of Americans, and 75 percent of Republicans, thought it likely or highly likely that Trump had the election stolen from him.

“Our country is deeply divided in ways that it arguably has not been seen since the election of 1860,” Trump’s lawyers argued.