Different groups have targeted education officials in the troubled province of Balochistan. 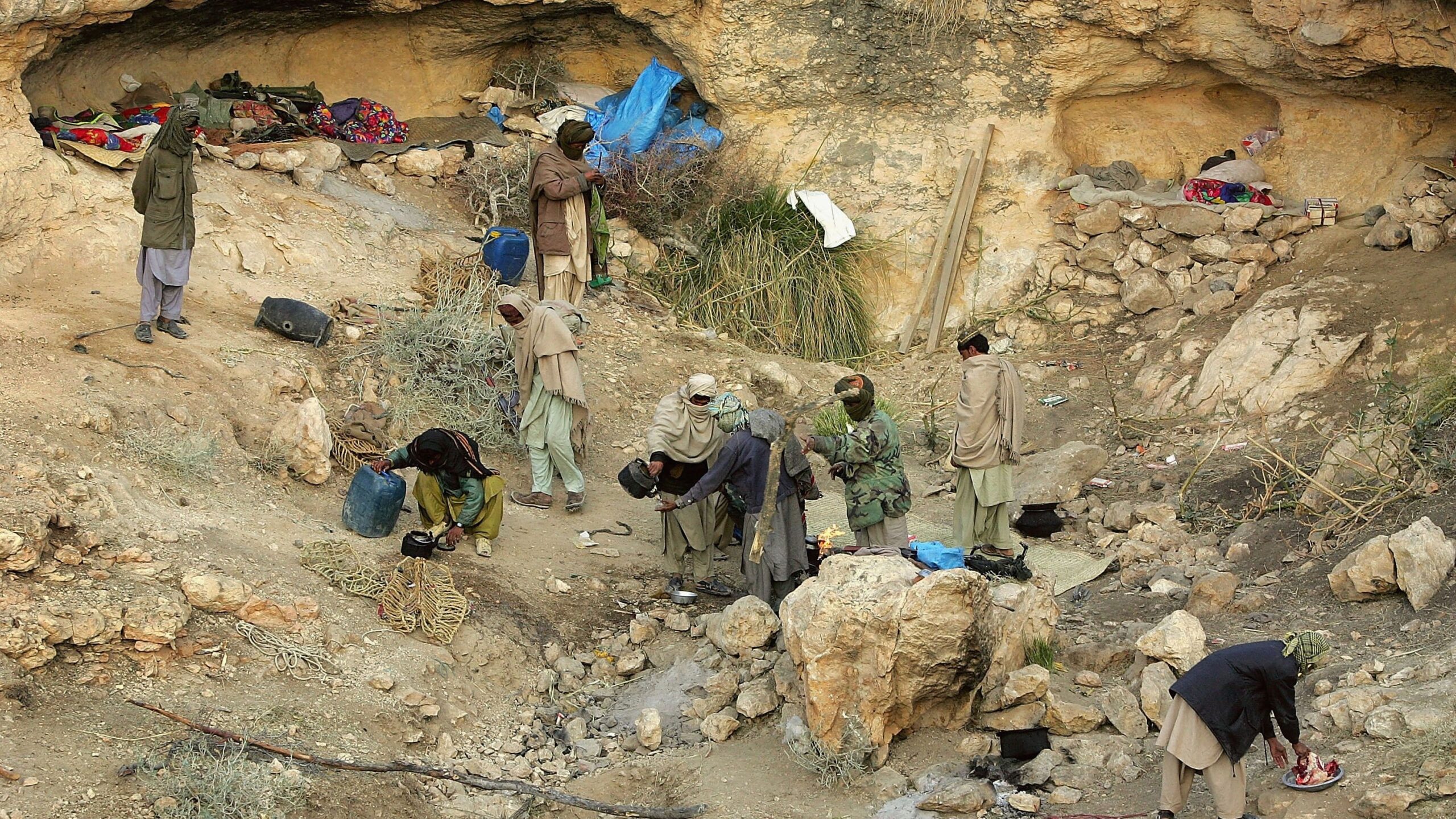 Marri tribal guerrillas begin to prepare a meal in their rebel camp outside of the town of Kahan in the Pakistani province of Balochistan. Courtesy: John Moore (Getty Images)

QUETTA — Shabbir Shahwani was one of three professors kidnapped on Nov. 29 while traveling from their university in Balochistan.

After being pulled from their car and taken to a remote area, Shahwani struggled with one question: Should he remove his blindfold or not?

“The decision would either grant me freedom or a bullet in my head,” he said.

Ultimately, the three found freedom after the harrowing episode.

Shahwani, an assistant professor at the University of Balochistan, and his colleagues were on their way to supervise candidates during an examination. They were taken to a deserted area several miles outside Quetta, the capital of the insurgency-plagued Balochistan province of Pakistan, and eventually released by their abductors.

The incident again brought attention to the deteriorating security situation in the southwestern province.

Shabbir Shahwani was traveling to Khuzdar, about 300 km (186 miles) south of Quetta, along with Liaquat Ali Sani, head of the Brahui Department at the university, and Nizam Baloch from the Chemistry Department.

“We left Quetta at sunrise, and after driving for an hour and a half we reached Mastung,” Shahwani told Zenger News. “As we neared Cadet College, we saw three cars parked on the side of the road. There were men — armed and masked — near them. The men signaled us to stop.”

The Mastung Road thoroughfare has heavy traffic going to or from Karachi, and it links to Iran.

“Sani did an introduction, explained where we were going and why,” said Shahwani. “One of the masked men started to abuse us and pulled Sani out of the car. We were also dragged out. They blindfolded us and put us in one of the cars. Professor Nizam Baloch and I realized professor Sani was not with us in the car.

“We were puzzled why three teachers traveling on an official duty would be abducted,” he said. “One of the armed men told us that we have been abducted for ransom and were being taken to Afghanistan. We told them that we were just teachers and did not have money to pay the ransom.”

The abductor spoke in Pashtun and Urdu, but his Pashtun dialect was not of a Balochi, the professor said. It was a dialect more common in the Khyber Pakhtunkhwa province, which is near Afghanistan.

After traveling for a couple of hours, the car finally stopped and the professors were dragged out. Still blindfolded, they were made to sit on the ground with their heads down.

“They told us that we were at the Pakistan-Afghanistan border,” said Shahwani. “Another group would come to take us away.” 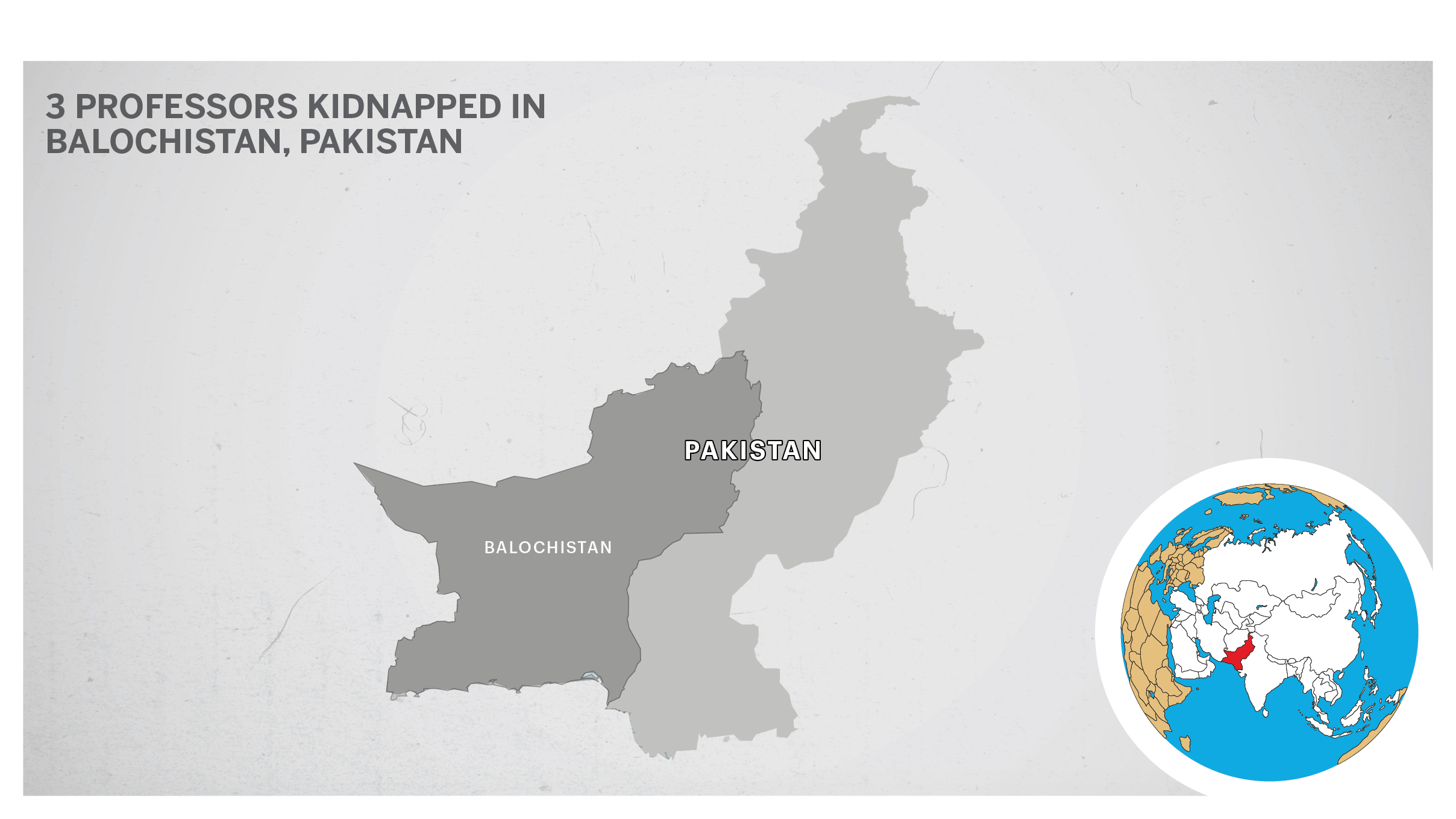 They were also instructed to not move, as someone was keeping watch. If they tried to remove their blindfolds, they would be shot, one of the abductors said.

The three professors sat for a while, despite hearing the cars driving away.

“The silence was deafening,” said Shahwani. “After some time I asked for permission to answer nature’s call, but there was no response.”

He asked several more time times, but still there was no response.

“It seemed like hours as I sat trying to reach a decision,” he said. “The decision that could either earn us our freedom or could get me killed.”

He gathered the courage to remove his blindfold, only to find that there were no abductors. The professors were is a deserted area, surrounded by mountains. Sani was not there, however.

“We had no idea where we were, but we started walking. After a couple of hours, we reached a dam. We climbed it and saw some houses in the distance.”

On reaching the houses, the professors learned they were in Aghburg, a small town with a population of 3,396. But, it was still on the Pakistan side of the border — not Afghanistan.

Shahwani and Baloch began walking back to Quetta. They were given a lift by a motorcyclist and returned safely.

Faculty members at the University of Balochistan held a protest demanding Sani’s release. He was released unharmed on Dec. 1.

Kidnappings are common in Balochistan, which has been the center of a separatist movement since the 1940s. The violence has increased considerably in the past decade.

On Feb. 2, 2009, John Solecki, then head of the UN High Commissioner for Refugees office in Quetta, was abducted along with a Pakistani staffer. He was released on Apr. 4, 2009, but the Pakistani staffer was killed. Balochistan Higher Education Secretary Abdullah Jan was abducted on March 14, 2017, while on census duty. He was later released.

Balochistan holds strategic importance for the China-Pakistan Economic Corridor, Beijing’s Belt and Road initiative, which seeks to connect China’s western province of Xinjiang with Gwadar, Balochistan, and China’s access to the Arabian Sea.

The Human Rights Commission of Pakistan stated in its fact-finding report that the enforced disappearance of citizens and dumping the bodies of victims of disappearance are among the most blatant violations of human rights in the province. Nationalists and victims’ families have blamed the state agencies.

“The general law and order situation has also deteriorated across the province. This context makes the solution to the challenges in Balochistan all the more difficult to achieve,” the report states. “The Commission has also highlighted that violations of human rights have certainly not been confined to any one side in the conflict, while noting that the state is obviously expected to hold itself to a higher standard.”