India's stock markets were also helped by a revival in consumer demand during the festive season in October-November Courtesy: Nick Chong (Unsplash)

Sensex, the BSE’s stock market index, hit a new high of 45,608, while Nifty, the broader National Stock Exchange index, settled at a peak of 13,393.

Despite the record highs, financial analysts and market experts are skeptical of a sustained bull run.

“The way the market is ignoring any unfavorable news flow and just focusing on the positives is a perfect characteristic of a bull market,” said Sameet Chavan, chief analyst, technical and derivatives, at Angel Broking. “But at the same time, as a trader, such a euphoric situation is difficult to ride after one point, because sooner or later, one surprising down move (especially overnight) can catch you on the wrong foot.”

“The current market rally is entirely liquidity driven, as foreign institutional investments are pushing up the markets,” said Dhirendra Kumar, founder and CEO of Value Research, an investment and stock market analysis firm.

Kumar said that if liquidity dries up for any reason, the market will not be able to sustain its high levels.

“I do find a lot of optimism in terms of the corporate earnings, as a lot of ground has been covered. But this is misplaced optimism,”   Kumar said.

“The meteoric rise of the markets in India is simply driven by money from the foreign institutional investments,” said Vidya Bala, founding partner and head of research at Prime Investor, a mutual fund research platform.

According to data from brokerage firm Motilal Oswal, India recorded foreign institutional investments worth $9.6 billion in November, the highest in a single month. In October, the figure was $2.5 billion. 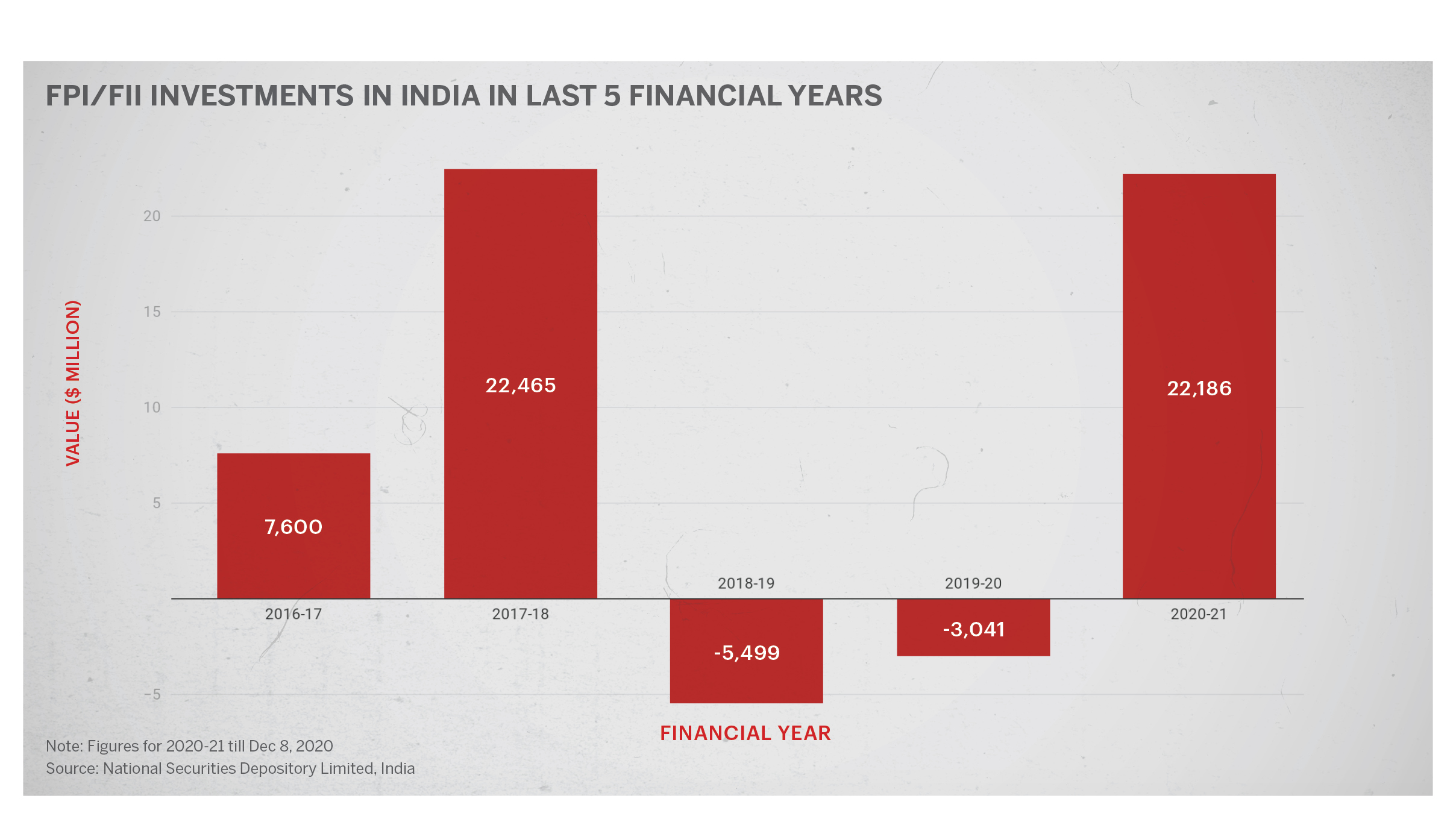 “The markets have been at record highs because the central banks the world over have slashed their interest rates. That liquidity is chasing returns and one portion is coming to India,” Bala said.

The U.S.Federal Reserve and the European Central Bank are holding the key rates at 0-0.25 percent.

India’s stock markets were also helped by a revival in consumer demand during the festive season in October-November. The second quarter of FY21, coinciding with the festive season, was one of the best quarters this year for corporate earnings in India as businesses began to shrug off their lockdown woes.

Data from The Dalal Street Investment Journal‘s 3,521 listed companies shows a 28 percent increase in sales in the second quarter over the previous quarter. However, on a year-on-year basis, the figure is down by nearly 7 percent.

Forecasting the curve of the Indian stock indices, Bala said, “As far as the fundamentals are concerned, there are key indicators that suggest the economy is bouncing back. But, the kind of rise we see in the market is not justified even if we take the expected market earnings of the next two years.”

Though the bourses are rallying on foreign institutional investments, India’s economy is in a technical recession, with two consecutive quarters of GDP contraction.

The Reserve Bank of India, the central bank, has revised real GDP growth for FY21 to -7.5 percent from -9.5 percent. The economy contracted 7.5 percent in the second quarter of FY21 compared with a 23.9 percent contraction in the first quarter, which was buoyed by the manufacturing sector, according to data from the National Statistical Office.

India’s inflation and unemployment levels continue to be high, putting a dent in consumer purchasing power.

While India’s retail inflation, measured by the Consumer Price Index, was 7.61 percent in October — the highest since May 2014 — the unemployment rate was 6.51 percent in November, compared with 6.98 percent in October, according to data from the Centre for Monitoring Indian Economy.

Inflation surpasses the target of 6 percent set by the central bank, which has pegged it at 6.8 percent and 5.8 percent, respectively for the third and fourth quarters of FY21. In addition, nearly 21 million salaried employees lost their jobs between April and August, according to the employment data.

The market rally comes at a time when the government is faced with farmers’ protests across India. The new farm laws, according to farmers unions, will allow corporate entities to buy directly from farmers, bypassing the markets governed by state laws. The farmers are also concerned that the government will scrap the minimum support price, which helps farmers get a minimum assured price for part of their crop in case of adversity.