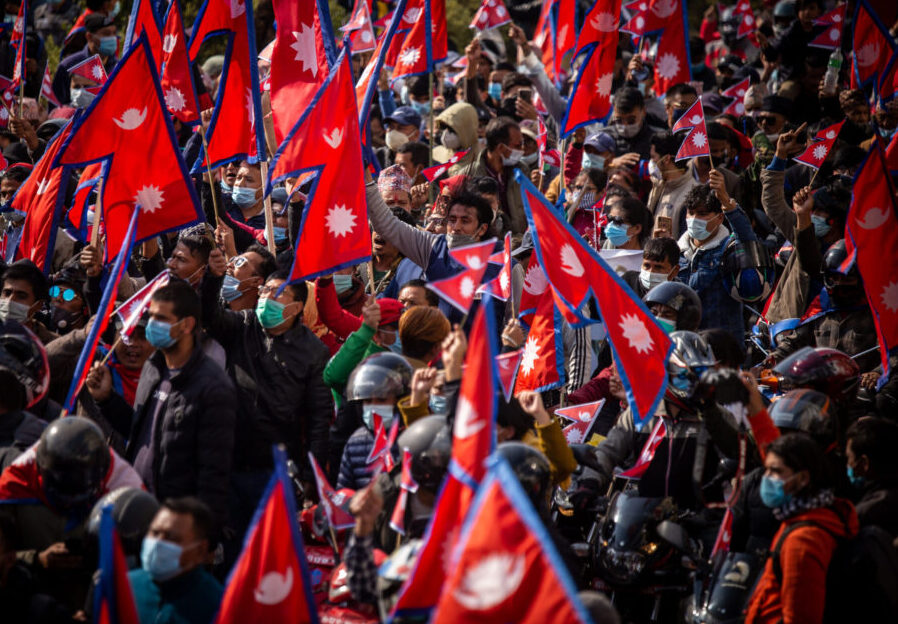 KATHMANDU, Nepal – A mass protest demanding the restoration of the monarchy took place in Kathmandu, Nepal’s capital, on Dec. 5. Thousands of pro- monarchy protestors from all over the country gathered at Maitighar, Kathmandu, and walked toward New Baneshwor, where the federal parliament building is located.

The demonstrators chanted slogans such as “King, please come back and save the country,” “We want the King,” and “Declare Nepal as a Hindu state.”

The demonstration was organized by the National Civic Moment Committee 2020. The protestors held national flag of Nepal and placards of the late King Prithivi Narayan Shah, the first Shah King of unified Nepal, who is also considered as the founding father of modern Nepal.

The demonstrators also chanted slogans against the currently governing Nepal Communist Party, which became the ruling party after a merger between a communist alliance of CPN-UML and the CPN Maoist after the 2017 election.

The administration under the Prime Minister Khadga Prasad Sharma Oli has been heavily criticized as it faces several charges, including protecting the corrupt, failing to deliver according to the constitution and posing a threat to the principles and norms of the democracy.

Other pro-monarchy demonstrations have taken place in various major cities of Nepal, including Pokhara and Butwal.

Nepal was ruled by the Shah dynasty starting in 1768, with Prithivi Narayan Shah serving as the first king. His ancestors continued to rule Nepal until May 2008, when King Gyanendra was dethroned after the people’s movement of that same year. A new constitution was voted in 2008 by the Nepalese Parliament, declaring the abolition of monarchy and the new parliament republic became the Nepalese political framework.

Why are people demanding restoration of a monarchy?

The weak performance of the current ruling Nepal Communist Party, who’ve been heavily criticized for infighting, corruption, failure to address the people’s needs and the party’s poor handling of the pandemic.

Who are these people and where do they come from?

These demonstrations are carried out by a pro-royalist group of people named the National Civic Movement Committee. They have been supported by the Rastriya Prajatantra Party, which is a monarchist and Hindu nationalist political party in Nepal. Despite the end of the royal regime in 2008, there are many citizens in Nepal who still favor the royal family and monarchy system in Nepal.

Last weekend’s protest is the largest in favor of the monarchy since a new constitution was ratified in 2015 in Nepal.