Pakistan bids goodbye to its only Asian elephant that suffered severe mental and physical distress due to ill-treatment
By Rvel Zahid December 6, 2020
Facebook
Twitter
Linkedin
Email 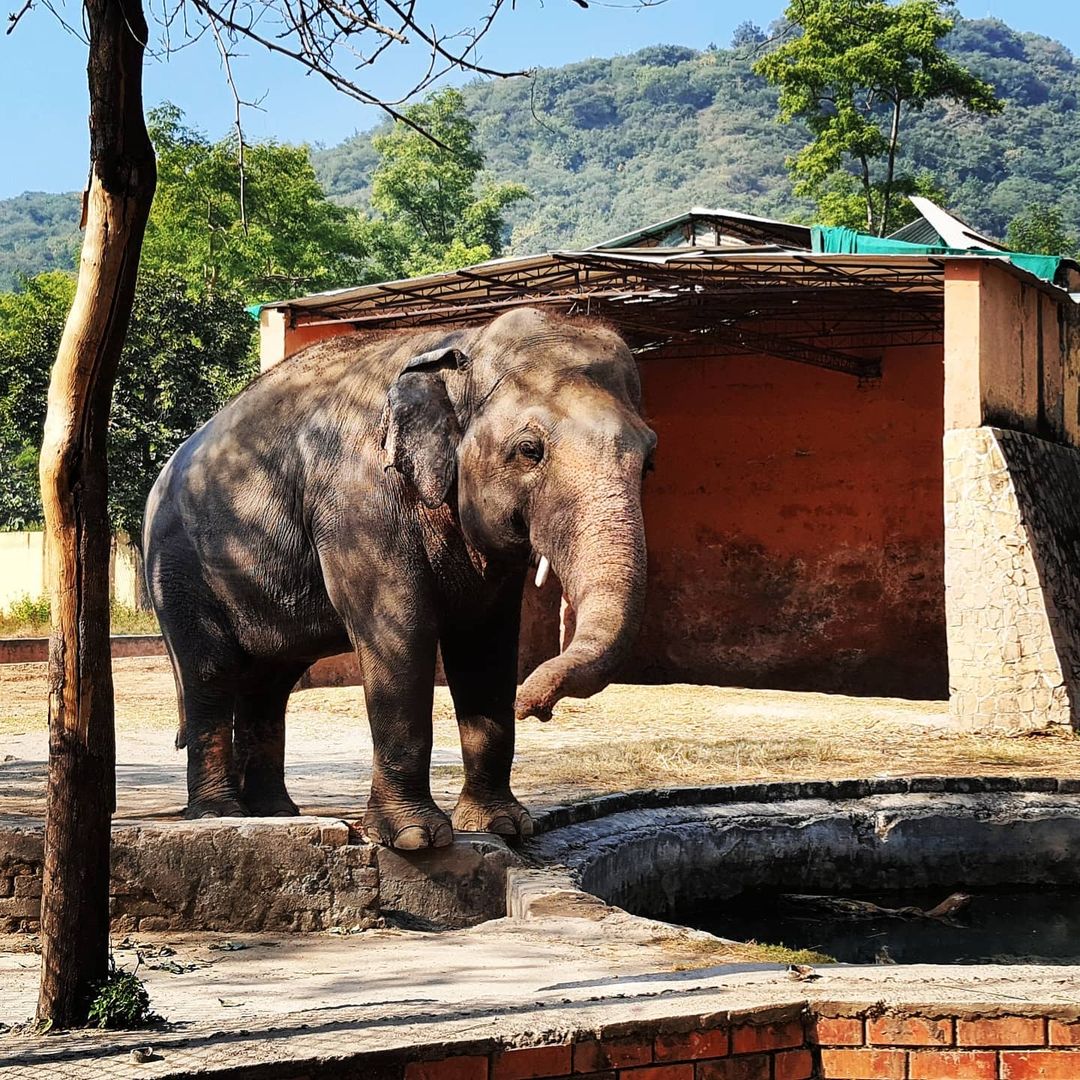 Kaavan was the only Asiatic elephant in Pakistan. Photo: Muhammad Bin Naveed

After living for 35 years under abysmal conditions at the Marghazar Islamabad Zoo, Kaavan — dubbed the loneliest elephant — has been moved to the Cambodia Wildlife Sanctuary in Siem Reap.

The 36-year-old elephant’s misery and isolation are coming to an end thanks to the efforts of Four Paws International, American businessman Eric S. Margolis, Islamabad Wildlife Management Board (IWMB), and the non-profit Free The Wild— co-founded by American pop singer and Oscar-winning actress ‘Cher’ who had been highlighting Kaavan’s case since 2016.

Cher was present in Islamabad to see the much-anticipated moment after her four-year ‘Free Kaavan’ campaign. She accompanied the elephant, that she holds dear, on the 4000 kilometers (ca. 2,485 mi) journey to Cambodia.

Kaavan had been living in Islamabad Zoo since 1985 when he was only a year old. His woes increased when his partner ‘Saheli’ died in 2012. Ever since, Kaavan was living alone in the zoo. He was chained, had cracked and infected nails and severe mental distress that manifested as frequent head-bobbing movements.

He did not receive proper veterinary care, lived in an unsafe enclosure, and without a dedicated caretaker. The only Asian elephant in Pakistan was neglected by the zoo management, fed with a substandard diet that made him obese, and the absence of trained veterinarians contributed to the deterioration of his health.

The Islamabad High Court (IHC) in a verdict mentioned that the conditions at the zoo were not in line with the standards laid down in the ‘Prevention of Cruelty to Animals Act 1890, and the Wildlife Ordinance of 1979’.

“The manner in which living beings have been treated at the Islamabad Marghazar Zoo in the past may be a tip of the iceberg. It is ironic that food meant for the helpless inmates of the zoo was also reported to be stolen. It reflects a mindset, which does not have empathy for vulnerable living creatures caged in deplorable conditions,” said Islamabad High Court Chief Justice Athar Minallah.

Finally, Kaavan’s ordeal is coming to an end as he will be living in a 25,0000-acre sanctuary and is set to mingle with a new family, which he had been yearning for years.

Dr. Amir Khalil, a veterinarian and director of the project development for Four Paws International, has been working on Kaavan’s entire rehabilitation process with his team for the last three months to make him fit for travel. He sang Kaavan’s favorite jazz track — ‘My Way’ by Frank Sinatra — to mellow the giant.

“Kaavan should be retired now and join other elephants,” said Khalil.

“The first time I came to Pakistan was in 2010, then again in 2016 to assess Kaavan. This year I evaluated his health to figure out if he could be relocated to the sanctuary.”

“He had a problem in his nails which could lead to an infection that is dangerous for elephants. I started to build a relationship with him, so that he begins to trust and forgive us human beings (for the mistreatment).

“Kaavan had stereotypical behavior which signaled mental distress,” said Dr Khalil. “When an animal is kept in a small space, especially a giant animal like this, he starts to move his head left and right, and sometimes for 18 hours per day.”

“I have spent 35 years taking care of various animals but I saw an elephant crying for the first time,” Dr Khalil said.

“Animals have a long memory; they never forget, but they can forgive, and Kaavan has forgiven us. He started to hear music, he began to allow people to touch him.  However, Kaavan only sees humans, he needs members of his kind to live a normal life,” said Khalil who is confident that Kaavan will have ample space in the sanctuary in Cambodia and could form a herd.

“There Kaavan will have a more species-appropriate space in which to roam, and he will also have three companions with whom he can form a herd. We thank the Pakistani community as well as authorities for their support over the last months,” said Khalil.

Four Paws official Lisa Stobier informed that after the vet check on September 4, Kaavan was considered fit for traveling and thereafter preparations were underway to complete the gigantic task.

“Kaavan was obese, around 5.5 tons, but he is now following a new diet and is better,” said Stobier. “Together with the Islamabad Wildlife Management board, we prepared for the relocation, which was a huge logistics challenge. After the vet check from September 4 was done by Dr Frank Goeritz from the Leibniz Institute for Zoo and Wildlife Research, it was reported that Kaavan was fit for travel.”

Stobier highlighted the obstacles in moving Kaavan from Islamabad to Cambodia as there was a lobby who wanted him to remain in Pakistan—despite not having a proper sanctuary.

“Although there is this (court) order, there is in parallel also a strong lobby against his relocation,” said Stobier.

Animal Rights Activist Asna Qureshi is overjoyed that the abused soul is going to start a new life and lauds the efforts of the Pakistan government.

“I am overjoyed that the abused soul is getting a new beginning,” said Qureshi. “Wherever Kaavan is, I want him happy and hopeful about life. Yes, what the poor soul endured should have been prevented but I pray that he forgives us for this atrocity and considers our collective effort as mitigation.”

Qureshi sees Kaavan’s sacrifice as a stimulus to improve the conditions of zoos across the country and a case that will draw the Pakistan government’s attention towards the plight of animals and the precarious state of zoos in the country.

“Though what Kaavan faced should not have happened but this one case has triggered petitions against zoos in Punjab and Sindh,” said Qureshi. “His suffering brought global attention to the plight of zoo animals in Pakistan and the Pakistani animal rights activists have come together to rescue all of them now. The process is slow and gathering support for animals is tedious in our society, but we are doing our best with the limited support and resources we have available for the animal welfare cause. Think of it like this; Kaavan is the Mandela for his kind. We love you Kaavan, enjoy your freedom, and we are truly sorry for not rising up earlier.”

Ayeza Haider, another animal rights activist, praised the IHC judgement from judge Athar Minallah but is ambivalent on Kaavan’s exit from Pakistan.

“I have mixed feelings on Kaavan’s departure,” said Haider.  “On one hand, I’m happy that he is on his way to freedom and a better life but on the other hand, I feel a bit sad that he is leaving us. We could have provided him a sanctuary here as we have plenty of beautiful places but the truth is, in the time of economic crisis, humans take priority in the eyes of the government, and they were not ready to spend a huge amount just for Kaavan.”

“It is understandable although a bit sad that due to economic constraints plus lack of expertise, we had to let him go. One day when we are economically stable, we would like our government to ban all zoos and shift all captured animals to sanctuaries that are closer to their natural environment. The zoo is a prison for animals and wild animals should belong only in the wild!”
The zoo management’s incompetence and inadequate facilities made headlines in July 2020 when heart-wrenching videos of two lions fighting a fire in their cage sparked uproar. Subsequently, IHC ordered the closure of the zoo owing to the poor conditions. The lions died of suffocation and smoke inhalation. Dozens of animals have died at Islamabad Zoo over the years but the negligence of zoo management came under the spotlight this year.

The Islamabad Zoo will be revamped and made into a proper sanctuary in a few years’ time and then other animals will come back but Kaavan is gone forever from Pakistan.
(Edited by Anindita Ghosh and Sid Roy)