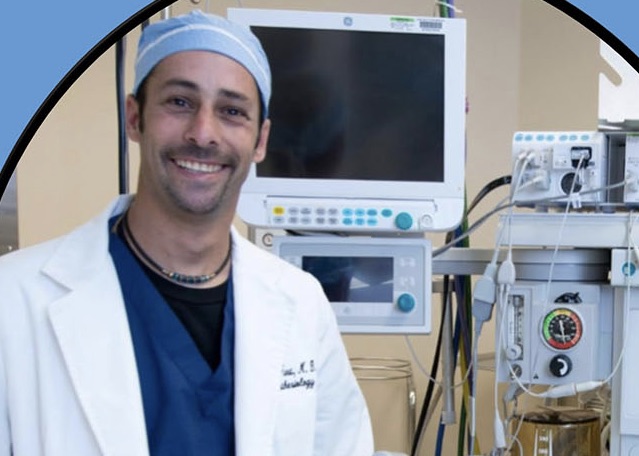 Ex-sushi salesman presenting himself as Chief Medical Director, tested stars for Covid-19 on the set of “Truth Be Told". (Endeavor Content)

The name of the AppleTV+ streaming series is “Truth Be Told,” but stars Octavia Spencer and Kate Hudson weren’t told the truth. Only after he was fired did they learn that Lucas Furst, the doctor who had been on-set to test them and other actors, producers and crew for Covid-19, wasn’t licensed to practice medicine in California. The show’s producers didn’t tell anyone that Furst was a former sushi salesman.

Endeavor Content, the unit of the famed William Morris Endeavor talent agency that produces “Truth Be Told,” contracted with Furst’s Los Angeles firm in September to provide health care professionals on set to test for Covid-19. The company’s staff tested everyone for two months, some on a daily basis.

Endeavor fired Furst on November 17. The new medical team that replaced him found that an actor he had cleared to work just 24 hours earlier—without any testing—was positive for Covid-19.

Because Furst graduated from Xavier University School of Medicine on the Caribbean island of Bonaire in 2009, he is entitled to call himself a doctor and append the initials “MD” to his name. The school’s website still shows a graduation photo that includes Furst and his 12 classmates that year. But Furst has never had an active medical license, he admitted during a 2019 interview for a secretarial job. Film producer Matty Beckerman, his business partner at Medical Placement Association, also told Zenger News that Furst has never been licensed. Furst did not respond to repeated requests for an interview.

Beckerman, Furst’s co-founding partner at Medical Placement Association, denies any wrongdoing by Furst or their company and told Zenger that allegations that Furst acted improperly are “not true whatsoever.”

Furst was “not practicing medicine on set” but only swabbing cast and crew members for Covid-19 tests, said Cathy Beckerman, a Medical Placement Association executive who is married to Matty Beckerman. California law requires that all such tests destined for laboratories be conducted under the supervision of state-licensed doctors, which Furst is not. Mr. Beckerman claimed a licensed medical doctor supervised his firm’s Covid-19 testing. He did not name the doctor. A supervisor at One Lab LLC, a commercial lab where Furst delivered Covid-19 test swabs, confirmed that “Dr. Lucas Furst, MD,” and no other doctor, was listed there as the supervising physician.

Furst and his firm billed Endeavor Content nearly $26,000 per week in fixed costs, according to a copy of a contract reviewed by Zenger. The weekly cost of the Covid-19 tests themselves added as much as another $150,000, according to the same contract.

Furst made frequent appearances on the Endeavor Content set at Paramount. He appears in surgical scrubs in a PowerPoint presentation created by an offsite consultant and distributed by Endeavor’s production staff, which features him as the leader of the production’s “Health and Safety Team.” The PowerPoint deck describes him as a “Chief Medical Director” who has “[w]orked within hospital systems as a higher-level physician.” Furst’s most recent Facebook profile picture showed him posing in front of a hospital emergency room door with a stethoscope around his neck.

Furst bragged on the Paramount lot that he had put a stent into a child’s brain at Children’s Hospital in Los Angeles. Dr. Robert Adler, the hospital’s chief medical officer, told Zenger that Furst had never performed pediatric brain surgery there. “To perform an operation like that you must be licensed as a neurological surgeon,” said Dr. Adler. After checking with his staff, he said: “We have absolutely no record of Lucas Furst.”

In its class notes section (typically submitted by alumni themselves), the alumni magazine of Furst’s undergraduate alma mater, Lynn University in Boca Raton, Florida, reported in 2005 that he “graduated from the University of Illinois at Chicago College of Medicine in 2002.” The registrar’s office there told Zenger that no one with his name ever enrolled there. “[We] do not have a Lucas Furst in our database for undergrad, graduate or medical school. Never have,” said Christine Zimmerman, the medical school’s assistant director of records and registration.

In order to practice medicine legally in the U.S., a doctor must have an active license issued by a medical board in his or her state or territory. The Medical Board of California‘s licensing rules cover Hollywood and the rest of the state for physicians, physician assistants, nurse practitioners, nurse-midwives and other similar health professionals.

The production for “Truth Be Told” was underway in a hot spot for Covid-19. This week Southern California announced a new round of business closures and other safety measures ordered by state and local governments. Los Angeles County, which includes Hollywood, is experiencing a “steep acceleration of Covid-19 transmission and hospitalizations,” according to the county’s public health department. About 13 percent of all Covid-19 tests in the county come back from a lab with positive results, the agency said on December 2.

By the time Furst became the “Truth Be told” set’s health and safety team leader in September, his résumé included a sushi-in-a-tube enterprise called Sushi Popper and a failed addiction detox clinic venture—and $162,000 in credit card debt, according to his 2012 federal bankruptcy filing. Lawsuits in Ohio and New Jersey accused him of embezzling some $800,000, relying on an admission Furst signed in February 2019 that he “secretively and fraudulently made substantial and unauthorized distributions of funds” from Medical Training Group LLC. Furst’s attorneys later claimed in federal court that he had signed the statement under duress. The lawsuits appear to be nearing settlements.

Endeavor Content had day-to-day control of the “Truth Be Told”physical production, reporting to Apple+ on financial and creative considerations and also to Peter Chernin’s Chernin Entertainment and Reese Witherspoon’s Hello Sunshine on creative decisions. Paramount Pictures rented a sound stage and some offices to Endeavor Content but was not involved in decision-making. There is no indication that either Chernin or Witherspoon visited the set.

(Due to Covid-19 precautions, many television and film productions are “closed sets,” with production company executives and producers communicating with their staffs on set via Zoom.)

Before the Covid-19 pandemic struck in early 2020, Furst and Matty Beckerman, who are cousins, were at a low point. Furst’s venture helping foreign medical students find hospital residencies in the U.S. had long been mired in lawsuits where a different business partner accused him of embezzlement. In addition, President Trump’s travel restrictions made it difficult for many foreign medical students to visit the United States.

And with none of his film projects in production, Beckerman hunted for innovative ways to use his studio contacts.

He soon found it. After California Gov. Gavin Newsom shut down film and TV production in March 2020, the production unions published a white paper in June setting out new minimum safety standards. The race was on for studios to find doctors to reassure regulators and unions that they could safely reopen. Since the standards were new, no firm had a lock on the studio contracts—creating an opportunity for Beckerman and Furst.

They signed a deal with Endeavor Content in September 2020 through Medical Placement Association, their company formed on March 21, 2019 in Delaware, according to that state’s online corporations directory.

Endeavor Content was eager to resume production of Season 2 of “Truth Be Told,” a true-crime thriller that streams on Apple+. Onsite Covid-19 testing began in September. Medical Placement Association’s wide-ranging deal with Endeavor Content covered health and safety planning, pre-production logistics and compliance with union guidelines, according to the contract reviewed by Zenger. The agreement anticipated up to 1,000 Covid-19 tests each week at a cost of about $150,000.

Furst and Beckerman could bill for an additional $25,800 per week for staff and equipment, including $15,000 to operate a union-mandated Health and Safety Unit on the set; $5,000 for a Health Safety Supervisor; $2,750 to train testing personnel; $1,560 for “Hall Monitors” to enforce social distancing, and another $1,560 for cleaners to sterilize doorknobs, according to the contract.

Beckerman and Furst also provided an a la carte menu at premium prices. For an additional $300,000, Medical Placement Association offered “Truth Be Told” producers a dedicated mobile lab in an on-set trailer to deliver test results in six hours or less. Beckerman and Furst’s firm also offered “concierge testing” at home or anywhere in the U.S., with results in 12-24 hours, for $550-750 apiece. It is unclear how many of these additional services the producers used, but production costs soon ballooned.

Ms. Beckerman also accused Endeavor of firing Furst because he is “a white male.” Endeavor “requested specifically—which they couldn’t put in writing because it’s illegal—they specifically requested a black woman,” she said. “They thought Octavia Spencer would be more comfortable with a black woman.”

Furst’s participation “was an issue from the beginning,” said Ms. Beckerman. “He didn’t meet that diversity quota.”

Furst has claimed to wear many hats. In addition to selling sushi and co-founding his Las Vegas rehab center, he wrote on his LinkedIn profile and in an online résumé on TheLadders.com, a job-hunting website, that he was Associate Dean of Clinical Medicine at Avalon University from 2005 to 2013. Until 2009 Furst was still in medical school—at Avalon, which he attended when it was called Xavier University School of Medicine and operated on Bonaire.

On LinkedIn, Furst claimed he attended Drexel University from 2000 to 2004, receiving a Master of Health Administration degree. On the same page, he claimed that from 2000 to 2008 he was earning an MD and conducting research at Rush Medical College of the Rush University Medical Center in Chicago. (He also claimed to have trained as a chef at Le Cordon Bleu College of Culinary Arts, which is headquartered in Paris.)

The registrars’ offices at Drexel and Rush Medical College refer requests for student record verification to the National Student Clearinghouse, which could not locate any record of Lucas Furst enrolling in a graduate program at either school.

Furst’s résumé on TheLadders.com included the claim that he graduated from “San Francisco Javier Xavier University School of Medicine,” which doesn’t exist, according to the Association of American Medical Colleges. That résumé also described his most recent job as Operations Director at Axis Clinical Trials, a respected Los Angeles medical research firm.

Axis CEO Lydie Hazan, a licensed doctor since 1994, said she met Furst when he answered an ad for a low-paying administrative job. “He was not Operations Director,” Hazan said. “He was a secretary on the administrative side and had nothing to do with the medical side of Axis. He worked for me for three weeks in June 2019.”

Hazan added: “He told me he was not a doctor and had never been licensed.”

She provided Zenger with the résumé Furst showed her during his job interview, which included “Associate Dean” among his qualifications. It also said he graduated from “Xavier University School of Medicine, Cincinnati, OH.” That university’s list of graduate-level programs includes a nursing program but no medical school. On that same résumé Furst omitted any mention of a Drexel University degree, substituting instead a Master of Health Services Administration from Medical University of the Americas on the island of Nevis, West Indies.

Shortly after Zenger first contacted his business partners on November 23, Furst deleted the social media accounts that gave life to his range of online personas. Left standing, however, is his acting and modeling profile on ExploreTalent.com, a Hollywood audition clearinghouse website where he claims to be a pilot, a scuba instructor and a skydiver.

“I have been in and out of the bmovie bussiness [sic] for some time,” Furst says on his profile page. “I would like the opportunity to act in a commercial or movie.”

Are you an eyewitness? Email [email protected].