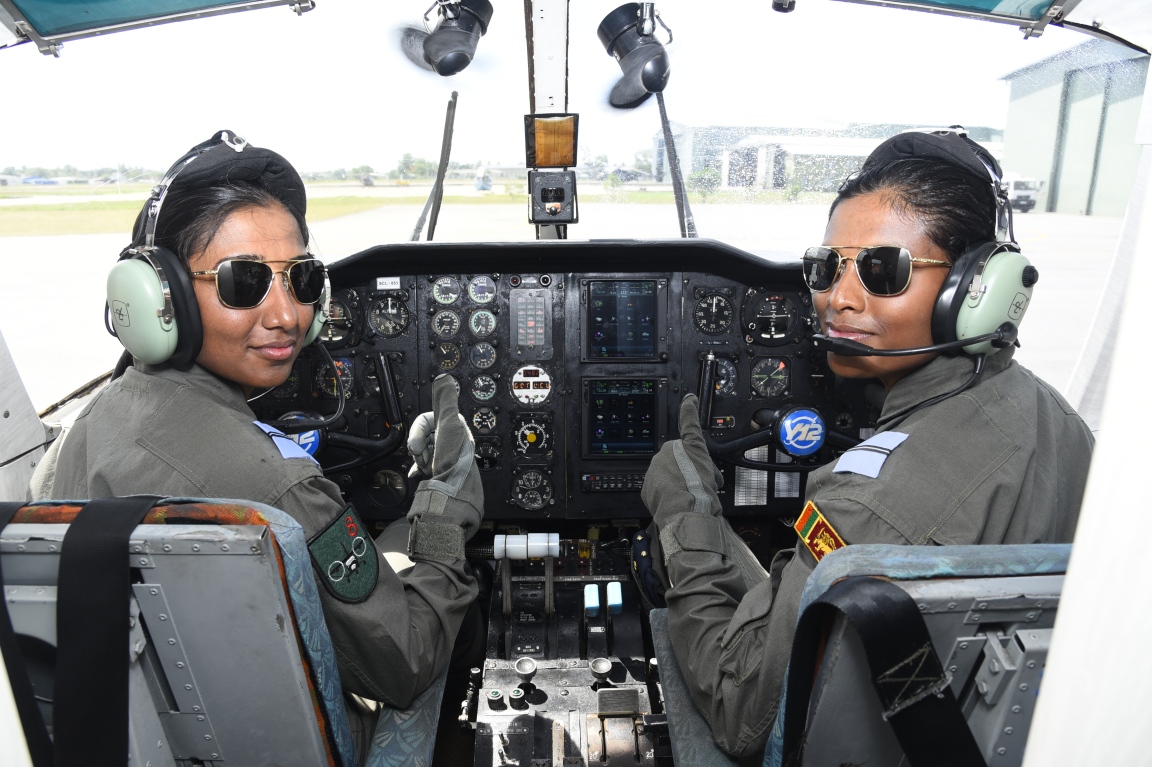 Pavithra and Rangana had to undergo training for two years. First, a rigorous combat training at the base in Diyatalawa; then academic training in China Bay at Trincomalee, before heading to the Indian Air Force Academy in Hyderabad, India, for their final year of training.

“The delay in commissioning female pilots was partly because of the war,” said Captain Dushan Wijesinghe, the spokesperson of SLAF.

Sri Lanka fought a civil war against the Liberation of Tamil Tiger Eelam (LTTE) for 30 years, a terrorist outfit that was infamous for using women for its suicide attacks.

“The retirement age for women is 15 years after they are commissioned,” said Wijesinghe. “Most of them would probably have retired even before that because of personal reasons like marriage and pregnancy. The Air Force does not allow a woman to practice during the pregnancy period and for another one year after delivery.”

“As much as the SLAF may have wanted to commission more female pilots, concerns about security lapses had to be taken into consideration. Hence, the delay,” said Wijesinghe. “While men in the SLAF would be able to adapt to emergencies, it may have been difficult for women committed to household work to do the same.”

The World Economic Forum Gender Gap Report in 2020 placed Sri Lanka on the 102nd rank out of 153 indicating an unequal opportunity for males and females in categories such as health, education, economy, and politics.

“There is an equal number of males and females in the US Air Force. We (Sri Lanka) on the contrary have cultural barriers,” Wijesinghe said.

Rangana feels that one should be able to balance out their professional and personal life equally and that sacrificing one for another is not required.

“Our Sri Lankan culture demands and expects women to be confined to kitchens,” said Rangana who comes from an “air force family.” “My mother quit the air force after I was born because she had to take care of me.”

Her parents were in the medical team of the air force and Rangana’s dream to be a part of the forces started young.

“I wanted to be a part of the medical team too; I had no intention of becoming a pilot,” said Rangana.

“My results were not good enough to join a medical college and today I’m thankful for it,” she said laughing.

With their training academies as far away as 178 miles (ca. 286 km) from their hometown, homesickness was hard to deal with.

“Letters were the primary mode of contact with our families and it was hard, especially, in the first six months of combat training as that was our first time away from home,” said Pavithra.

Pavithra, who hails from Kandy, a town situated 75 miles (ca. 121 km) North of Colombo, recollects the day she was selected by the Air Force for an opening for a lady pilot.

“At first my parents were apprehensive of my decision to join the forces,” she said speaking to Zenger News.

“They wondered if I would be able to cope because I was a woman, although they agreed later,” she said.

“It became harder when we left for India. It was a new world, but our Indian instructors were extremely encouraging. They understood that we had a language barrier and were very patient with us while they mentored us,” recalls Pavithra.

Both Rangana and Pavithra were trained in India on the Pilatus PC 7 training aircraft that was far more sophisticated than the ones they had used in Sri Lanka.

“I still had doubts in my capability until my training was over and I only gained confidence after my first solo flight,” said Pavithra.

Pavithra’s colleague Rangana had failed her first solo take and said she was feeling embarrassed about it but the instructors had called both their landings a good one.

“My first flying session lasted a little over an hour and I have no recollection of what happened in that one hour because I was so scared,” said Rangana. “But my brain was processing the information. And shortly after that, I started falling in love with flying.”

Rangana and Pavithra would be flying passenger aircraft for the Air Force.

“The only thing I trust when I’m up in the air is myself,” said Pavithra. “If one has ambition, one should trust oneself and work towards that

The SLAF is currently analyzing the performance of Rangana and Pavithra and more women would be recruited based on that. Two other women in a junior batch are currently undergoing training and are soon expected to be commissioned as pilots.