A Bridge to Help Reptiles Cross a Busy Forest Road

The crossing in India’s Uttarakhand state is a 90-foot-long structure of bamboo, jute, and grass.
By Ojaswin Kathuria December 5, 2020
Facebook
Twitter
Linkedin
Email 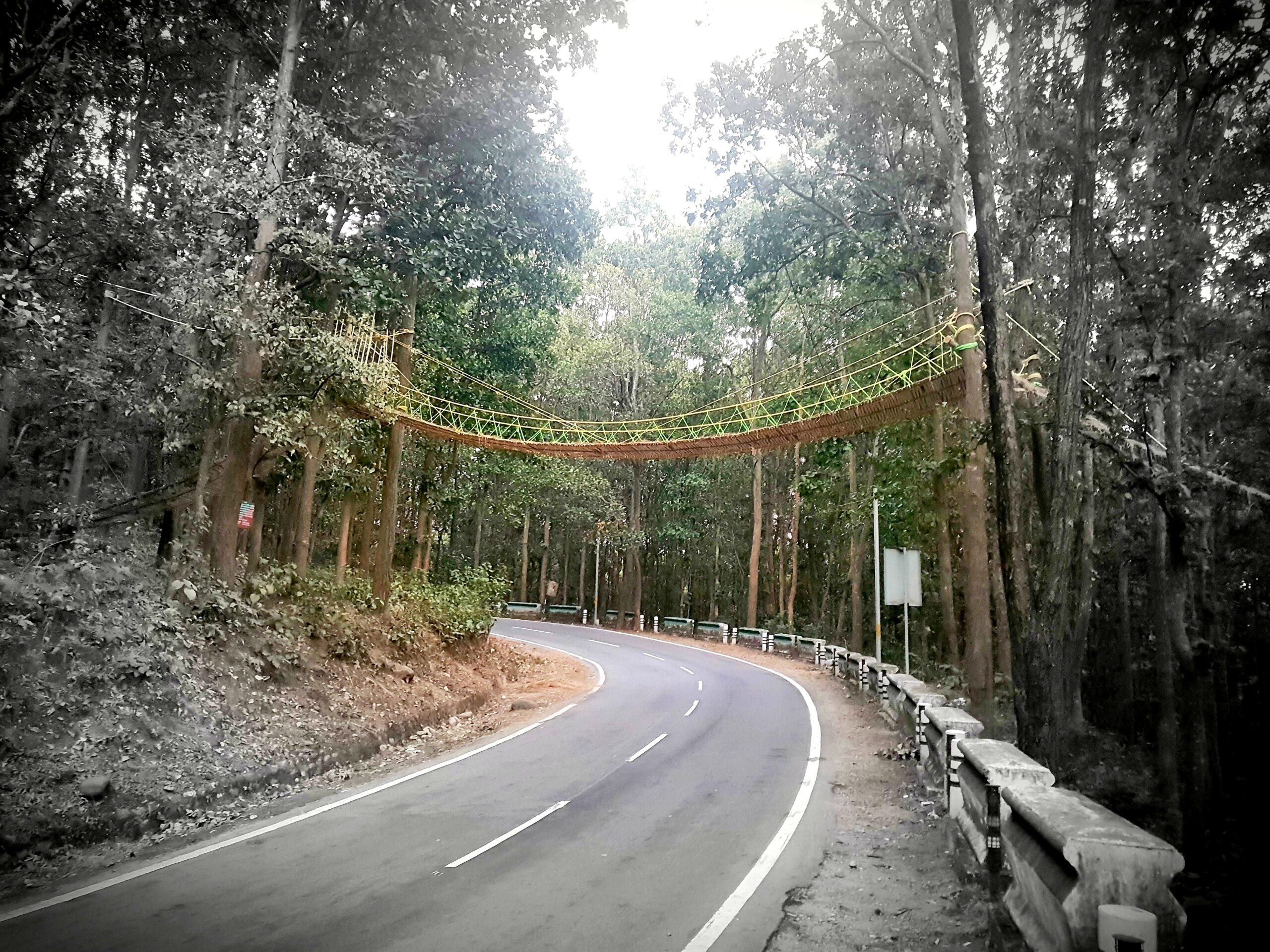 This crossing has been built to help reptiles and other animals cross a busy road through a forest. (Courtesy of Uttarakhand Forest Department)

Uttarakhand in north India is famous for its mountains and Hindu pilgrimage sites. The state is also rich in biodiversity and is home to a variety of reptiles and animals. The state’s forest department has recently built a 90-foot-long bridge made entirely of eco-friendly materials for reptiles and other animals to cross a busy forest road.

The bridge is on one of the busiest roads in the state’s Nainital district. The road gets crowded more than usual during the tourist season, which leads to animals being run over by cars.

The surrounding jungle is home to many animals such as to monitor lizards, snakes like pythons, rodent squirrels, and monkeys. The drivers stop whenever they spot big animals but the reptiles are often crushed and their remains are found on the highway.

Divisional Forest Officer (DFO) Chandra Shekhar Joshi says that since reptiles are small they do not fall in the view range of the drivers crossing the road and are often killed.

“We only focus on saving the big animals but these reptiles are equally important for our eco-system,” says Joshi. “We wanted to provide an alternative for animals and most reptiles to cross the busy road.”

Joshi mentions that the entire bridge is made wholly of jute, bamboo and grass, which merges with the surrounding forest.

Joshi said that the bridge has been made at a place where the road widens into a sudden U turn and vehicles going downhill are often running at a high speed. It is hoped that by reducing the need for sudden braking in front of a crossing animal, the road will be safer for human beings too.

Man-made animal crossings are a fairly new phenomenon in the country. Abhishek Dubey, an animal rights activist and organizer of the Animal Save Movement in India points out that the idea of man-made bridges for animals comes from Europe and America.

“In the past we have seen other countries adopt these methods to save wildlife from traffic but it will be interesting to see how animals react or get used to them” says Dubey who thinks it would take years of study to find out how animals in the district are adapting to it.

In the United States there are 21 threatened and endangered species whose survival is threatened by road mortalities. Studies conducted on wildlife roadkill accidents in Florida, Australia and Mexico show that installation of wildlife crossings save money and lives, both human and animal.

“The bridge doesn’t add any concrete structure in the forest so it would help animals take the path naturally while crossing the roads. The entire structure is natural and it fits in the surrounding jungle,” says Dubey.

To attract reptiles and animals to use the bridge creepers will be grown around it and it will be layered with grass and leaves.

The district forest department has also installed wildlife warning signs and boards on the roads to alert the drivers of the wildlife in the area.

“We hope that people driving down the roads would read the signs and drive cautiously keeping in mind the safety of the animals,” says Joshi.

Joshi adds that the forest department would regularly take care of the bridge and it’s maintenance. He mentions that the bridge is strictly for animals and he hopes to keep the visitors out of the area so that animals would adapt to the bridge naturally.

The state is home to 69 varieties of reptiles, which play an important role in balancing the ecosystem. These reptiles consume rodents and insects, which helps control the number of agricultural pests. Wildlife roadkill accidents are a big threat to the biodiversity of the state.

However, Akhilesh Chipli, General Secretary at SWAN & Man from Karnataka says that installing man-made wildlife crossings in India might not work just because it has been successful in other countries.

“Our country has a big population. Countries like the US have less population and a bigger geographical area, which keeps the wildlife away from human interference,” says Chipli.

Chipli believes that because of regular human interference, the wildlife in the area would not be able to adapt naturally to the installed bridge. He adds that wildlife cannot be trained to use a particular route.

“If left alone over a period of time they may become acquainted to the new path, but we can’t say that for sure,” says Chilpli.