Despite his advanced age, Williams was neither retired nor retiring. He taught his last class less than 12 hours before his death. 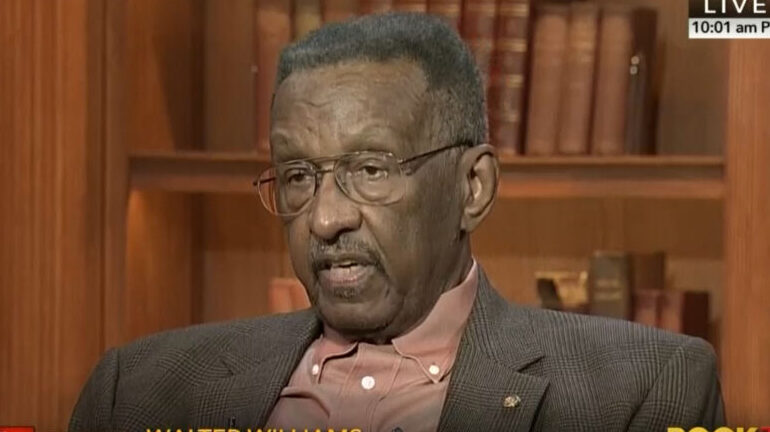 Walter E. Williams spoke on C-SPAN about the Black Lives Matter movement and other topics on Nov. 1, 2015. The African American economist died on Dec. 2, 2020. (Screen grab/C-SPAN)

Considered by his admirers to be a voice of economic rationality, he was among the few prominent African American economists who pushed back against the grain of politics, including welfare, the minimum wage and even tax policy that redistributes money from the so-called 1 percent to the poor.

Despite his advanced age, Williams was neither retired nor retiring. He enjoyed teaching, and he loved stimulating people to think differently.

Williams grew up in Philadelphia’s hardscrabble public housing projects. He worked as a taxi driver before being drafted into the army, worked as a probation officer, and put himself through college, earning a Ph.D. at UCLA in 1972.

While serving in the army in Korea, he registered with his new unit as a “Caucasian,” explaining that he didn’t mark “Black” because he didn’t want to be assigned to all the worst jobs on base. In 1963, when he was still in Korea, Williams wrote to President John Kennedy to ask whether “Negroes” should “be relieved of their service obligation or continue defending and dying for empty promises of freedom and equality,” in reference to racism in the military and the government.

Prior to being transferred to Korea, he was court-martialed  — and acquitted — for stirring up the ranks with provocative statements about race.

After teaching from 1973 to 1980 at Temple University in Philadelphia, Williams moved to George Mason University in Fairfax, Virginia. He was known for challenging his students and audiences to think critically and question widely held assumptions about the impact of government interventions on behalf of the poor, especially minimum wage laws and their impact on minorities. He argued that the effect of the minimum wage, regardless of the intentions behind it, is “to cut off the bottom rungs of the economic ladder for the most disadvantaged worker and lower the cost of discrimination.”

In a 1977 study for the Joint Economic Committee of Congress, he demonstrated that the rise of minimum wage laws ran in parallel with dramatic increases in youth and black unemployment rates, which were higher in 1970 than in 1940.

“No matter what answer we give to explain this trend, the one that we cannot give is one that asserts that society in general has become more racially discriminatory over this period,” he said. Williams returned to that theme in a 2011 study published by Stanford University’s Hoover Institution Press, “Race and Economics: How Much Can Be Blamed on Discrimination?”

“Free-market resource allocation, as opposed to allocation on political grounds, is in the interests of minorities and/or less-preferred individuals,” Williams wrote.

In his 1982 book “The State Against Blacks,” Williams cited historical evidence showing that many state interventions were in fact racist, crafted to harm black workers who were in competition with whites. The Davis-Bacon Act of 1931, which mandated “prevailing wages” for public works projects, excluded black workers from competing with whites. That was the point, Williams argued.

Democratic Rep. John J. Cochran of Missouri noted in congressional debate at the time that he had “received numerous complaints in recent months about Southern contractors employing low-paid colored mechanics getting work and bringing the employees from the South.” The law was passed with the explicit intention of excluding “colored workers.” Williams was among only a handful of public intellectuals to publicly revisit the Davis-Bacon Act .

Williams was critical of government overreach across the board and opposed socialism, redistributive taxation, the war on drugs and military conscription. He was a self-described libertarian, and his autobiography, “Up From the Projects,” recounts his “many achievements that would have been unfathomable by his ancestors, underscoring his belief that, unlike so many other societies around the world, in America one needn’t start out at, or anywhere near, the top in order to eventually reach it,” the book’s back cover states.

His legacy includes the thousands of students whom he taught over a 53-year academic career. Many became economists themselves, guaranteeing that hard questions, logic and evidence will continue to be uncomfortable, but still respected.

Williams was predeceased by his wife of 47 years, Connie Taylor Williams.