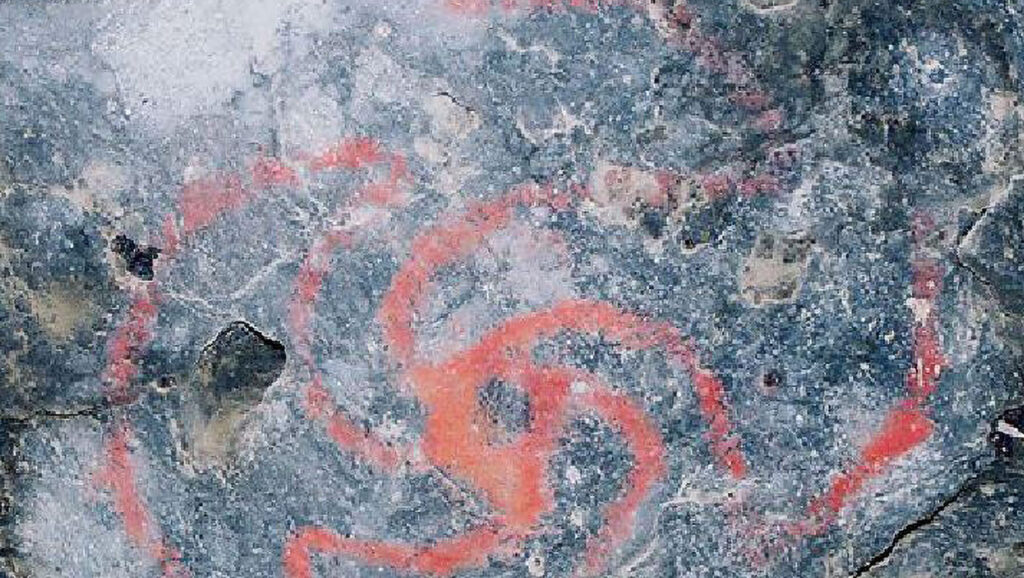 PINWHEEL CAVE, California — Ancient teenagers in what is now California ingested a hallucinogenic plant to help them “contact a supernatural plane” and “acquire power animals,” according to a new study.

The discovery of a ceiling painting, believed to be of a Datura flower, and the subsequent research conducted at Pinwheel Cave, California, is the “first clear evidence” that hallucinogens were taken at a rock art site, said Dr. David Robinson, a lecturer in archeology at the University of Central Lancashire.

His teams’ findings were published Nov. 23 in PNAS, the academic journal Proceedings of the National Academy of Sciences of the United States.

Pinwheel Cave is a traditional site of the Chumash, a Native American people that inhabited the coastal regions in California. They would enter a trance-like state, thanks to the entheogens contained in the plant Datura. Their descendants are the Tejon tribe of California.

Many cultures use Datura as a sacred visionary plant; they have been used for at least 3,000 years in the Southwest, per archeological evidence.

Entheogens are defined as psychoactive substances that cause changes in people’s sense of perception, consciousness and behavior to further spiritual elevation in a sacred context. They are typically used in ritual ceremonies. Well-known entheogens include ayahuasca and peyote.

“The primary way of taking Datura was in an event called the Toloache ceremony, a coming-of-age ceremony for adolescents, usually boys but sometimes girls,” said Robinson. “The hallucinogenic brew helped participants commune with the dead.

“What they would do is they would sequester the initiates, around puberty, and they would prepare a drink called the Toloache. An elder who had experience doing this would go find the plant, and often talk to it and ask for permission to use the plant. Precise amounts were used because of the toxic and potentially fatal nature of the substance.”

The whole point of the ceremony, Robinson said, was to induce this entry into and encounter with the supernatural in order for the initiates to acquire power animals. Anthropologists call them ‘familiars.’ Different groups call them different things, but basically the central idea in California was that you tried to get allies in the supernatural who would then be your advocates and helpers throughout the rest of your life,” said Robinson.

The study supports the altered states of consciousness (ASC) theory, proponents of which argue that hallucinogens have influenced the prehistoric making of images in caves and rock shelters.

“Debates have raged over the relationship between trance and rock art,” but until now there had been no “unambiguous evidence of the consumption of hallucinogens” from anywhere in the world, the study claims.

“Even though Native Californians are historically documented to have used Datura to enter trance states, little evidence exists to associate it with rock art,” the study said. So the authors undertook a multi-analytical approach of the contents of the cave and have confirmed the presence of the plant Datura wrightii, which is also known as “sacred datura.”

The study says that “archeological evidence and chronological dating shows the site was well utilized as a temporary residence for a range of activities from Late Prehistory through Colonial Periods.

“This indicates that Datura was ingested in the cave and that the rock painting represents the plant itself, serving to codify communal rituals involving this powerful entheogen. These results confirm the use of hallucinogens at a rock art site while calling into question previous assumptions concerning trance and rock art imagery,” the study said.

Speaking about whether the pinwheel rock art image was something that people saw and drew during the trance or whether it was something that was created afterwards, as a sort of symbolic reminder, Robinson said: “The thing this research shows and the thing that all this rock art indicates, within sites where people producing food and spending a significant amount of time, is that there is a communication process going on between the artist and the community.

“That’s the important part. That’s when it becomes far more important to me than a shaman going off and sequestering himself and then experiencing something and nobody ever sees that rock art. It’s about telling society about this process of mystification. It’s talking about the mystical in the group — so they can understand their world and understand the things they are going through, in particular with the Datura at Pinwheel Cave. The art there is about educating them about what their world is all about.”

In traditional Chumash narratives, there is a figure called “old woman Momoy” who transformed into the plant Datura after her daughter was eaten by a coyote. Datura is used in modern medicine, Robinson said, most notably for its compound scopolamine, which is used in healing. It treats motion sickness, and nausea and vomiting after surgical operations, and for its compound atropine, which is used to treat lower heart rates and reduce salivation before an operation, among other uses.

The study, part of the Unravelling the Gordian Knot Project, was funded by the Arts and Humanities Research Council (AHRC). For a list of the scientists involved, click here.