Accusations are flying about who is responsible for the latest atrocity at a school in Cameroon. 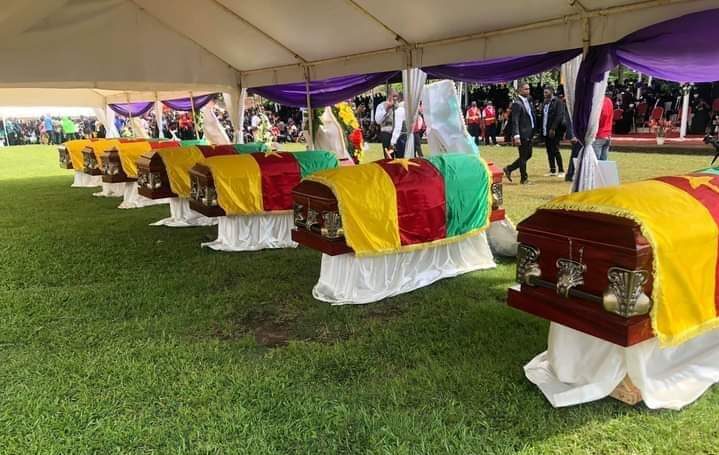 Seven children were killed, and 13 others suffered wounds when unidentified gunmen opened fire on a Cameroon school. Caskets containing the remains of 7 slain students were displayed in Kumba, Cameroon on November 5, 2020, prior to burial. (Photo courtesy: Sylvester Asong)

YAOUNDE, Cameroon — Seven children died in late October when unidentified gunmen opened fire on a Cameroon school, riddling wooden desks and benches with rifle rounds and spilling innocent blood. Thirteen more were wounded as they fled, leaving backpacks, books and their shoes behind. No one has claimed responsibility, but officials blame militants seeking to secede.

Photos from the scene have only now been released.

The Tamungwa family was expecting their son to return safely home from school on Oct. 24, but instead received news of his death.

Eleven-year-old Victory Ngamenyi was among the dead at the Mother Francisca International Bilingual Academy, a private school in Kumba, a town in Cameroon’s southwest region.

“I was in the house with my sick wife when a little girl came and started shouting, telling me they had shot and killed my son,” Boniface Tamungwa, the boy’s father, told local reporters after the shooting. “I went to the school and saw my son dead. He was among the three children who died on the spot.”

Tamungwa, a pastor, said his son had been born after nine years of infertility, and God had blessed him to become instrumental in the church.

No one has claimed responsibility for the attack, but Cameroon’s government has pointed to Anglophone, or English-speaking, armed separatists demanding independence from Francophone-dominated, or French-speaking, centralized Cameroon.

“A group of over 10 terrorists, armed with war weapons, and dressed-up in real-commando style, aboard three motorcycles, stormed the premises (of the school) and unfeelingly opened fire on the students that were in classrooms,” Rene Emmanuel Sadi, the country’s communication minister, said in a press statement at the time.

“This gruesome act was perpetrated by an armed separatist terrorist group. Special units of Cameroonian Armed Forces have undertaken to secure the town of Kumba,” he said.

But the Ambazonia Governing Council, one of the groups fighting for the independence of the unrecognized Federal Republic of Ambazonia, dismissed the accusation, saying it “is aware of Cameroon’s atrocious attempt to sabotage the smooth running of community schools using the new curriculum designed by the Ambazonia Education Board.”

The sociopolitical crisis that began in October 2016 in the Anglophone Northwest and Southwest regions of Cameroon quickly morphed into an armed conflict following the government’s lethal response to mostly peaceful protests by Anglophone lawyers and teachers who were demanding reforms in the country’s educational and judicial systems.

The conflict has since killed more than 3,000 people and displaced more than 700,000 others. About 800,000 children have been kept out of school, according to Amnesty International. Both government forces and separatist fighters have repeatedly been accused of masterminding various forms of atrocities in the conflict.

There are still fears the incident will douse the enthusiasm for effective school resumption in troubled regions.

The attack was “a disturbing reminder of the heavy toll paid by civilians, including children, many of whom have been deprived of their right to education,” said Stéphane Dujarric, a spokesman for United Nations Secretary-General António Guterres.

UNICEF Executive Director Henrietta Fore echoed those sentiments, stating, “Attacks on education are a grave violation of children’s rights. Schools must be places of safety and learning, not deathtraps.”

The massacre also received widespread condemnation in Cameroon, where social media was quickly awash with the hashtag #EndAnglophoneCrisis.

For the aggrieved parents, it is personally traumatizing.

“I went through a lot before conceiving Victory,” said Ngamenyi’s mother, Camarita Tamungwa, who said she was considered “barren” after years of infertility. “God finally blessed me with Victory and his sister. But now  It is very painful. We loved him so much.”

In an interview, her husband told Zenger News that two days before the shooting, God had revealed to him that something like it would happen. But he didn’t know it would take his son.

“Victory’s death is a great loss not only to me and my family, but to the body of Christ. This is a child who used to play the drums during church service in my ministry,” Boniface Tamungwa said. “The killers of my son should remember that no one will live here on earth forever. They will face the consequences of their actions. The act they have done to end the life of my son will affect their generations.”

The seven students killed are the latest victims of a little-known but long-running conflict in the middle-class Central African nation led by 87-year-old President Paul Biya since 1982. A drumbeat of similarly gruesome killings has become the ugly face of what’s known as “the Anglophone conflict.”

In August, a 33-year-old mother of two was killed by suspected separatists who accused her of colluding with the Cameroon military.

In April, Cameroon acknowledged the Army’s role in killing at least 13 civilians after initially denying responsibility.

Academics blame the government for not organizing negotiations between warring sides.

“Government should grant amnesty to all those arrested in relation to the crisis, including the leaders of Anglophone armed groups, so genuine talks, with the facilitation of a trusted mediation could start,” said William Hermann Arrey, chair of the Department of Peace and Development Studies at the Protestant University of Central Africa.

“This conflict can be brought to a definitive end by suspending all military operations and ceasing the targeting of civilians by both state security forces and separatist groups. The Anglophone non-state armed groups should participate with goodwill in the genuine dialogue should government launch it,” Arrey said in an email.

The conflicts stem from Cameroon’s past, first as a German colony that was later split between France and Britain. French Cameroon gained independence in 1960, joined by English-speaking Cameroonians through a federation a year later after a vote by the United Nations.

In 1972, both the English- and French-speaking parts of Cameroon became one country, rather than being governed separately. Many in Cameroon say the purpose of the conflict — restoring Cameroon’s former federal structure —is doomed to fail.

“The conflict has gone out of control. Nobody foresaw that there will be burning of villages, killing of people; that people will be arrested and massively put in jail; that some will go on exile,” said Nkongho Felix Agbor, president of the Centre for Human Rights and Democracy in Africa and one of the lawyers who initiated peaceful protests that later escalated to violence.

“There is a need for both parties in the conflict to think more about the people and try to find a long-lasting solution that will be a win-win for everybody,” he said. “We are gone beyond the blame game. We should now collectively look for the end of the day. Everybody is suffering … the country is bleeding.”

(Edited by Matthew B Hall and Natalie Gross)