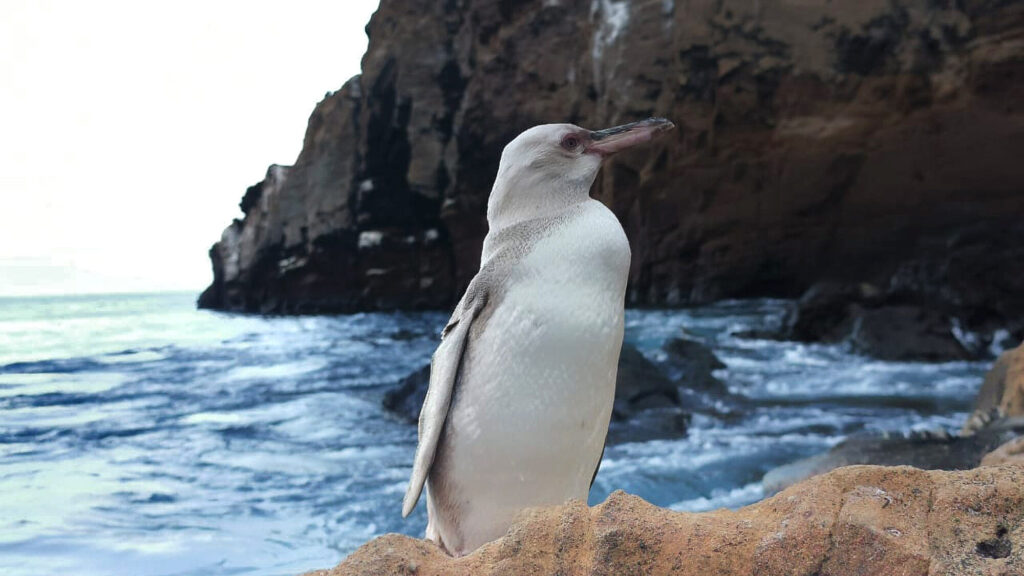 The rare penguin was shot by Jimmy Patino at the Punta Vicente Roca site, located on Isabela Island in the Galapagos Islands, on Nov. 19.

A province of Ecuador, the Galapagos is 621 miles from the South American coast. It is famous for its role in scientific history: Charles Darwin visited the Islands in 1835, and his study of its animals later inspiring the theory of evolution.

The video and footage show the penguin, believed to have a rare genetic condition that causes white plumage, calmly standing next to a large lizard. The bird is thought to be a Galapagos penguin (Spheniscus mendiculus), which is endemic to the archipelago. It’s the only penguin found above the Equator.

It is the first time such an animal has been seen in the history of the archipelago, a spokesperson from the Galapagos National Park said.

“Experts believe this is a genetic condition known as leucism, which produces a partial loss of pigmentation in the plumage, while maintaining its normal eye color which differentiates them from albinos,” the spokesperson said.

However, experts are awaiting testing results before issuing a confirmation.

The Galapagos National Park issued a statement about the population of Galapagos penguins last month.

“The data from the last census of penguins and flightless cormorant (Phalacrocorax harrisi) show record numbers, proving a good state of their population. Let’s celebrate this great news, reaffirming that the actions carried out by park rangers and scientists on the Islands are yielding positive results,” said Paulo Proaño, Minister of Environment and Water.

Reduced human activity, due to the global COVID-19 pandemic, is also seen as a factor in the penguins’ increased numbers.

The Galapagos penguins are listed as endangered and the flightless cormorant as vulnerable by the International Union for Conservation of Nature (IUCN)’s Red List of Threatened Species.