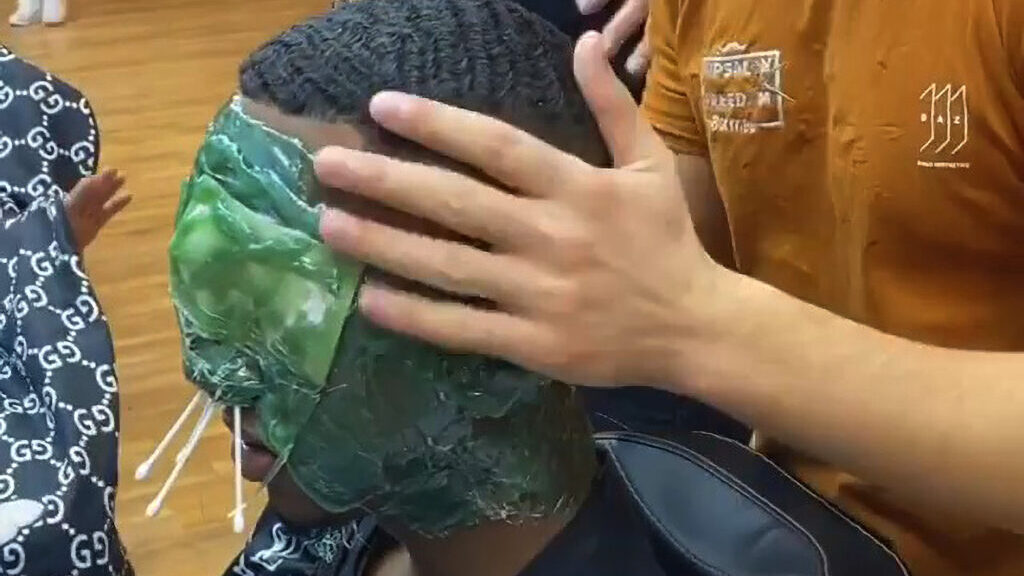 Ismael warns clients the process can be painful. But the result is a “clean and soft face, it also makes it look very fresh.”(@kapsalonfreedomboxmeer/Newsflash)

BOXMEER, Netherlands — A former Syrian refugee has found a new home and personal fulfillment in the Netherlands.

To honor his adopted country, Renaz Ismael named his barber shop Freedom. And there, in the town of Boxmeer, he specializes in the all-face wax shave.

The treatment removes hair from the client’s face and neck. In just three months, thanks to a recent video demonstration gone viral, his business is booming — despite the pandemic.

While conventional shaving gets rid of facial hair, it grows back quickly. Waxing uproots the hair shaft, which lasts longer and results in smoother skin. Waxing can last a few weeks, versus a few days of ordinary shaving.

However, Ismael warns clients the process can be painful. But the result is a “clean and soft face, it also makes it look very fresh.”

Ismael, who fled to the Netherlands five years ago, speaks excellent Dutch and has become a hit on social media for his novel service.

“For Dutch people, it often takes some getting used to having resin sticks pushed into their nose and ears, which is later whipped off quickly, removing excess hair,” he said.

Ismael has been a barber for 10 years. “I was a sickly child. That is why I never went to school in Syria. When I was 15 and started to get better, I ended up studying alongside toddlers. That didn’t work, so I started making money by cutting hair.”

Ismael learned to read and write in the Netherlands and intends to stay.

“That is why my barbershop is called Freedom. Freedom is something very valuable I found here,” he said.

The Netherlands welcomed 2,265 invited refugees in 2017, as part of the EU-Turkey statement. They are granted an asylum residence permit. However, the number of people requesting refugee status has fallen in 2020, given travel difficulties, though the majority were from Syria.