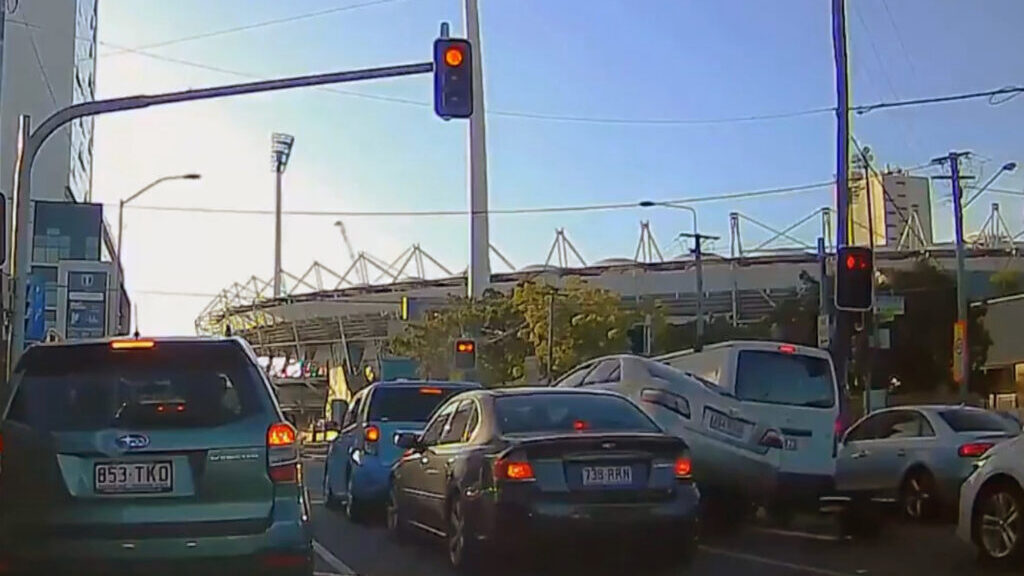 A 20-year-old swerves dangerously across lanes and rams into cars. (@QldPolice/Newsflash)

BRISBANE, Australia – A young motorist drove a suspected stolen vehicle like a bumper car on city streets before being arrested by Australian police.

The incident was filmed in Brisbane, a city of 2 million and the third-largest in the country, on Nov. 20.

The Queensland Police released the footage on Twitter with the message: “A 20-year-old man has been charged after allegedly crashing through vehicles in Brisbane yesterday afternoon. Luckily, no one was seriously injured.”

In the first video, the suspect is seen smashing into three stationary cars, while forcing his way between two rows of cars at a red light. Police saw the out-of-control vehicle and began a short pursuit.

In the second scene, the reckless driver rams other vehicles and swerves dangerously across lanes.

The driver continued traveling through Brisbane City before crashing into a truck, at which point he fled the scene on foot.

The suspect is then chased by a police officer on a motorbike, who eventually dismounts and tackles and handcuffs him.

The man is also alleged to have injured a 7-year-old girl, a passenger in one of the cars he hit. He was charged with the dangerous operation of a motor vehicle, evasion, driving without a license, willful damage and stealing. Bail was denied. He is scheduled to reappear in court on Dec. 16.