The Matuas are key to the governing party’s bid to retain its hold in the Assembly. 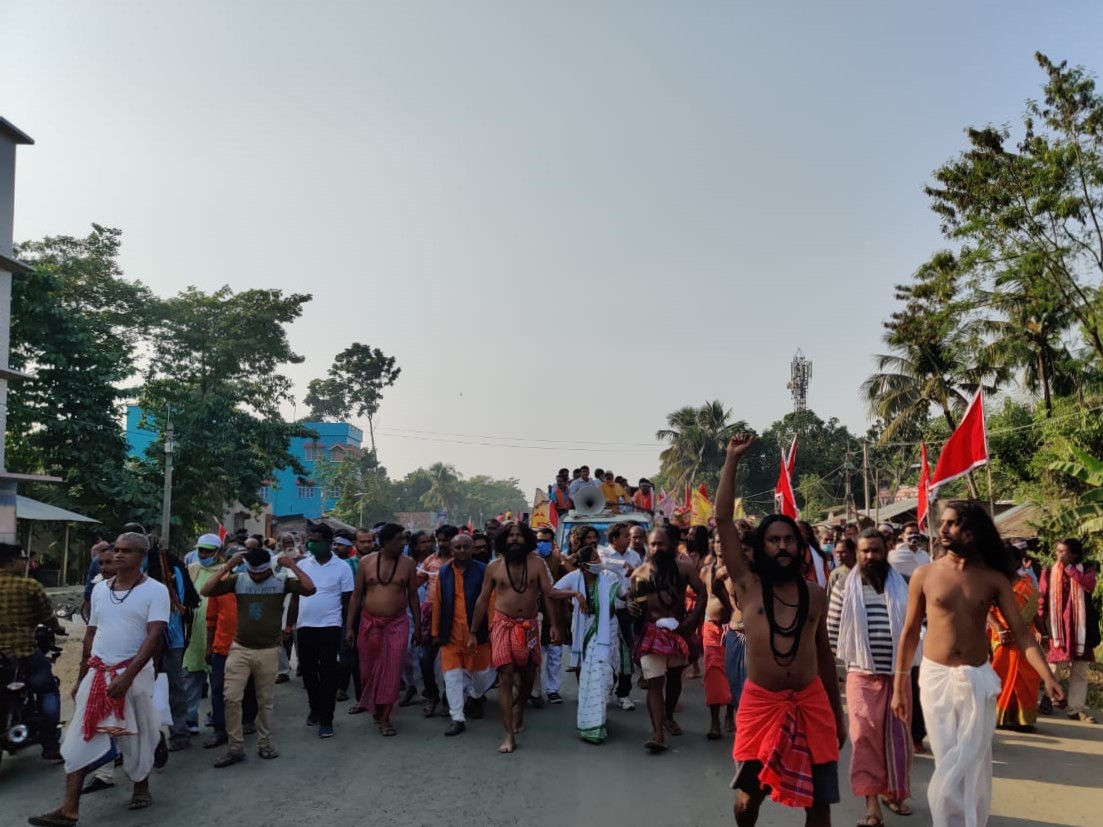 Kolkata — As India’s eastern state of West Bengal goes to the polls next year, a community of refugees, neglected for decades, is being wooed by opposing political parties.

“The Matuas have been facing discrimination in society for hundreds of years. Today they are being used by politicians to garner votes,” said Mukut Mani Adhikari, a doctor from the community.

Numbering around 30 million, the Matuas fled communal violence during the partition of Bengal in 1947 and then during the liberation war of Bangladesh in 1971. Today they mainly reside in Thakurnagar, a hamlet in West Bengal near the Bangladesh border.

Two weeks ago, Home Minister Amit Shah had lunch at the house of a Matua, as members of the community are colloquially known. They are considered “outcasts” at the bottom of India’s caste system.

The lunch sparked a controversy when Mamata Banerjee, the state’s incumbent chief minister from Trinamool Congress, a party in opposition to Shah’s Bharatiya Janata Party (BJP), said the food was prepared by a Brahmin from a five-star hotel.

Such controversies around political leaders feasting with members of a lower caste before elections in an effort to garner votes are not new in India. The tradition, started by Mahatma Gandhi, predates India’s independence in 1947.

Despite this wooing, the Matuas are not happy with the treatment meted out to them, and are aware of their role in so-called vote bank politics.

Recently, Banerjee granted land rights to nearly 25,000 refugee families, including the Matuas, and promised to give land rights to another 125,000 families.

“The government didn’t invest in educating the Matuas because once they are educated and start thinking rationally, the vote-bank would be lost,” said Adhikari.

Though the Matuas traditionally are followers of the Hindu religion, they follow Vaishnavism, one of the major forms of modern Hinduism, characterized by devotion to the god Vishnu and his incarnations (avatars).

The community is key to the BJP, which is vying to retain its hold in the 2021 Assembly elections. The state was governed by parties of the left for 34-years until 2011, when the Mamata Banerjee-led Trinamool Congress government came to power. Prime Minister Narendra Modi’s right-wing government has never held the majority in West Bengal.

The Matuas are strong supporters of the controversial Citizenship (Amendment) Act, 2019, brought forth by the Modi government. 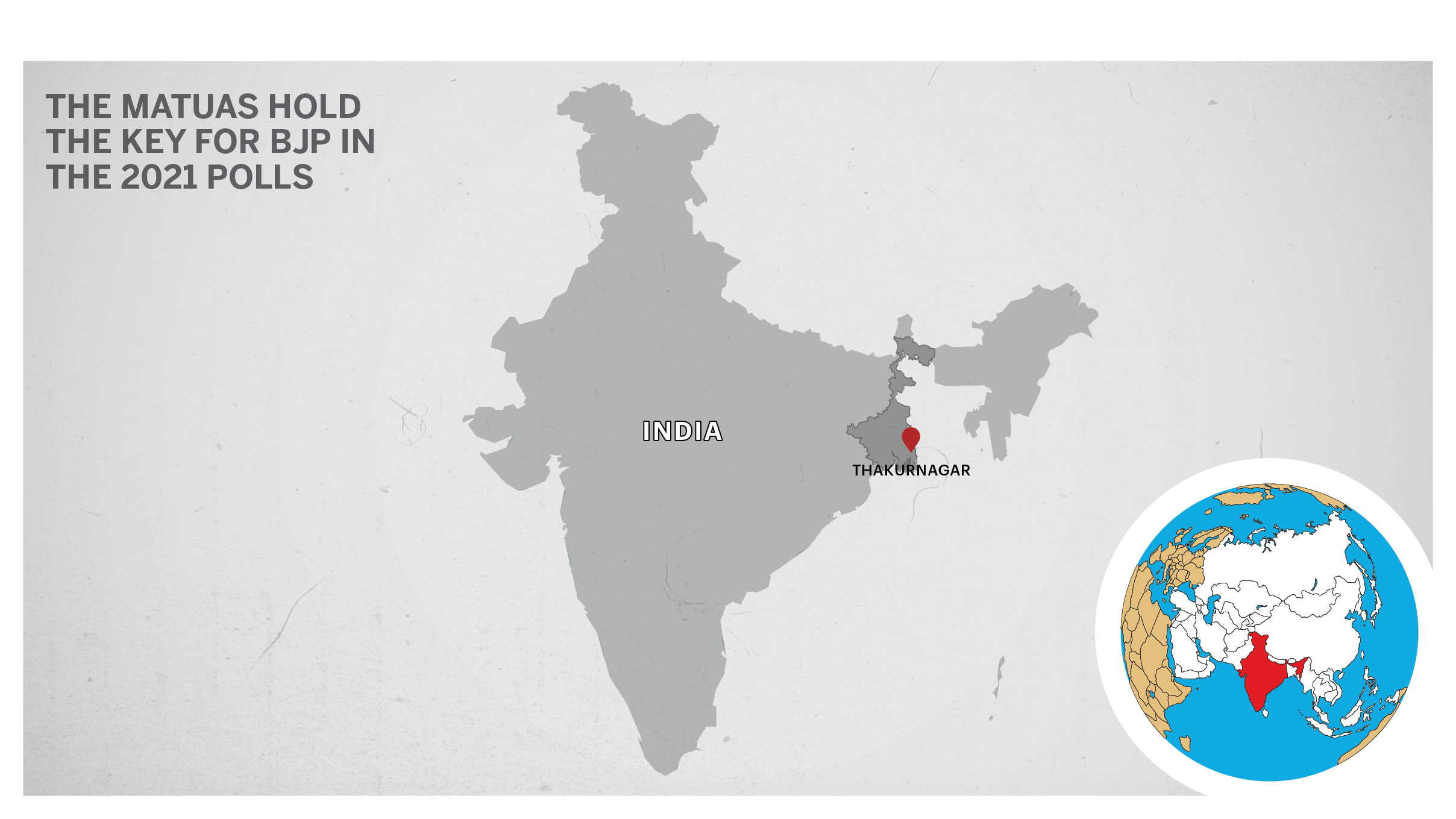 The 2019 act amends the Citizenship Act 1955 to provide Indian citizenship to illegal migrants from Afghanistan, Bangladesh and Pakistan, and are Hindus, Sikhs, Buddhists, Jains, Parsis or Christians.  It is regarded by many as anti-Muslim and unconstitutional and led to widespread protests.

However, it will provide citizenship to the Matuas, most of whom fled to India in 1971.

“Matuas faced harassment in government paperwork like getting an Aadhar card (a unique identification number given to each citizen) or a ration card. Many times, they are asked to show land ownership prior to 1971, which is a form of harassment,” said Adhikari.

At Thakurnagar, the Matuas settled under the tutelage of the family of Harichand Thakur, the revered leader of the Matua sect.

In the 19th century, Thakur formed the closely knit community of the outcastes in undivided Bengal called the Matuas. This coincided with the period of renaissance in Bengal, when reformists including Ram Mohan Roy and Ishwar Chandra Vidyasagar, protested malpractices in the Hindu religion.

In February last year, ahead of India’s parliamentary elections, Modi came to Thakurnagar to seek the blessing of the community’s matriarch, Binapani Devi, also known as Boro Maa, or the elder mother. She was the widow of Pramath Ranjan Thakur, the great-grandson of Harichand Thakur, the founder of the Matua community.

In May last year, Devi died at age 100, leaving behind a politically fractured community.

While she was close to Banerjee, who was appointed chief patron of the community in 2010, members of her family have chosen different political routes.

Contesting from the Bharatiya Janata Party, one of her grandsons, Shantanu Thakur, usurped Mamata Bala Thakur, one of her daughter-in-laws representing Trinamool Congress, from Bangaon, a city in North 24 Paraganas district of the state, in the 2019 parliamentary elections.

Such political infighting in the community is perplexing to political observers.

“I am unhappy the minority community comes to the forefront whenever there are elections,” said Amal Mukherjee, a former principal at Presidency College. “There has been little economic development of the Matua community. They did not get the dues. The Bharatiya Janata Party is encroaching on the ground prepared by the Trinamool Congress in the past. They are desperately trying to rope in the Matuas to their side.”

Employment and means for sustenance are still unresolved issues for the Matuas.

“Even today, almost 80 percent of people in the Matua community are peasants,” said Ranjit Sarkar, a leader at the Namasudra Unnayan Committee (Namasudra reformist committee). The movement, which led to the formation of the community, was an offshoot of the movement for the rights of Namasudra, a broader community of outcasts from Bengal during the British era.

“Rebelling against social marginalization and untouchability, and promising salvation through ecstatic singing and dancing, the Matua community triggered a massive mobilization in rural East Bengal. Partition and displacement have disrupted the unity of the Matua movement, now scattered on both sides of the hastily drawn Indo-Bangladesh border,” states a recent study titled “Religion, Caste, and Displacement: The Matua Community” in the Oxford Research Encyclopedia by Carola Erika Lorea.

While the Matuas will get citizenship under the amended act, the deep-rooted caste system in India is still a major hurdle for them.

“Often people from the upper castes look down upon the Matuas, and they still remain marginalized in the society. Today, the politicians want to use the Matuas for vote-bank. Hardly anyone talks about their development,” said Sarkar.