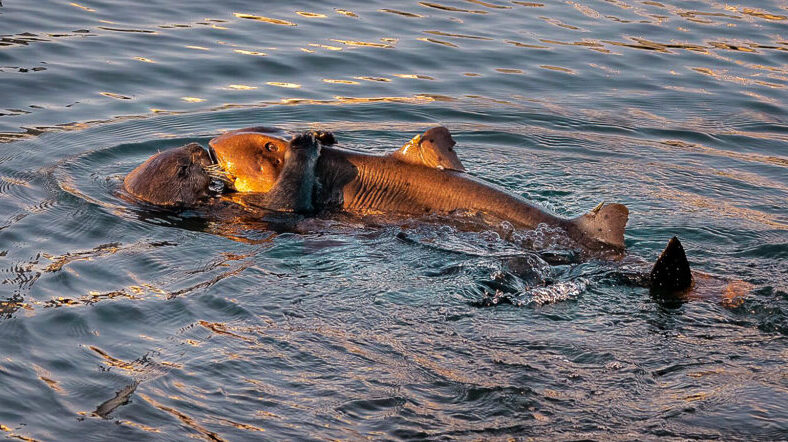 "These ‘jaw-dropping’ images are the first record of an interaction between a sea otter and a horn shark!” said Sea Otter Savvy. (Don Henderson, Sea Otter Savvy/Newsflash)

MORRO BAY, California – Talk about your role reversal: A sea otter was caught on camera apparently trying to make a meal of a much larger horn shark off the California coast.

“If you watch sea otters long enough you will see a range of sea life brought to the surface. These ‘jaw-dropping’ images are the first record of an interaction between a sea otter and a horn shark!” said Sea Otter Savvy, a group that strives to foster responsible behavior by users of the marine environment while viewing or recreating near sea otters.

The images show a sea otter (Enhydra lutris) apparently trying to nibble on a horn shark (Heterodontus francisci) but finding it tough going. Marine biologists who have seen the video say they believe the shark, which is typically a bottom dweller, was grabbed by the otter while foraging and quickly abandoned as inedible.

“While fish are not unusual prey for more northern sea otters (Alaska and Russia), they are quite uncommon in California. Not surprisingly, while some nibbling may have occurred, the prey was not consumed,” Sea Otter Savvy said in its posting.

Sea otters are the smallest marine mammal whose flipper-shaped hind feet are well adapted to a marine environment, with adult females typically weighing 35-60 pounds, while males reach up to 90 pounds.

The horn shark has a short, blunt head with high ridges above its eyes and large fin spines, including two prominent dorsal fin spines that give the species its name. They can be up to 4 feet in length, but unlike their super-fast mako cousins, are slow swimmers.