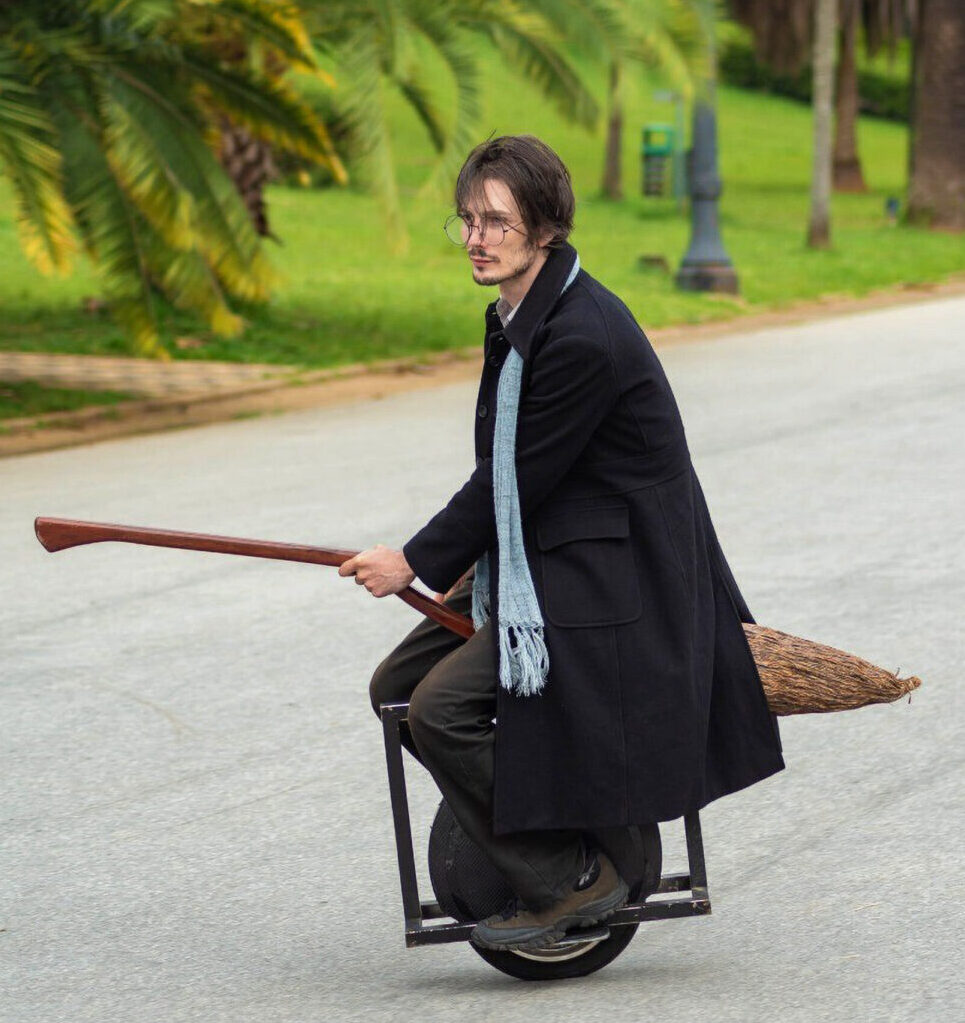 Vinicius Sanctus, 38, chief operating officer, is beyond the prototype and ready for action. (Daniel Zarahi/Newsflash)

BELO HORIZONTE, Brazil — “Potterheads” looking to play a real-life game of Quidditch may soon be able to do so on motorized broomsticks.

Vinicius Sanctus, the chief operating officer at Nuvem Vassouras, has been involved with the company since the creation of the first prototype of the unorthodox vehicles, which are the brainchild of Alessandro Russo. Russo, who is from Belo Horizonte, Brazil, developed the idea alongside his childhood friend and business partner Henrique Suarez, both being Potter fans.

Footage showing Sanctus and Russo riding the broomsticks, inspired by author J.K. Rowling’s Harry Potter novels, and weaving in and out of traffic went viral in early November. Despite the popularity of the video, Sanctus said providing a mode of transportation was not the broom’s original purpose.

“The invention was made with the aim of playing Quidditch in the closest way possible to the films and to realize Alessandro’s childhood dream,” he told Zenger News. The creation was a labor of love and was not an easy feat.

“We faced several obstacles,” he said. “We failed in a Kickstarter campaign due to not having international marketing. We even doubted the functionality of the prototype due to the learning curve and the fact that we had to discover for ourselves how to ride the broom.”

Despite the setbacks, the company managed to turn a mere idea into a nearly finished product in record time.

“Alessandro came up with the idea in January, and the first functional prototype was implemented in June or July,” Sanctus said.

When will the broomsticks hit the shelves? Sanctus said the company doesn’t have a clear timeline but hopes to begin selling the product as soon as possible.

“We are already trying to commercialize the product from the beginning, but there are several financial implications that the whole team faces at the moment,” he said. “Through investors Anjos do Brasil, partnerships and sponsorships, we hope to soon be able to market the product and bring Quidditch to life on the brooms.”

“Creating this broom has opened our eyes to how the market works and especially how media exposure works, so I don’t think we’ll stop there if the idea of Quidditch doesn’t have the desired results,” he said.

The broomsticks, which are functionally motorized unicycles, will be offered in several different models with speeds varying from 12 to 31 mph.