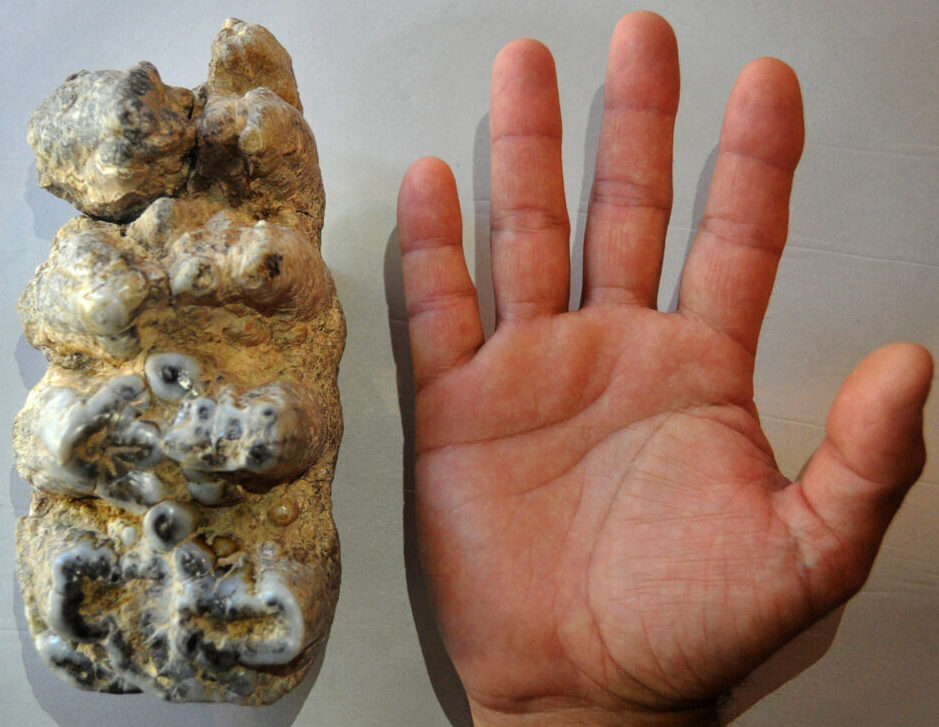 A massive molar tooth, the size of a human hand, discovered along an Argentina river, is from an ancestral elephant. Paleontologico San Pedro/Real Press)

BUENOS AIRES PROVINCE, Argentina — The massive tooth of an ancestral elephant has been found in an Argentine river during a family fishing trip.

The impressive molar was once attached to the jawbone of a stegomastodon (Stegomastodon platensis), a prehistoric ancestor of the modern elephant, which lived in the Pampas region.

It disappeared along with other species in the Quaternary period.

The tooth was found by Misael Ali, Daniela Martinez and their son, Gustavo Martinez during a trip to the Arrecifes River in the eastern province of Buenos Aires. Ali was fishing when he spotted the half-buried remains of what appeared to be a big fossil.

“The first thing he noticed was the molar, and then some other parts of the animal. But the most impressive was the molar, as it shone through the water due to the enamel,” said Jose Luis Aguilar, director of the Paleontology Museum of San Pedro.

The family called the museum and a group of experts, headed by Aguilar, Javier Saucedo, Matias Swistun and Water Parra, went to the area. They recovered parts of the pelvis and the complete scapula of the huge beast.

The museum has dated the remains to between 50,000 and 100,000 years ago, which means the animal died during the Lujanense, (South American Mammal Age), Aguilar said.

The molar weighs 3.5 lbs and is nearly 8 inches in length, similar to the size of a human hand.

“The animal’s head was enormous, as was common among mastodons. They also had big tusks for defense,” Aguilar said. This species of mastodon, an elephant-like mammal, originally came from Egypt back in the Eoceno era.

“This discovery is important because it shows for the first time these animals lived in this part of Argentina. It provides us with new details about the geographical and temporal presence of the animal in the larger area,” Aguilar said.

The mastodon lived in the open green plains. It is believed they protected each other and lived in groups, similar to modern-day elephants.

“They had few enemies, but did, we think, live alongside the Smilodon, also known as a saber-toothed tiger. But even this large predator would usually not approach them unless they were old and weak. They would also attack unprotected offspring,” he said.

This species went extinct in the Quaternary period, presumably due to extreme weather changes. The planet was first hit by an ice age some 20,000 to 30,000 years ago, followed by hot weather and entirely new types of vegetation.

“Those animals were unable to adapt themselves to the new climate and new vegetation and the food chain,” Aguilar said.

This is not the first time mastodon remains have been discovered in Argentina, but it is the first time in the Buenos Aires region. Six years ago, a man found bones assumed to be from a 10,000-year-old mastodon in San Lorenzo.

The area has garnered several other fossil finds. In March 2019, paleontologists found the remains of 700,000-year-old giant bear in San Pedro, Argentina. In May 2020, the fossil of a sloth was also discovered.