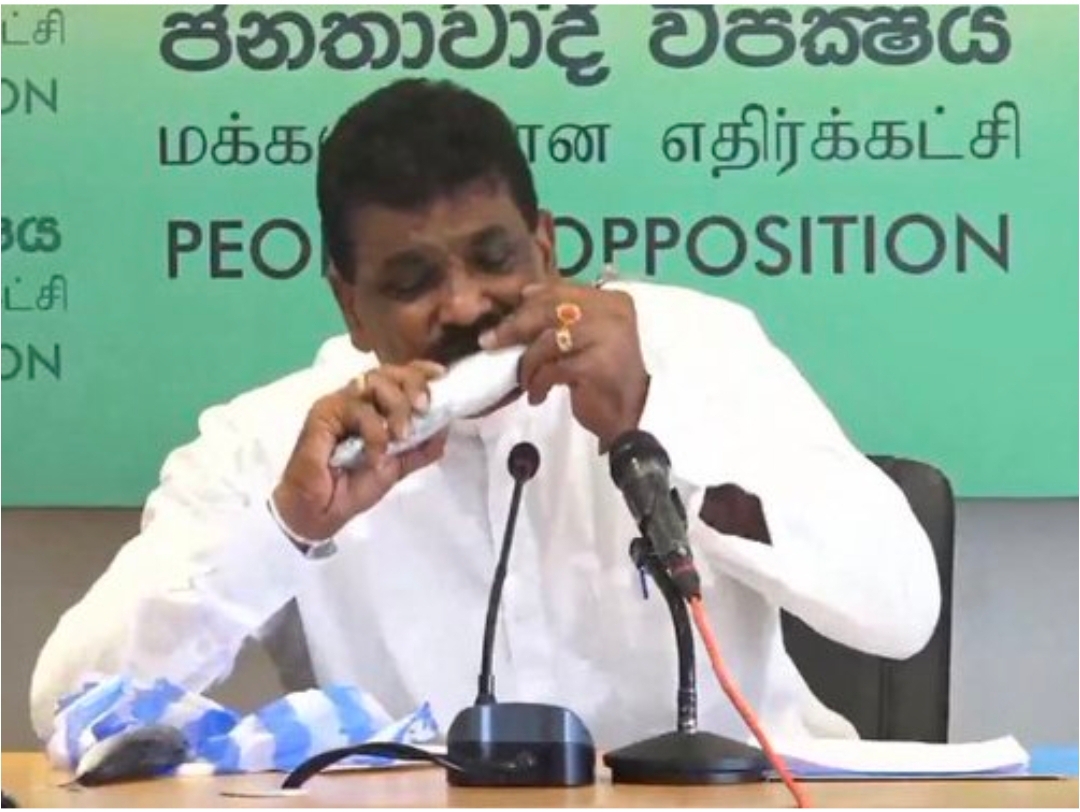 How far would you go to prove a point?

Well, the former Sri Lankan Minister of Fisheries, Dilip Wedaarachchi went the whole mile and some more when he took a bite of a raw fish to prove that Covid-19 does not spread from fish to man and is perfectly safe to eat… even uncooked!

The former minister channeled his inner Bear Grylls (the British adventurer with a penchant for raw food) at a press conference in Colombo on November 17.

“Doctors must promote the consumption of fish because Covid-19 does not spread through fish,” said Wedaarachchi.

Saying so, the ex-parliamentarian suddenly picked up a plastic bag containing fish that he claimed he had bought “fresh” from the Tangalle fishing harbor the day before. He then proceeded to take the fish out from the bag and bite into the raw fish leaving the hall of reporters surprised and disgusted.

However, the fact remains that health practitioners discourage the consumption of untreated raw fish.

The General Medical Officers’ Association (GMOA) of Sri Lanka warns that fish should be cooked before eating.

“There are plenty of bacteria and parasites present on the fish’s skin and that is why we do not recommend the consumption of raw fish. This act of the former minister could send a wrong message,” said Dr. Haritha Aluthge, GMOA editor.

The sale of fish had reduced drastically in Sri Lanka after the island had a second outbreak of COVID 19 that started in October. Of the two major clusters of positive patients, one of them came from the Central Fish Market that is responsible for the distribution of fish to Colombo and the suburbs.

The Central Fish Market is a wholesale spot where fishermen buy fish in bulk and sell it to people in parts of Colombo that cannot source fresh fish. Some fish is preserved in iceboxes and sent to the districts.

Ever since the origin of the cluster was known — people from all parts of the country have been hesitant in buying fish and have preferred other alternatives. This has led to a decrease in fish being sold, which resulted in a lack of income for those involved in fishing as their primary source of livelihood.

“There is no need to fear in eating fish. Just remember to wash your hands using soap after handling packages and not just fish. The virus spreads when an infected person coughs or sneezes on a surface. If another person touches these surfaces and then touches his eyes, nose or mouth, there is a high chance that this person could become infected,” said Dr. Sudath Samaweera, the Chief Epidemiologist of the epidemiology unit under the Ministry of Health.

“The intention of the Wedaarachchi was not bad because he was just attempting to increase the consumption of fish by demonstrating its safety to those assembled at the press conference,” said Aluthge.

This is not the first instance when there has been reduced sale of fish in Sri Lanka; demand had similarly gone down during the first outbreak of the virus in March. People in Sri Lanka had pre-conceived notions about consuming meat and fish during the pandemic as they thought that they could be infected by the virus by eating animal products.  This pattern continued until the  World Health Organization (WHO) cleared doubts regarding the matter.

While Wedaarachchi’s “fishy” stunt may have caught a lot of attention, it was not the first time that a Sri Lankan politician has been in the news for doing something out of the ordinary.

In September, Arundika Fernando, the State Minister of Coconut, Fishtail Palm, Palmyra, and Rubber Product Promotion addressed a press from the top of a coconut tree.

The event was held in his coconut groove in Dankotuwa, a town situated 29 miles (ca. 47 km) from the capital city. The State Minister had ascended a coconut tree and also picked a few coconuts while he was at it.

Addressing reporters from atop the tree, Fernando said,” the cost of coconuts has increased because of the increase in demand for coconut-related items the world over.”

In addition, the state minister also demanded that coconut-pickers must be paid $0.54 for each tree.

The minister was resolute that he would not allow the import of coconuts despite an upsurge in their pricing as those producing toddy and picking coconuts were in economic distress.

A machine to climb coconut trees was tested by the state minister who informed the media the necessary measures would be taken to introduce the machine in the months following the press meet.