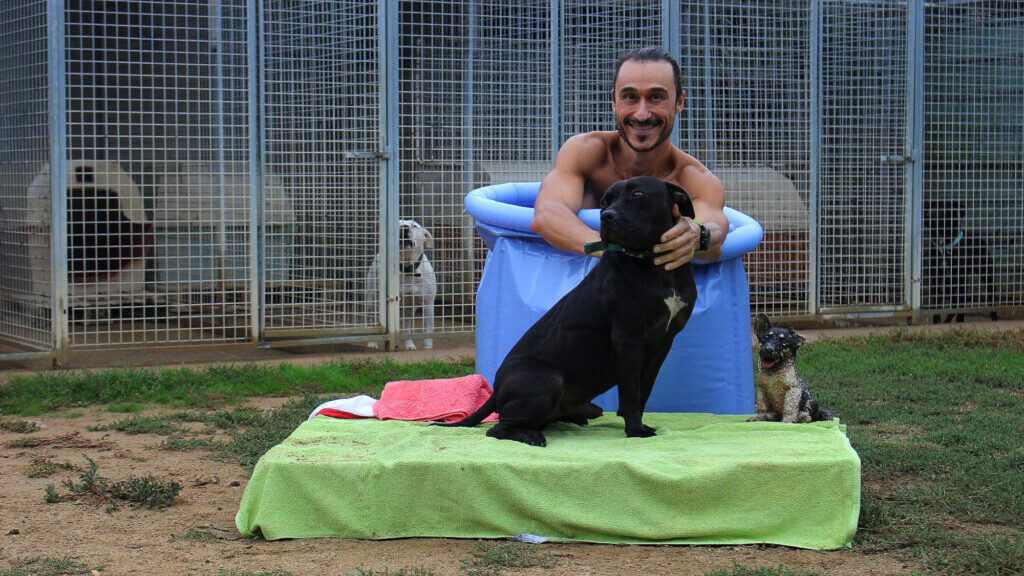 Dr. Daniel Amo, who teaches at Ramon Llull University and lives in Badalona with his wife and two daughters, has had a passion for sports and running his entire life. He told Zenger News that he has been running barefoot for a year after starting to remove protective layers from his feet four years ago as a form of physical therapy to relieve pain.

Dr. Daniel Amo has had a passion for sports and running his entire life and has been running barefoot for a year now.

When Spain’s nationwide lockdown to mitigate the spread of coronavirus was lifted, Amo paired up with the Daina Foundation, an animal shelter group that helps abandoned animals find homes and stay healthy. He began running for the organization to promote the adoption of different dogs on Saturdays in June. Documenting his efforts, he reached more than 40,000 people on social media during his weekend runs.

Amo then began looking for new ways to support the foundation and noticed that its three animal shelters were each separated by about 25 miles, roughly equaling the distance of a marathon. He then decided to run the three marathons, totaling approximately 75 miles, barefoot.

During each run, Amo faced many challenges, including severe blistering on his feet caused by asphalt. After nearly canceling the second marathon due to intense pain, he persevered and completed the third phase of the challenge on Oct. 24.

“The best moment is when I arrived and saw all the dogs because it reminds you of what cause you are fighting for,” Amo said.

One of his main goals was to help the Daina Foundation get 2,000 volunteers to commit to donating a small sum of money every month. The number currently stands at 1,423 people, almost 300 of whom joined during Amo’s three marathon runs. Despite not reaching his goal, Amo is still happy with the results. The money raised will go toward paying vets salaries, a move that will free up funds for other organization efforts.

Amo also hopes to help unite humans and the environment, which he said people have “disrespected.”

“The fact I am fighting for animals also helps me promote the message that we are dehumanizing ourselves in some ways,” he said. “We are acclimatizing ourselves to the floors of our cities instead of finding a sustainable way of working with the environment. What we are doing is destroying nature.”

Amo first became aware of barefoot running after he was given shoe insoles by doctors to help deal with post-run pain that was caused by the high arches of his feet and one of his legs being slightly longer than the other. He found the method not only helped his ailments, but also turned him into a big proponent of barefoot walking and running as a way to prevent future injuries.

Barefoot running is “the best thing in the world” and the “most natural thing for us,” according to Amo, who called wearing shoes “anti-natural.”

He is still deciding what his next challenge will be but has a few options on the table, including running approximately 373 miles around Catalonia in 2021. Amo plans to complete at least one event next year to continue spreading his message.

«Previous Post
The Sky’s the Limit: Parachutists Use Props to Enhance Experience»Next Post
As Electric Vehicles Gain Popularity, Utilities May Charge All Customers