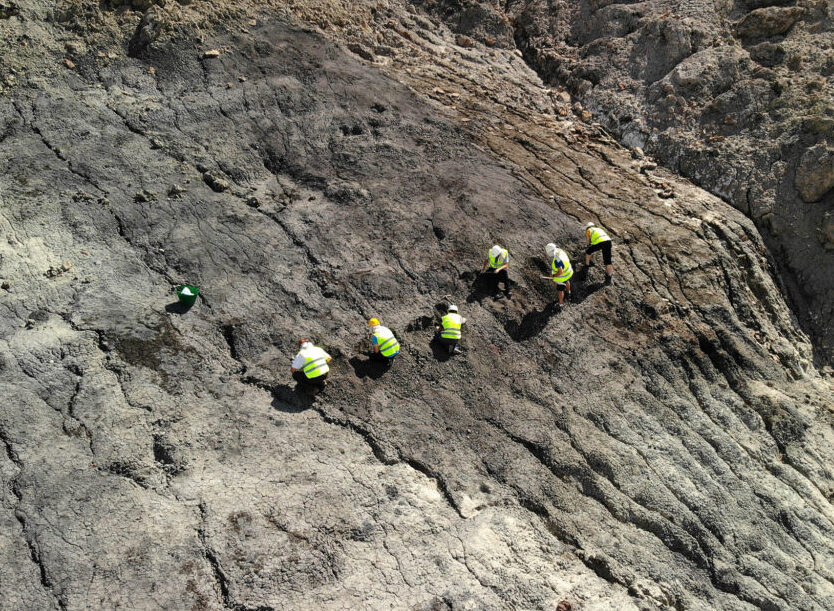 Paleontologist working in the site of Arino discover the oldest pieces of mammal hair on record and a feather of a long-extinct dinosaur in amber. (Fundacion Dinopolis/Real Press)

TERUEL, Spain – Scientists working at an archeological site in Spain have found the oldest pieces of mammal hair on record and the feather of a long-extinct dinosaur both preserved in amber.

The sets of remains were found at two different sites 25 miles (40 kilometers) apart in the province of Teruel, in the north-central Spanish region of Aragon. Both finds are believed to be between 105-110 million years old, dating to the Early Cretaceous period.

The samples were found during recent excavations of an amber mine in Santa Maria, where eggs of Proa valdearinnoensis and Europelta carbonensis dinosaurs have been discovered in the past.

“Both remains were found in very small amber pieces that had to be prepared in a lab and needed a special methodology to see what they contained,” Luis Alcala, from the Paleontology Foundation of Teruel-Dinopolis, told Zenger News. “In amber, it is easy to find insects or small invertebrates, but it is more difficult to find vertebrate animals remains like the ones found at both sites.”

The animals lived alongside the dinosaurs at around the same time coal was formed from leafy forests in the region, Alcala said.

“The pieces of amber are very small, for example, the one with the feathers is only four millimeters,” he said.

The experts recently reported the discovery in Scientific Reports magazine after years of study.

The team observed that the samples were uniquely preserved through “pull off vestiture,” in which small sections of feather or hair from a live individual got stuck after the animal came into contact with the resin and stayed long enough for that substance to harden around the fibers. That means these animals might have been resting or sleeping when the resin set, Alcala said.

Due to the small size of the remains and the lack of information about the kind of mammals and flying dinosaurs living on the Iberian Peninsula during the Early Cretaceous period, the remains cannot be linked to a specific species. However, they can be linked with a general group.

In the case of the bird-dinosaur, the feathers belong to the Enantiornithes family, the ancestors of contemporary birds, while the mammal remains belong to the Mustelidae family, which now includes badgers, weasels, ferrets, otters, minks and wolverines.

“The finds might be a new species,” Alcala said. “If we find the remains of a mammal at the same site, something that could be possible as there are hair remains, then it would certainly be a new unknown mammal.”

At the time, the animals lived by an estuary near the sea, with fresh water and forest, as the current Mediterranean Sea covered the coast of Catalonia and Valencia.

“There were also small-size dinosaurs with feathers living with the carnivorous dinosaurs, the ones we all know from the movies,” Acala said.

“Feathers are not only found on birds, but were also on terrestrial animals and were not used to fly, but to provide warmth and comfort or even to identify the animals during the mating season,” he said, adding that there were small animals with feathers so light that they ended up evolving into flying creatures.

Such flying dinosaurs had teeth instead of beaks, and were able to hunt insects and worms.

Scientists believe that the mammal the second sample came from was about the size of a mouse and would hunt at night in order to escape from predators such as snakes and reptiles, and hid in dens during the day.

Asked about the possibility of bringing the dinosaurs back using DNA from their remains, à la “Jurassic Park,” Alcala said that’s currently not possible, as such genetic material can currently only be recovered from samples up to 200,000 years old, due to degradation.

But advances in technology and/or archeological techniques could eventually change that, he says.

“Maybe there is a strange site somewhere we do not know yet with a lot of possibilities of preservation or maybe there will be a new technology in the future to get the DNA from those new discoveries, but so far it is speculation,” he said. “I would never put my efforts and investments to bring back extinct species, but I would focus on avoiding current species from becoming extinct, like whales or animals living in the Amazon.”

In addition to Alcala, the research team at the Spanish sites included Sergio Alvarez Parra and Xavier Delclos, Barcelona University; Monica M. Solorzano Kraemer, from the Senckenberg Museum of Natural History in Frankfurt am Main, Germany; and Enrique Penalver from the Geological and Mining Institute of Spain.