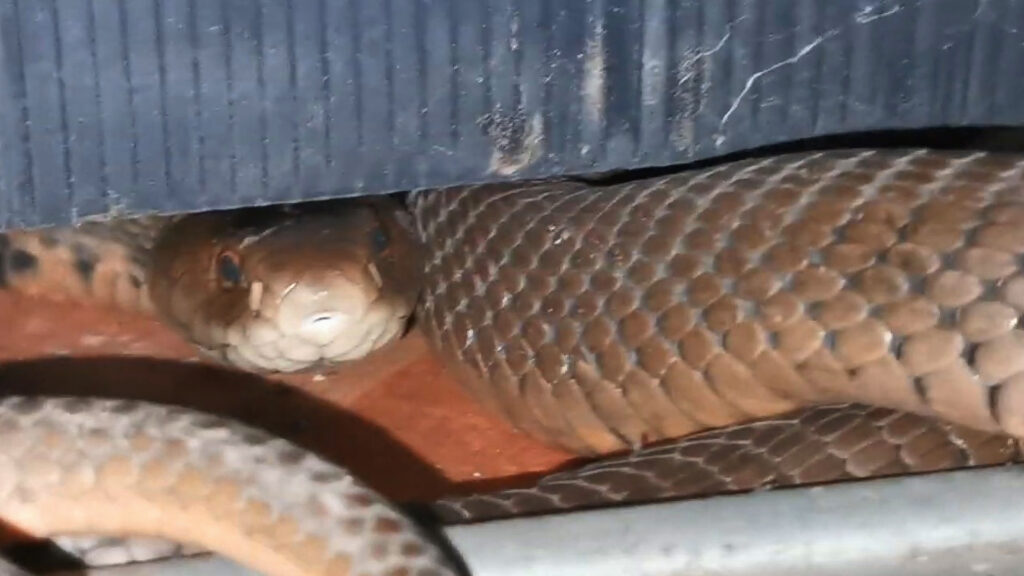 A highly venomous spitting cobra is found by South African couple in their home. (@universalreptiles/Newsflash)

DURBAN, South Africa – A South African couple awakened in the middle of the night by what they thought was the howling wind was stunned to find a highly venomous spitting cobra slithering among their bathroom toiletries.

The incident took place at a home in the city of Durban on the country’s eastern coast on Nov. 14.

Arnold said he received a call from the frightened couple after they were awoken by hissing sounds and bangs coming from their bathroom. Initially thinking it was the wind, the couple eventually got out of bed to investigate, only to discover a cobra in the bathroom.

The couple sealed the bathroom off by placing a towel at the foot of the door, but the 1.2-meter (4-foot) long cobra escaped and roamed the house while they called several snake catchers in the area.

By the time Arnold arrived, the poisonous snake was lurking under the couple’s fridge. He first used a plier-like tool to grab the snake, then seized it with his hands to remove it from under the appliance.

The snake catcher said he plans to release the cobra into the wild in the near future.

Arnold added that the Mozambique spitting cobra’s name is slightly misleading, as the species is not only found in that country, but also in Angola, Botswana, Namibia, Tanzania, Zambia and Zimbabwe.

Had the snake catcher or the couple been bitten by the snake, they would likely have experienced great pain, but probably would not die.

“The Mozambique Spitting Cobra rarely accounts for human fatalities. This is because of their slow-acting cytotoxic venom that causes pain, swelling, blistering and in some cases severe tissue damage,” according to Ingwelala, a nature reserve in northern South Africa.