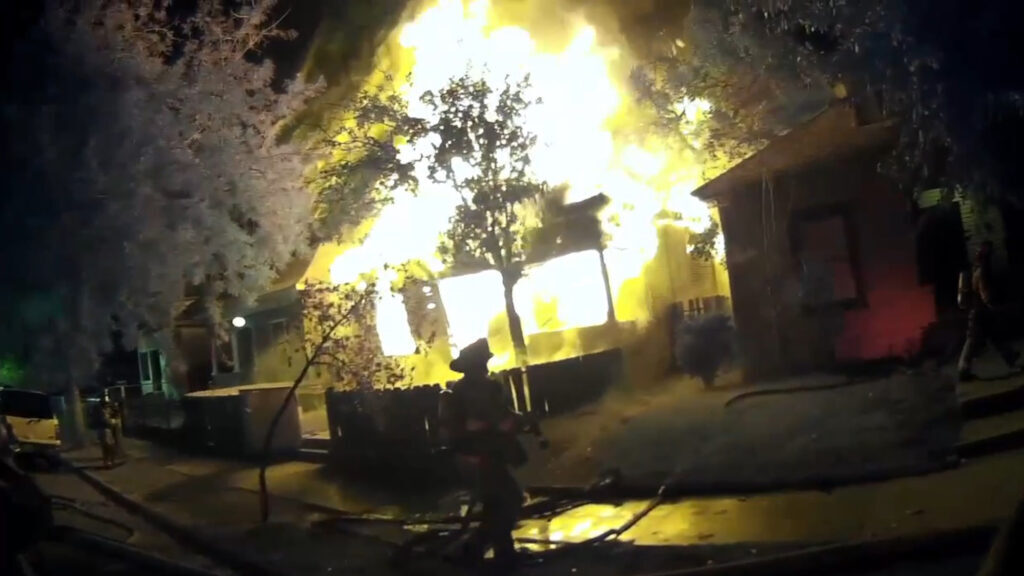 FRESNO, California—Firefighters in California minimized the damage caused by a huge blaze at an abandoned property occasionally used by homeless people.

The Fresno Fire Department responded to a report of a structure fire in the city on Nov. 14. Upon arrival, the squad found a vacant house engulfed in flames, which were spreading to neighboring homes.

Footage captured by the helmet camera of the department’s Safety Officer shows the firefighters arriving at the scene to battle the blaze. When they see the extent of the fire, they quickly leap into action to prepare the machinery and water hoses needed to tackle the flames. One firefighter can be seen aiming a hose at the fire toward the end of the video.

No one was injured in the blaze, but the department reported that a firefighter fractured his finger during the operation. Seven people in a neighboring home were displaced after their house was ignited by the spreading flames, bringing the total number of people displaced by fire in Fresno this year to 681.

“This home is the site of previous fires due to homeless activity and it is suspected that this fire was the same,” the fire department said in a Facebook post about the incident.

The Fresno Fire Department responded to 3,850 fires last year, which resulted in the displacement of 697 people. Twenty-nine civilians were injured in fires during that time period, and nine died. In addition, 97 firefighters were injured during their efforts to battle the blazes. A total of 583 fire investigations were conducted, and 40 arrests were made in connection to them.

Across the state of California, the 2020 fire season has already recorded over 9,000 fire incidents, burning nearly 4.2 million acres of land and destroying almost 10,500 structures. Additionally, 31 related fatalities have been confirmed so far.