Spence prepares for a showdown with Garcia in Dallas after a car crash that nearly ended his life. 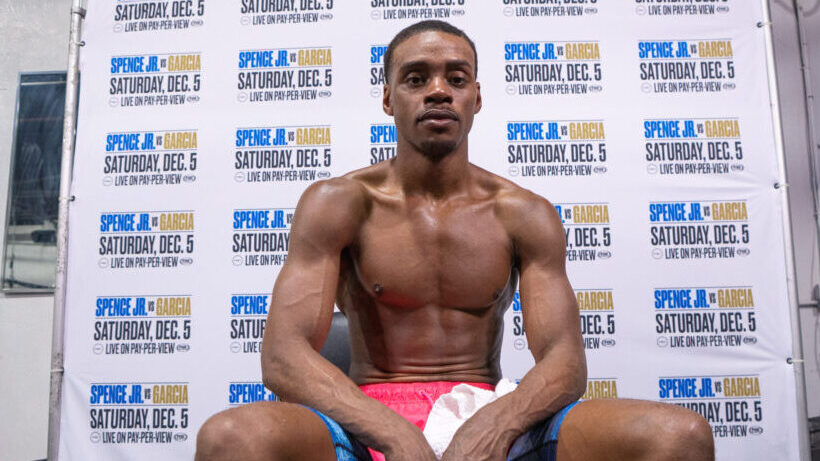 Welterweight world champion Errol Spence, Jr. prepares for a match against Danny Garcia on Dec. 5. "It wasn’t an easy comeback journey to get to where I am now. It was real hard. I put it out to remind people that you can persevere through anything. The power of the mind and staying focused, if you really want something if you put your mind to it, you can do anything and you can persevere through anything." (Ryan Hafey / Premier Boxing Champions)

He couldn’t have known he was on a path that nearly ended his life. Just a month later, photos surfaced of Spence’s demolished vehicle. One look at the condition of Spence’s Ferrari and many critics wondered if he would ever be able to fight at the same level again.

As speculation about Spence’s health circulated, more graphic footage hit the Internet revealing just what one of boxing’s pound-for-pound best had endured. Somehow he walked away with no broken bones. He came back with something to prove.

Many thought Spence’s career was over. It hasn’t been an easy road, but a little more than a year later, Spence is finally ready to defend his WBC and IBF welterweight titles on Dec. 5 against the dangerous Danny Garcia of Philadelphia.

Spence opens up about facing Garcia, the car accident, fighting in Dallas and much more.

Zenger: What’s up with you?

Spence Jr.: Nothing much, tired of doing interviews (laughing).

Zenger: They gave you country-ass livestock and acres! You are a full-fledge farmer now!

Spence Jr.: Yeah, man. Well, I’m not a farmer, I’m a ranch hand. Farmers got all types of fruits and things like that, I just got cattle. So, I’m a ranch hand. I got horses, cows, I’m going to get some chickens in here when this fight is over with and some more horses and stuff like that. I’m a real Texas boy now.

Zenger: That’s a lot of work. Do you get a hand with it, or is it mostly you right now?

Spence Jr.: Me and my dad. I have people come and put horseshoes on and stuff like that.

Zenger: Danny Garcia got into the ring after your win over Shawn Porter, and we see fighters enter the ring all the time. Sometimes those fights come to fruition, sometimes they do not. From the outside looking in, it seems this fight was fairly easy to make. Is that accurate?

Spence Jr.: It was easy to make for the most part. Danny Garcia and myself have the same advisor, so we only had to talk to one person. I feel like it was basically simple, A to B. There was no negotiation or anything.

Zenger: Where Ángel García seems to irritate other opponents and their camps, it seems like you like the fact that he believes in his son so much to make such boastful statements when discussing Danny.

Spence Jr.: I mean, that’s what he’s there for. He’s the man’s father, so it’s only right that he does believe in him. And he’s his trainer too, so it’s only right that he believes in him. I’m not irritated by him. I’ve been seeing his dad talk crazy to other people and everything, but he’s been showing me a lot of respect. I don’t have anything bad to say about him. I just think that it’s a father that believes in his son and he knows how to pump his son up. I feel like the way he be ranting and stuff like that, it’s a way to get his son ready for the fight.

Zenger: Aside from the Kell Brook fight where there seemed to be a little animosity, you always seem to share a mutual respect with your opponents. Do you have a mutual respect for Danny as a fighter and his body of work?

Zenger: I remember we spoke years ago when you first fought in Dallas and you were kind of hoping that it would become a thing. Now, you have the fanbase, the city behind and it is a thing. It’s gotta be a great feeling to have that thought manifest into what it is now?

Spence Jr.: Definitely man! Fighting at home, I just feel like a lot of fighters don’t get a chance to do that or can do that, but they don’t put butts in the seats. At the end of the day I feel like I’m able to do that and put on great performances when I do that. I’m not losing or anything like that. It’s basically shutout decisions. Last time I fought in Dallas, it was a unanimous decision, the time before that it was a knockout. The other time was a knockout too. So, every time I have fought there it has been great performances. I want to continue to do that on December 5 and if this all goes well maybe I can come back sometime soon and fight again.

Zenger: It feels like you are the chosen athlete in Dallas right now and maybe even the entire state of Texas. With so much violence in Dallas of late, do you hope your fight and your story can bring a little bit of unity to the city?

Spence Jr.: Definitely! It’s been a lot of crazy stuff happening in Dallas. Hopefully, my fight will bring people together, everyone stay safe so nothing tragic happens. I want to see everybody come together. Praying for Dallas.

Zenger: How do you view Danny as an opponent and size him up from being around him?

Spence Jr.: He’s tough. He can be rugged. He’s a guy with a great chin. I feel like he is a counterpuncher with great timing. He is a guy that will punch when you punch, or he will take a punch to give a punch. That’s basically how I size him up. He’s not quick, he’s not fast, he just does everything right.

Zenger: You eventually shared the picture of you in the hospital bed after your car accident. What made you share that picture? Was it just a matter of letting people see what you overcame, your journey leading to December 5?

Spence Jr.: For me, it was the anniversary, and I just wanted people to see my journey. How hard it was to get to the point where I am now. I just wanted people to see how hard it was. It wasn’t an easy comeback journey to get to where I am now. It was real hard. I put it out to remind people that you can persevere through anything. The power of the mind and staying focused, if you really want something if you put your mind to it, you can do anything and you can persevere through anything.

Zenger: You look to be in amazing shape, physically. How do you feel?

Spence Jr.: I feel good physically. Mentally I feel great. I’m just 100% focused. I’m just ready to put on a great performance, man. This is something I’ve been waiting for. This is my second opportunity, not only in boxing but in life. I’m not nervous at all or anything like that. If that was anybody else, probably wouldn’t be here right now or they would probably be a vegetable. For me, it’s about staying focused and getting ready for the task at hand and that’s winning in front of my hometown.

Zenger: It didn’t even seem like an option for you to take a fight against a lesser opponent to test out your mental and physical standings after the crash. Why not?

Spence Jr.: I was going to fight him [Danny Garcia] before my accident. For me, I felt 100%, I felt prepared and I felt like Danny Garcia is the type of guy, his record, who he is and his name, he was going to push me to get back to 100%. I couldn’t slack off because if I would’ve slacked off, there’s a chance that he could have beat me. So, I knew that I had to focus and have tunnel vision and make sure that I’m all the way back. If I do that, I will make this a great, entertaining but one-sided performance.

Zenger: Always great talking to you, good luck and I look forward to December 5.