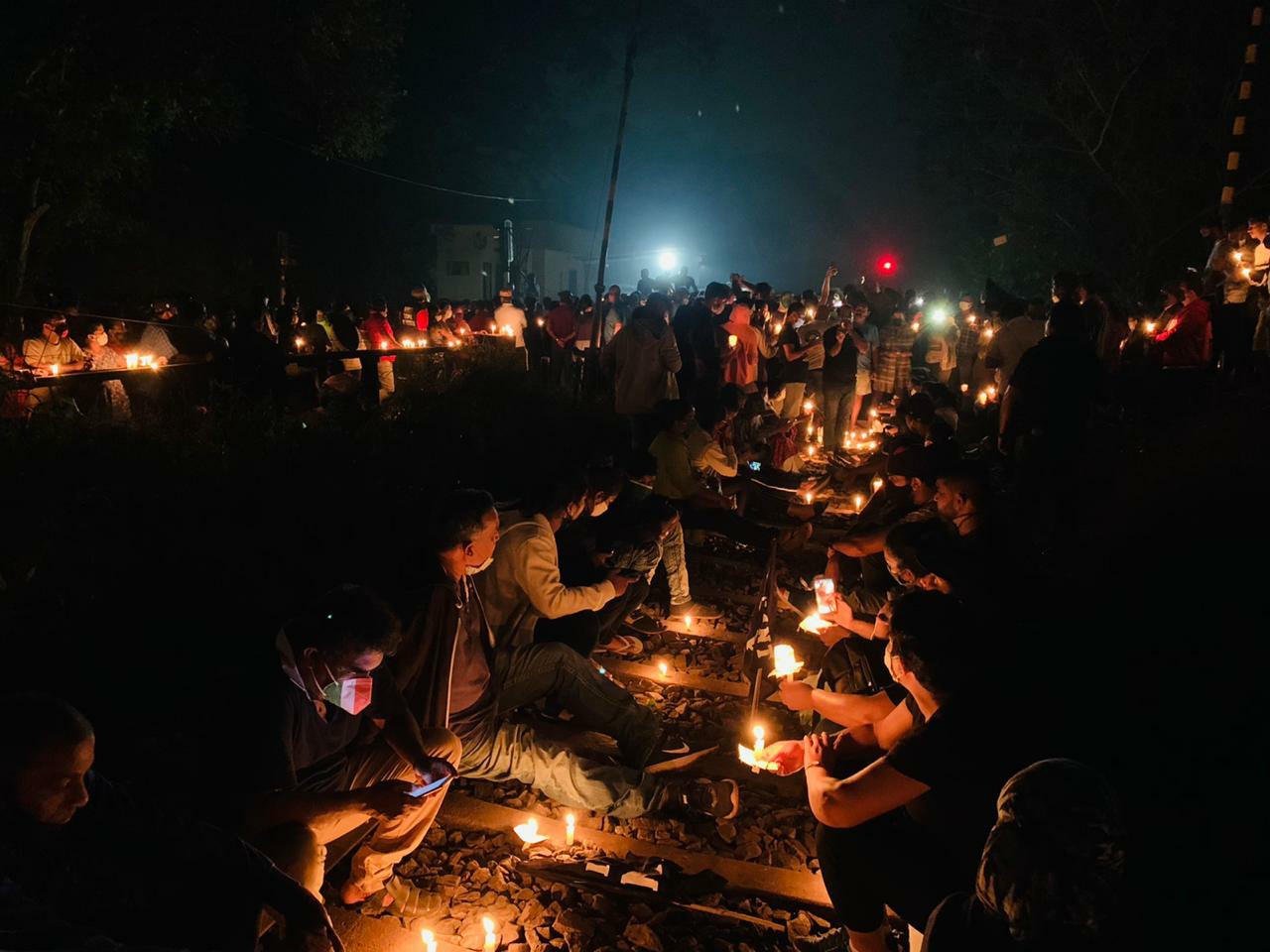 Over 3,000 protestors assembled in Chandor on November 1 to oppose the doubling of the rail lines Courtesy: Amchi Mollem

Goa — For the past six months, India’s smallest state, Goa, has become the epicenter of a nationwide movement against the country’s Environment Ministry.

Hundreds and thousands of Goans are protesting against three development projects cutting through dense forests of Bhagwan Mahaveer and Mollem national parks. Support has poured in from across India, as well as from other countries.

The three projects are the expansion of National Highway 4-A, construction of a new transmission line, and the doubling of a railway line. It is projected that around 100,000 trees in 170 hectares of forest land will fall due to these developments.

On the night of Nov. 1, nearly 3,000 people assembled in Chandor, Goa’s former capital, and blocked the rail tracks where construction work on doubling the tracks was about to take place. A police complaint has been lodged against six protesters.

Locals staged a similar protest by gathering at the crossing at Sao Jose de Areal at midnight on Oct 27.

Bhagwan Mahaveer National Park, established in Mollem in 1969, is a 92-square-mile sanctuary, encompassing Mollem National Park, which is spread over 41 square miles. These lie in the Western Ghats, a hilly range that runs along the west coast of the Indian peninsula. The Ghats, home to at least 325 threatened species, is a UNESCO World Heritage Site. 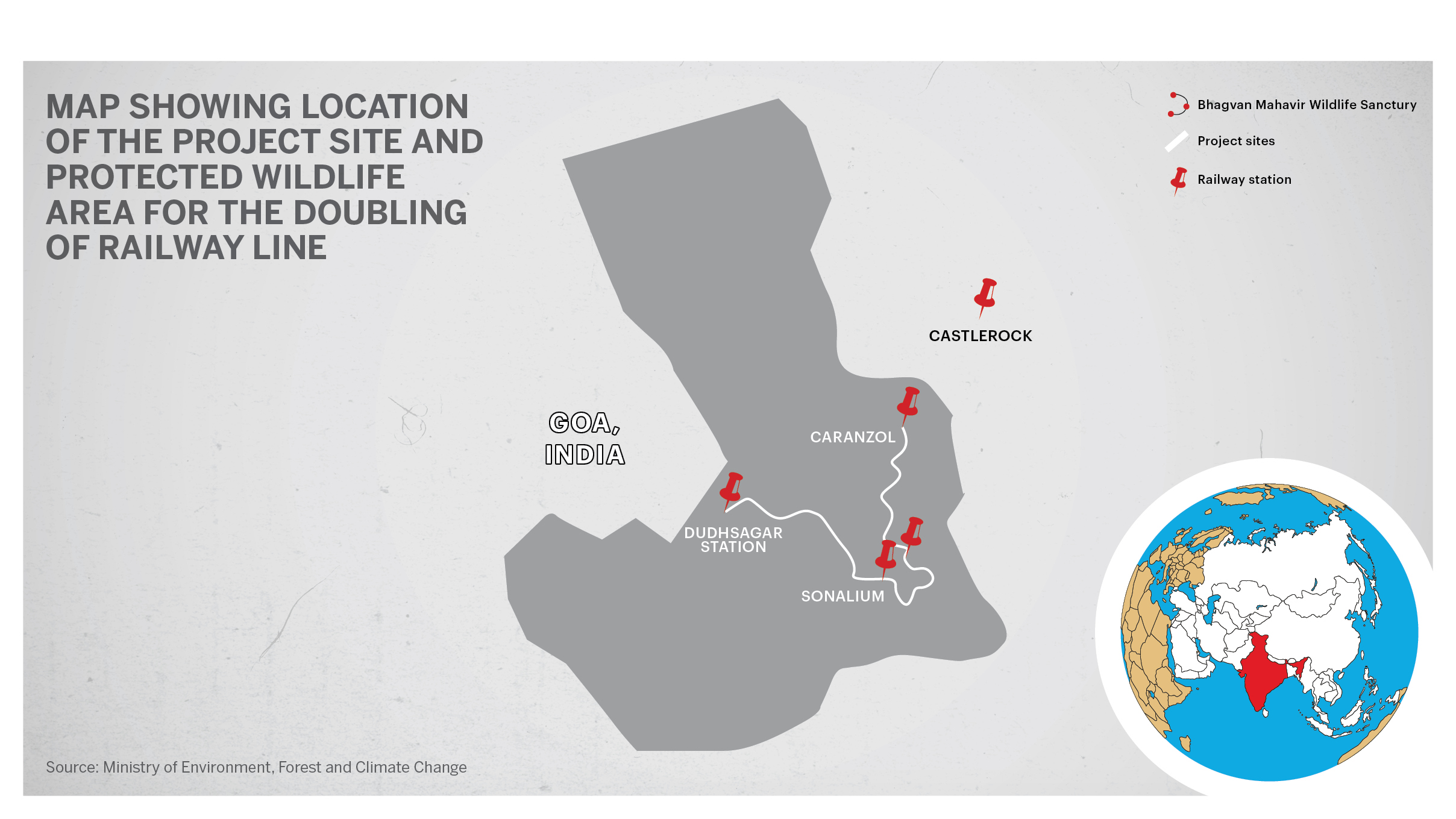 From April to June, when the country was under lockdown to prevent the spread of the novel coronavirus, the Ministry of Environment, Forest and Climate Change, the National Board for Wildlife, and the Forest Advisory Committee approved the three projects proposed in the Western Ghats. Prakash Javadekar, the minister for the environment, heads the National Board for Wildlife.

“The inspection team visited the proposed sites only once,” said Creson Antao, a footballer from Goa. “A proper environmental impact assessment requires site visits in different seasons. The same plants do not grow throughout all the seasons, so does the migration of birds and breeding patterns of animals vary with seasonal changes.”

Antao is also the founder of the 800-member Goencho Ekvott, which has been protesting the projects. He has been booked by the Maina Curtorim police in connection with the Chandor protests on Nov. 1.

The largest of the three projects is the doubling of the Castle Rock-Kulem railway line by Rail Vikas Nigam, an infrastructure arm of Indian Railways. According to its application submitted to the forest clearance department, of the 120.9 hectares required for the project, 113.9 hectares is in the protected area. The Kulem-Madgaon section of the line will require an additional clearance of 14.4 hectares of land in protected area.

The expansion of National Highway 4-A — a 153-km (95 mile) stretch between Belgaum in the southern state of Karnataka and Goa’s capital of Panaji — will result in the felling of about 12,000 trees over 31 hectares of protected forest in Goa.

The third project is a 40- kilovolt power line to be laid by New Delhi- based Sterlite Power. It will pass through 48.3 hectares of protected forest leading to the culling of over 12,000 trees.

“According to Section 29 of the Wildlife Protection Act, any project undertaken inside the national park should benefit the wildlife,” said Sreeja Chakraborty, an environment and climate change advocate. “These projects will lead to massive fragmentation of the forests because of the hilly terrain, harming the nesting grounds of the wild animals.” 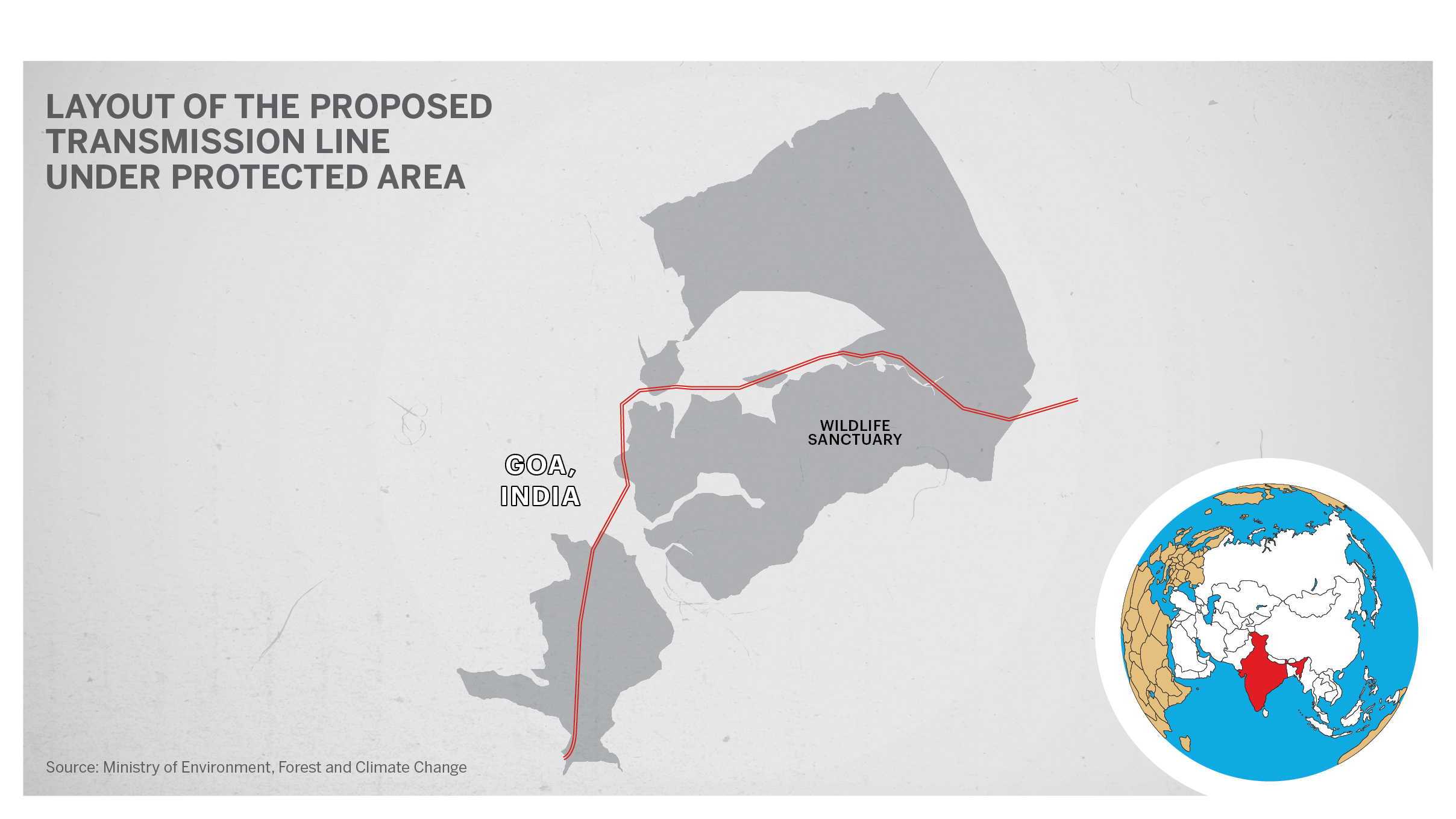 “Work for the power substation has already started outside the protected area and about 2,700 trees have already been cut,” said Omkar Dhawardkar, a naturalist, wildlife photographer and member of Amche Mollem, a collective that aims to save the biodiverse forests of Mollem.

“The transmission line passes from just about 300 meters from the heritage site of Tambdi Surla (a 12th century Hindu temple) that also has an adjoining stream,” he said.

“The erection of the transmission towers could lead to felling of more trees and more digging.  This might cause soil erosion and dry up the stream faster than usual. Residents of the area as well as animals such as otters, sloth bears, leopards, and gaurs, who frequent the stream, will be affected.”

Environmentalists say that the railway tracks are being doubled solely to expand the coal-carrying capacity of trains from Goa’s Mormugao Port to north Karnataka.

The South Western Railway, in a press briefing on Nov. 11, said that “as doubling is being done predominantly in railway land, there is no additional impact on the environment”.

The railway’s additional general manager, P.K. Mishra, said that “emphasis was being given for usage of environment-friendly sources of energy /resources for power generation.” He also said that the quantity of coal carried by railway had decreased from 12 million tons in 2015-16 to 9 million tons in 2019-20.

The current single-line railway track, built by the Portuguese (who ruled Goa until 1961) and the British in the late 19th century, passes near one of India’s tallest waterfalls, the Dudhsagar, and the nesting grounds of several endemic species, including the great Indian hornbill.

“The clearing of forests will drive wild animals towards human settlements, leading to more incidents of road kills and human-animal conflicts,” said Dhawardkar.

“Some of these forests are privately owned,” said Chakraborty. “Their sale is governed by the local tree-selling act, which states that trees spread over only one hectare can be cut in a year. Here they are chopping off trees spread over 10 hectares.”

Several researchers, students, tourism operators, and green activists say they have written to the environment ministry over the past few months but have not received a response. The office of the Minister of State for Environment, Babul Supriyo, told Zenger News that they had not received any such letters.

The Central Empowered Committee issued notices to the Environment Ministry and the Goa government after the projects were challenged by the Goa Foundation, a nongovernmental organization.

“Several environmental groups have challenged the projects in Bombay High Court and the proceedings are on. The next hearing is on Dec 1,” said Antao.

“Goa is too small for such massive projects. Once the Mormugao Port is expanded and the rail connectivity strengthened, we will have more industries coming here. This will turn our tourist hub into a coal hub, which we won’t let happen. We are ready to fight this out tooth and nail.”