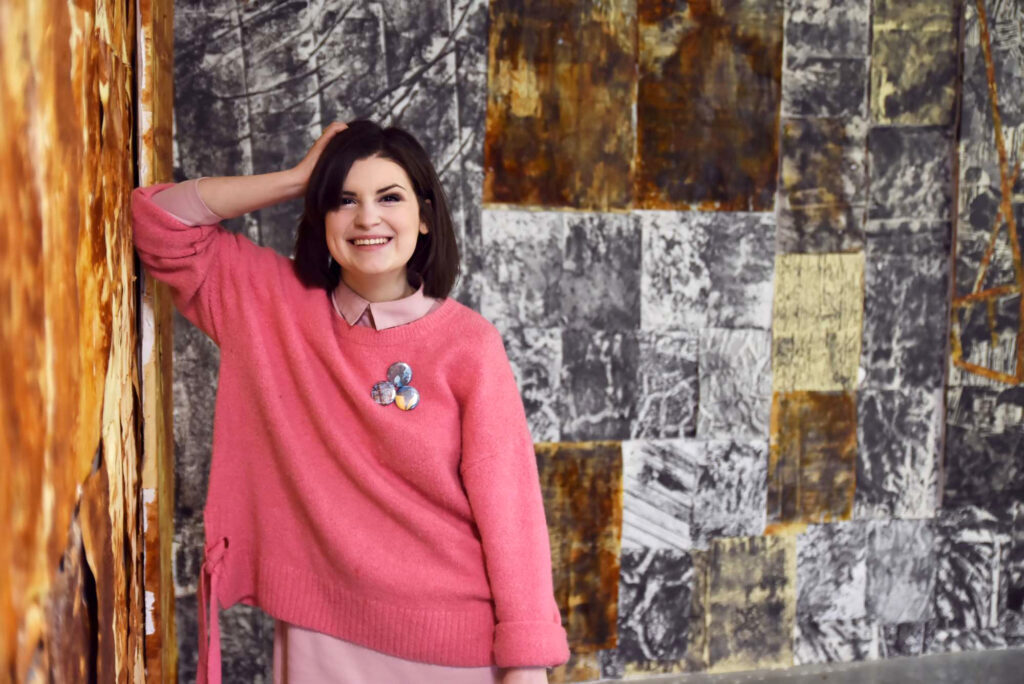 Natalia Simonova of Ziar nad Hronom, a city in the country’s Banská Bystrica Region, grows the rust herself, using a special formula to create the right composition for her urban-inspired works.

“Before I started painting with real rust, I was trying to achieve a rust effect with paint — oils, acrylics and watercolors,” she told Zenger News. “I love the color shades of rust. I was always interested in its structure and color. In the past, when I first started, I made jewelry and managed to mix some chemicals and create rust for that purpose.”

She started cultivating and using the real thing after becoming frustrated with trying to recreate the feel and textures of rust.

“I developed an absolute fascination with rust and have been studying it ever since,” Simonova said. “I only paint with real rust now. It’s exciting.”

Cultivating the rust to get the desired effects has been a challenge for the artist, who is now in her fifth year at the Faculty of Fine Arts of the Academy of Arts in Banska Bystrica, Slovakia.

“Painting with rust is a long process,” she said. “I can paint a large two-meter painting in three days, but I choose not to. I usually give it the time it needs. I always have the canvases ready in advance, and that helps me.”

Simonova explained that working with fresh rust is the only way to get the results she needs, a process that takes years. However, it can often be sourced from the local dump.

“The quality of the rust depends on whether we give it suitable conditions for growth,” she said. “When painting with rust, I use the power of ordinary water, gluing rust, etching techniques, but also the internal tangle of the chemicals, with which I have been working for years.”

Her works typically feature playgrounds and the urban environment around her, which also inspired her recent series titled, “Destruction, Post-structure and Vitiligo.” The series explores the theme of a socialist-era playground that has since decayed.

While the series won her one of Slovakia’s top prizes for painting, she isn’t done yet.

“I tend to aim high and I am constantly trying to improve and show something new and different,” she said. “I am currently working on a large series of paintings based on socialist playgrounds, mainly in Slovakia, which are marked by destruction.”

Simonova is currently exhibiting her work in a handful of Slovak and Czech galleries. Her work, titled “Chain,” which netted first place at the VUB Foundation Painting awards, carries a prize of $11,676. Twenty final competition works are on display at Bratislava’s Nedbalka Gallery through Dec. 6.