The protection of cows, considered sacred by India’s majority Hindus, has been a top priority of the government. 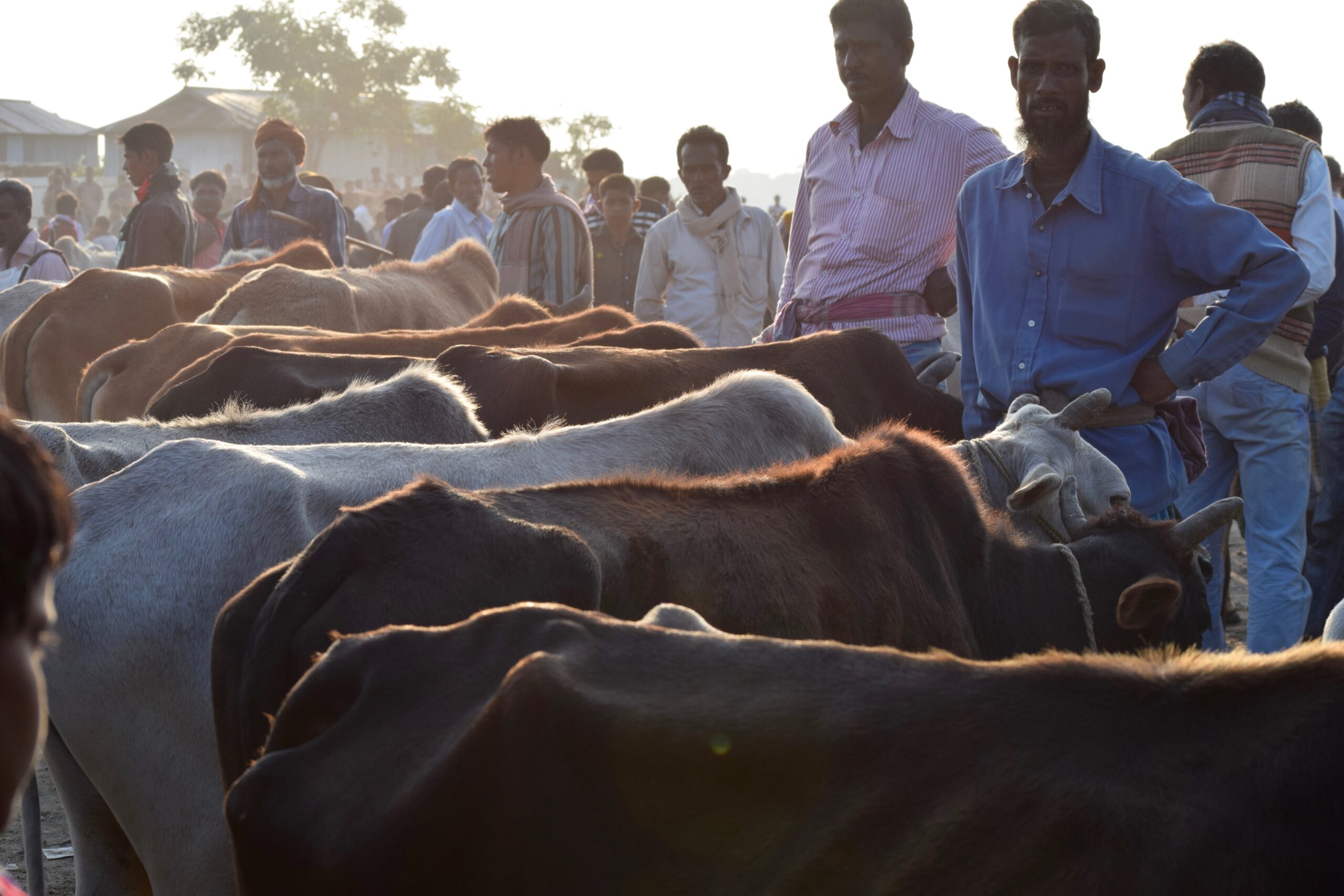 A cattle haat in Dhubri at the Indo-Bangladesh border Courtesy: Jasnea Sarma

Guwahati, Assam — An Indian Border Security Force official has been arrested for his alleged role in a multimillion-dollar ring accused of smuggling cows across the border into Bangladesh from West Bengal.

Satish Kumar, then commandant of 36 Battalion of the Border Security Force, faces corruption charges for allegedly accepting bribes and facilitating the illegal movement of cattle across the border. He was arrested by the Central Bureau of Investigation on Nov. 17. His son, other unnamed officials and three unnamed traders who allegedly bribed Kumar, are also accused in the operation.

The protection of cows, considered sacred by India’s majority Hindus, has been a top priority of the India’s governing Hindu nationalist Bharatiya Janata Party. Since Prime Minister Narendra Modi took office in 2014, cross-border smuggling has declined as the result of a government crackdown.

“In recent years, smuggling has fallen from one or two million cattle annually, to around 300,000 [in 2017-18],” according to a report by the Food and Agriculture Organization of the United Nations and the UN Industrial Development Organization. 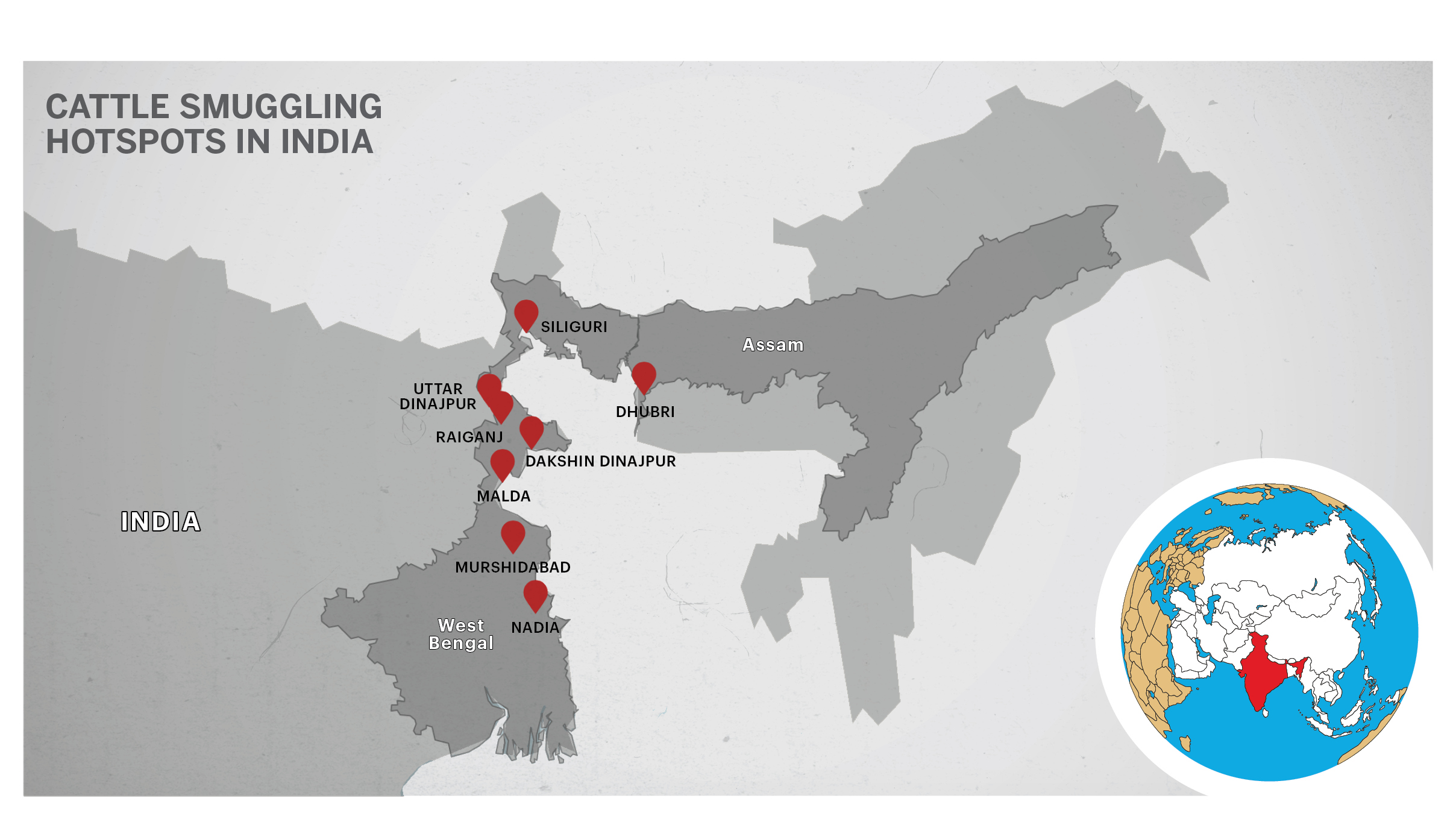 “The most affected areas of cattle smuggling are Nadia, Murshidabad, Malda, Dakshin Dinajpur, Uttar Dinajpur, Raiganj, Silliguri in the State of West Bengal and Hubris in Assam,” according to a 2017 parliamentary committee report.  It also states that smugglers and their agents come from a number of states, and that the local population in the border villages considers the smuggling a source of livelihood.

In September of this year, the Central Bureau of Investigation was reported to have conducted raids at more than a dozen places in Kolkata and the districts bordering Bangladesh in connection with the most recent smuggling case.

The allegations against senior officials in the Border Security Force which first surfaced in 2018, has led to more vigilance.

“The people who have been posted [in the last 18 months after the probe started] are of high integrity,” said S.S. Guleria, deputy inspector general of the border force in West Bengal. “We have strengthened the internal vigilance and intelligence systems and they are working well in keeping a vigil internally as well as on the smugglers.”

Guleria, who heads the intelligence wing of the border force in the South Bengal Frontier, said the security force there has been able to stop smuggling. “The border guards have built wide four-feet-deep and four-feet-wide trenches to create an obstacle for the smugglers. In other places, they have tried to secure the riverine areas,” he said.

The complaint against Kumar reviewed by Zenger News states that while 20,000 cattle were seized by the Border Security Force during his tenure in West Bengal, no vehicle or smuggler was apprehended.

The federal agency started investigating Kumar in May 2018, a few months after the arrest of another senior Border Security Force official, Jibu D. Mathew, on a train. He was accused of having accepted a bribe of INR 4,530,500 ($61,236) from Inamul Haq, an alleged smuggler operating at the Indo-Bangladesh border in West Bengal.

Haq, who is also mentioned in the recent complaint, is accused of paying INR 2,000 ($27) per cow to the border guards and INR 500 ($6.75) per cow to the customs agents.  The border guards, along with the customs officials, would then allegedly list smaller sizes for some of the cattle. Since the seized cattle were auctioned by customs, the smaller size meant lower value. Customs agents allegedly received an extra 10 percent of the total price of cattle in the auction as bribes from the smugglers.  The complaint also states that only a few traders, allegedly including Haq, were allowed to take part in the auctions.

In 2017, India’s Supreme Court suspended a government ban on the sale of cattle for slaughter.

An individual cow, which costs INR40,000- 50,000 ($541-676), including transportation and other costs, allegedly fetches more than double the price in Bangladesh after duty is levied on it and it becomes a legal commodity.

The intricate web of smugglers, the alleged involvement of security personnel and porous borders make it difficult to check cattle smuggling. Border guards say the carriers may walk the cattle toward the border and sneak them into Bangladesh, put them on boats or take them across the river or tie their legs and make them swim with the current with help from banana stems.

“Cattle smuggling was difficult during lockdown because transportation from other states was not possible,” said U.K Nayal, deputy inspector general of the Border Security Force in Meghalaya. But, smugglers are back at work again. Last week, border guards detained six people and over 50 cattle in Dawki on the Indo-Bangladesh border in Meghalaya.

Namrata Acharya contributed to this report.