Accusations by attorney Sidney Powell are among the unproven claims by GOP backers who insist Trump was robbed on Nov. 3.
By Paul Brandus November 21, 2020
Facebook
Twitter
Linkedin
Email 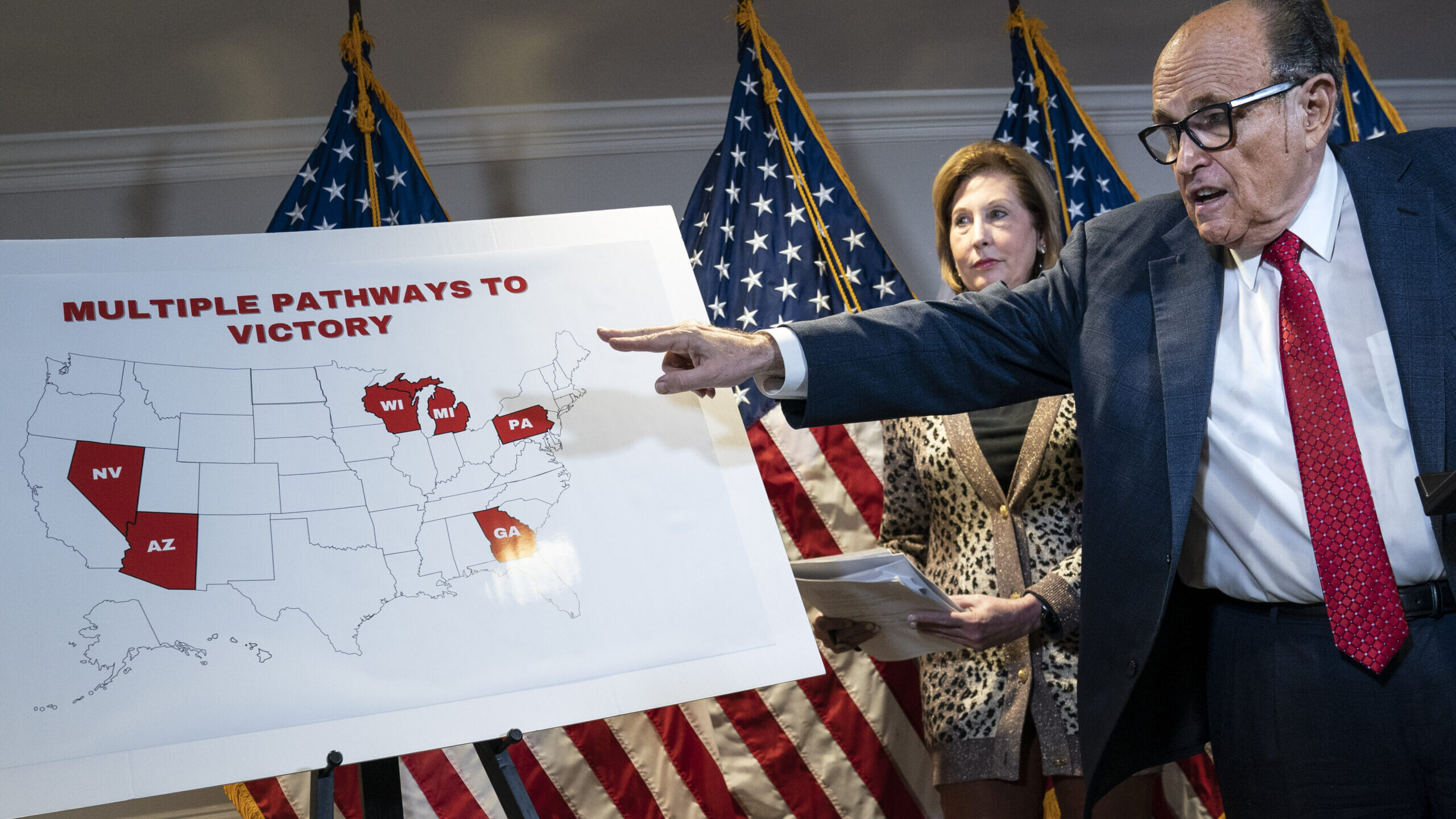 WASHINGTON, DC - NOVEMBER 19: Rudy Giuliani points to a map as he speaks to the press about various lawsuits related to the 2020 election, inside the Republican National Committee headquarters on November 19, 2020 in Washington, DC. President Donald Trump, who has not been seen publicly in several days, continues to push baseless claims about election fraud and dispute the results of the 2020 United States presidential election. Also pictured, at center, is attorney Sidney Powell. (Photo by Drew Angerer/Getty Images)

In a hastily called Washington news conference on Nov. 19, the attorney, Sidney Powell, also claimed a “communist money” scheme also likely involved Cuba and “likely China.” Without offering any proof, she said the three countries likely financed software that was used to tilt the election in Biden’s favor.

The claim was the latest in a string of unsubstantiated attacks on the integrity of the Nov. 3 vote, and came on the same day the Trump campaign suffered its 30th courtroom setback in efforts to challenge results in swing states.

As the White House continues to fight Biden—it still refuses to cooperate with his transition team—some Republicans have begun to edge away from the administration. Others have leveled accusations of their own.

Texas Rep. Louie Gohmert has made one, citing a tweeted claim that U.S. military officials in Germany raided the offices of an electronic voting systems company, Scytl, and confiscated servers. That, Gohmert said, was evidence of voter fraud.

Gohmert has since conceded he’s not sure what, if anything, happened.

“I don’t know the truth,” he said during an interview on Newsmax, the conservative cable news channel. “I know that there was a German tweet in German saying that on Monday, U.S. Army forces went into Scytl and grabbed their server.”

Trump’s allies have claimed data on that server would show that Trump won re-election by a landslide, even winning California, which went 2-to-1 for Biden and hasn’t backed a Republican since George H.W. Bush in 1988.

Scytl, based in Barcelona, Spain, bills itself as the “worldwide leader in secure electronic voting, election management and election modernization solutions,” and says the only thing Gohmert got right is that he doesn’t know the truth.

“Servers in Frankfurt were used as back-up servers for a specific project for the European Parliament in 2019. These back-up servers were closed in September 2019,” said Gwendoline Savoy, a company spokeswoman.

“The U.S. Army has not seized anything from Scytl in Barcelona, Frankfurt or anywhere else,” she said, and “the company does not have offices in Germany.”

Scytl also “strongly denies any accusation related to election fraud,” Savoy said. “Scytl does not tabulate, tally or count votes in US public elections. We did not provide online voting to U.S. jurisdictions for the US elections.”

Re-elected this month to his ninth term in Congress, the 67-year old former Texas judge is no stranger to controversy and conspiracy. After voicing skepticism over the severity of the coronavirus pandemic, he became infected during the summer and blamed it on the mask he wore. The incident prompted House Minority Leader Kevin McCarthy to call him “Congressman COVID.”

During a congressional hearing in 2017 with then-Attorney General Jeff Sessions, Gohmert unveiled a sprawling spiderweb-like chart which he said showed deep corruption in the Justice Department during the presidency of Barack Obama.

Gohmert in 2014 was sympathetic to a radio show caller who suggested the 2012 Sandy Hook school massacre, which left 20 children and six adults dead, may have been a hoax perpetrated to advance gun control. “I’m always learning new things and appreciate the input,” he said then, promising to watch a conspiracy theory video about it.

President Trump continues to claim that widespread voter fraud killed his re-election bid, tweeting that Biden “won because the Election was Rigged.” The president, who has yet to concede or offer independently confirmable evidence that he was cheated, has launched an array of lawsuits in key states, none of which has been successful.

Trump fired Cybersecurity and Infrastructure Security Agency chief Chris Krebs this week for what the president called “highly inaccurate” remarks about election integrity. Krebs, a Trump appointee, angered the president after his agency released a statement calling the 2020 election “the most secure in American history.”

The statement said that “[t]here is no evidence that any voting system deleted or lost votes, changed votes, or was in any way compromised.”