India-China Cultural Relations Thrive in the Time of Border Conflict

While the ongoing standoff threatens to impact India-China academic and cultural exchanges, some are building bridges 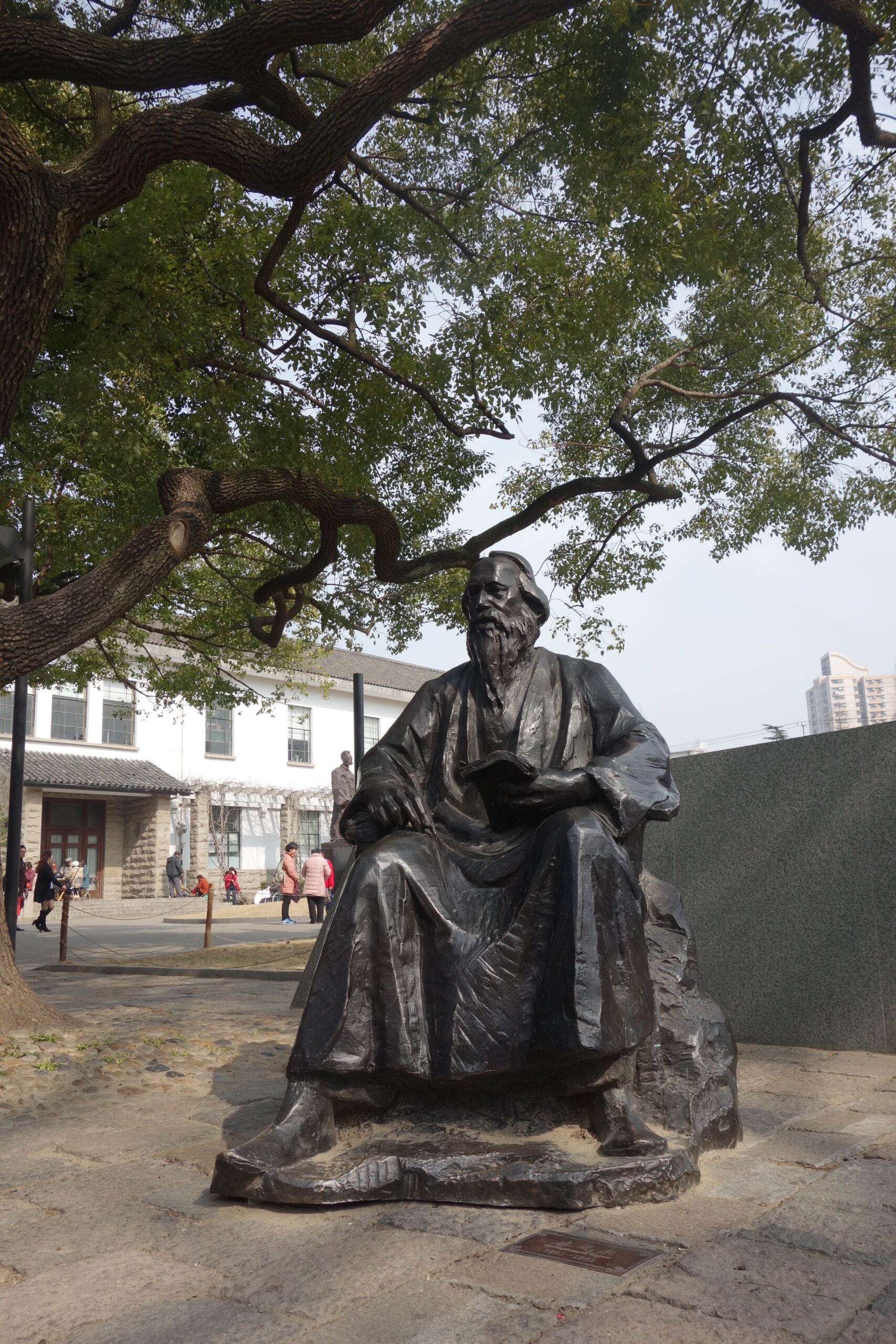 A statue of Rabindranath Tagore in Lu Xun Park, Shanghai. The park has statues of other literary and scientific luminaries. Tagore has a pride of place among them. (Courtesy of Bivash Mukherjee)

It was a virtual ceremony of a different kind in Puducherry in the southern part of India, on October 26 this year.

Puducherry Chief Minister V Narayanasamy and the Chinese Ambassador to India, Sun Weidong, jointly inaugurated the XuFancheng Culture Study Center in the Union Territory town, formerly known as Pondicherry, in South India. While Narayanasamy was present at the center for the opening ceremony, Weidong joined in virtually from Delhi.

Xu Fancheng was a Sanskrit scholar, who left China for India in the 1940s and lived in the erstwhile French settlement for 27 years. Fancheng, who painted and mastered Chinese calligraphy as well, had translated several Indian literary, philosophical and religious texts into Mandarin. The inaugural ceremony held at the Puducherry center marked Fancheng’s 111th birth anniversary.

“If the spotlight is turned on Xu Fancheng and his seminal works, more and more people can start learning about India-China relations,” says Dr Das, a doctor by profession.

He studied medicine at Dali University in Yunnan province and practiced in China for about a decade before returning to India in 2016. Currently, he is an independent researcher focusing on India-China relations.

Dr Das says that the center’s library, home to a wide collection of books on Chinese culture, is open to anyone who evinces a keen interest in knowing about Sino-Indian academic and cultural ties.

“We don’t focus on politics,” he stresses.

While Puducherry was celebrating Fancheng’s body of work, a group of literary buffs in Shanghai paid their tribute to Gurudev Rabindranath Tagore, the first Asian to win the Nobel Prize for Literature for his celebrated collection of poems, Gitanjali.

An interactive reading activity was organized by a popular bookstore in Shanghai in the last week of October this year.

“A play marking Shanghai’s ties with world luminaries had an act on Tagore as well. One of the actors, in a complete Tagore get-up, recited one of his popular verses,” says Bivash Mukherjee, senior journalist, author and columnist, who has been living in Shanghai for the past two decades.

“Tagore is a name that crops up during all India-China activities — social and political. It’s a given,” adds Mukherjee, who made a documentary titled ‘Gurudev — A Journey to the East’, tracing the Bard’s visit to China in the 1920s.

Mukherjee, who received the Magnolia Gold Award from the Shanghai authorities for outstanding expat contribution to the city a couple of years ago, is also part of a private initiative called Chaiti Arts Festival in the city.

“It’s a multi-cultural body based in Shanghai and run by a few inspired individuals,” he says. “They have managed to get some big names performing in Shanghai and elsewhere in China, including the likes of sarod maestro Ustad Amjad Ali Khan along with his two famous sons, among others.”

This year, because of the COVID-19 restrictions, the organizers managed to put together an online event that was just recently broadcast on Youku, the Chinese version of YouTube.

Needless to say, these are turbulent times once again for India-China relations. At a time when the COVID-19 crisis was peaking not only in India but also elsewhere in the world, news of Indian and Chinese soldiers locked in a border standoff along the India-China border in the Galwan Valley, Eastern Ladakh, came trickling in.

Following the Galwan faceoff in June this year, the Indian government banned a host of Chinese apps in India, including the widely popular app, TikTok. While talks continue on both sides to resolve issues, border tension, along with the pandemic, threatens to undermine cultural and academic collaborations and people-to-people exchanges in the two countries.

But, as the Puducherry and Shanghai initiatives show, not all are daunted by the simmering hostility between the two Asian giants. Many in the cultural and academic fields in both India and China want to do their bit to enhance collaboration and friendship.

“There are occasional pauses and inactivity of course,” says Mukherjee. “As far as I can remember, even during and after the Doklam crisis (2017), tour groups from India continued to travel to China. And the Chinese were traveling in good numbers to India too. Much of South Asia — the people, their lives, the social system — is still an enigma to them. There is genuine interest in knowing us better.”

“If one talks of the long tradition of religious or cultural exchanges between India and China, one will have to look at the trajectory of such exchanges continuing uninterrupted from as far as back as the Spring and Autumn period in Chinese history (3rd century BC) and into the colonial era (late 18th century to early or mid 19th century),” says Hemant Adlakha, professor of Chinese, Centre for Chinese and South East Asian Studies (CCSEAS), Jawaharlal Nehru University (JNU), Delhi, and Honorary Fellow, Institute of Chinese Studies, Delhi.

He further says that in more recent years, especially between 1950 and 1959, and 1978 onwards, in terms of cultural exchanges and language courses, both countries have been experiencing a phenomenal growth.

“It must be pointed out, in the 50s, China had been far more enthusiastic as well as proactive in the expansion of learning/teaching of Hindi and other Indian languages in China,” he says. “On the other hand, India started paying more attention to learning/teaching of Mandarin — at the higher education level — first during the 1970s and the 1980s and then during the globalization era.”

Currently, there are more than 20 Indian universities — central and provincial — offering degree courses in Mandarin/China studies, including BA, MA and PhD courses, according to Professor Adlakha. Apart from these, there are scores of business management schools offering specialized short-term courses in Chinese language, culture and history.

CCSEAS too has been providing academic inputs and assistance to the Chinese embassy in holding Chinese Language Bridge Contest, titled the HSK.

“The popularity of the HSK has been rising in India in recent years,” says Professor Adlakha.

Dr Das of the XuFancheng Culture Study Center wants to introduce Chinese language and culture studies courses at his institute soon. Plans are afoot to tie up with Yunnan’s Dali University in this regard.

“We are planning language courses — e-learning or offline courses — that can be offered at the center,” he says. “But this will take time. Unlike in previous years, we now have to wait for several layers of permission from the Central government before we can introduce such courses. But it will happen in due course of time.”

From time to time, top leadership in both countries has noted the significant role academic exchanges play in strengthening relations. During Indian Prime Minister Narendra Modi’s visit to China in 2015, both sides agreed that “enhanced exchanges among education institutions of the two sides will play a positive role in socio-economic development” for both countries, according to a joint statement released by the Indian Ministry of External Affairs at that time.

Speaking of collaborations between JNU’s CCSEAS and Chinese universities, Professor Adlakha says that in the past, the university has had direct collaboration with academic institutions in China, including exchange of students, faculty training programs, joint seminars and so on.

“More recently, we have the system of MoUs signed between JNU and universities in China. We do have academic activities involving the CCSEAS and universities/think tanks in China,” he said.

“We have a series of academic activities planned for this year and next year (both countries had announced to hold 70 cultural, academic, diplomatic activities to mark the 70 years of India-China diplomatic ties this year).”

However, he reveals, all planned celebrations have been put on hold due to COVID-19 earlier in the year and then following the border standoff.

Academicians in premier Chinese universities too are looking forward to tie-ups with their Indian counterparts.

“Recently, I did great collaborative work with Professor Bhargab Bhattacharya of IIT-Kharagpur on digital systems design for testability and testing; we co-authored a paper too,” says Dong Xiang, professor with the School of Software at Tsinghua University, Beijing, one of the top universities in the world whose notable alumni include the current President, Xi Jinping.

Professor Xiang is eager to collaborate with Indian academicians in the field of technology in the near future.

“We’d like to introduce Tsinghua Overseas Program at Electrical Engineering (TOP EE) to our Indian colleagues and friends,” says Professor Yu Wang, Chair of the Department of Electronic Engineering and Dean of the Institute for Electronics and Information Technology in Tianjin, Tsinghua University. “TOP EE’s mission is to provide talents with ‘world-top’ level of study and research experiences while having a choice of earning industrial internship with a touch of China.”

Kolkata-based social entrepreneur Chaitali Das feels that the importance of people-to-people connect cannot also be overemphasized. She has been part of several Indo-Chinese cultural projects in Kolkata and has visited China twice to learn about the Chinese government’s waste management and poverty alleviation initiatives.

“On both occasions, I have been part of all-women delegations,” says Das. “Last year, we went to a remote village in China to understand the Chinese government’s poverty alleviation efforts. We were moved by the hospitality we received — we don’t understand each other’s language, but we certainly do understand the language of love and affection. That’s what people-to-people connect is all about.”