The rise of agri-tech firms that are helping farmers market their produce, coincides with a change in agriculture laws in India.
By Neeti Jaychander November 20, 2020
Facebook
Twitter
Linkedin
Email 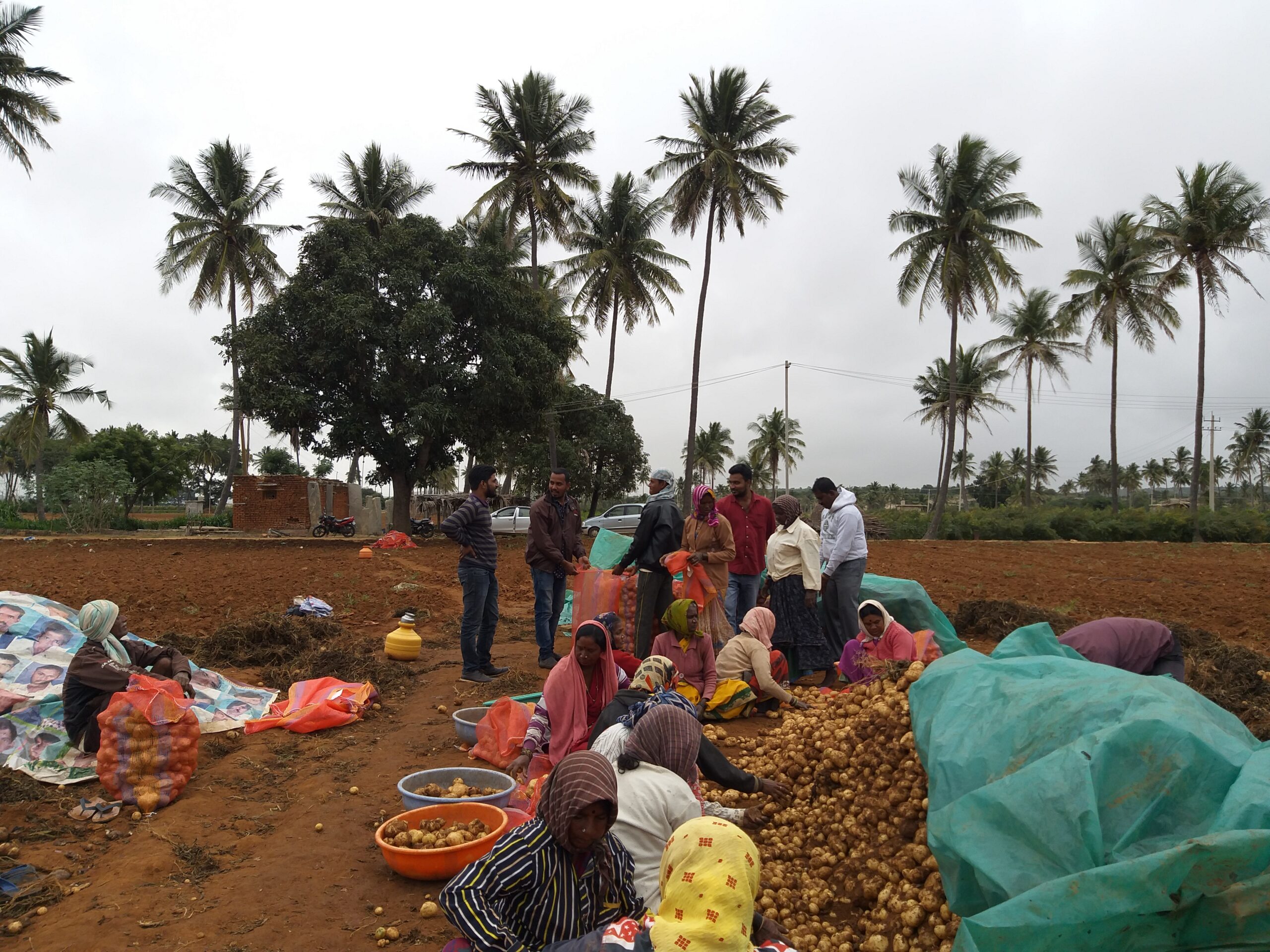 Earlier this year, farmers in Anantapur, a city in the southern Indian state of Andhra Pradesh, were left with huge volumes of unsold sweet lime. While there was no local demand, the farmers were unable to transport the produce elsewhere due to a lockdown.

The farmers were bracing for huge losses, when KisanSaathi, an agriculture marketing firm, offered to sell the crop to Mother Dairy, a food processing company.  Many farmers in the city today supply sweet lime to Mother Dairy.

“I have been selling my mosambi (sweet lime) for four years now, but I have never seen kind of sorting and grading that KisanSaathi enabled,” said Mahendar Vennapusa, a sweet lime farmer from Anantapur.

Over the last few years, a clutch of agri-marketing firms have surfaced across India, promising to transform farm marketing through technology-driven supply chain management. This includes names like AgriBazaar, Crofarm, Unnati and Freshokartz, apart from KisanSaathi.

The growth of these firms coincides with a time when India is looking to overhaul its archaic agriculture marketing norms.

In September this year, the government introduced three bills on agriculture, which among other things, allow farmers to sell their crop outside defined markets governed by an act called Agriculture Produce Marketing Committee (APMC) Act.

In April, when India was in the middle of a lockdown, the government of India promoted the concept of direct marketing of agricultural produce bypassing the APMC Act. This enabled farmers to sell their crop directly to purchasers, boosting the prospects of agri-tech firms.

“There are farmers, who have gone beyond just basic farming practices and developed skills like packaging and branding,” said Gopinath Sheregar, CEO and Co-Founder of Bengaluru-based AgroBlock.  “However, there are many farmers who do not have access, know-how or tools to market their products.”

“Initially, we thought it would take another three years to shift and transform the process. However, two factors have accelerated this — the Covid-19 pandemic and the Farm Bill 2020.”

“Today, we are in talks with companies like Flipkart on how we can procure directly from the farmers and supply to them. At least 25 such new online retailers in the grocery space have emerged in Bengaluru alone over the last three months,” said Sheregar.

India is one of the largest producers of agricultural commodities in the world, but equally big is the wastage associated with it.

India achieved record food grain and horticultural production of 281 and 315 million metric tons respectively in 2018-19. However, nearly 40 percent of food produced in India goes to waste, according to estimates from the United Nations, as stated in a report  by the National Academy of Agriculture Sciences.

India incurs a loss of roughly Rs 2 trillion (about $27 billion) per year because of food wastage, said Prem Rathod, founder and CEO of KisanSaathi.

“Ninety percent of agricultural farmers own small farms, with an average of an acre or two. It is practically impossible to deal with fragmented land, and supply directly to customers, especially if the demand is high from a private company,” says Rathod.

“With aggregation, small-scale farmers are able to supply to big clients. This model of functioning is called an FPO (Farmer Producer Organization), or a collective farming approach.”

Farmers can achieve significant economies of scale in terms of the purchase of seeds, pesticides and other raw material, says Rathod. In the process, they can save around 20 percent in terms of cost. Today, there are almost 15,000 FPOs across India.

KisanSaathi has also been helping farmers enhance the production of rose onion, a Geographical Indication tag produce and popular crop from Chikkaballapur in Karnataka. The crop has a huge demand in Tamil Nadu and the international markets, specifically Malaysia and Indonesia.

“Previously, we were selling to local middlemen with no idea about the market price or export price of rose onions,” says P Srinivas, President — Sadali FPO, Karnataka.

“Under Kisan Saathi’s guidance, we have been facilitated to work with exporters on our rose onion marketing. Now, we have streamlined market access with Chennai exporters and are educated on current prices as well as supply-demand dynamics updates.”
AgroBlock has been tracking the agricultural produce pre-harvest and post-harvest by integrating technology with agriculture.

This helps farmers keep track of the produce, the estimated time of production and the market supply.  Through this monitoring service, farmers have been able to ensure that buyers are lined up well in advance, and farmer produces data is available to them, like a monitoring service.

In order to win the trust of the farmers AgroBlock has been working with around 500 students, deployed at every village to help and guide them in taking steps towards digital transformation,” says Sheregarh.

“Here, help is coming from youth, rather than middlemen. Sometimes, reaching the farmers is still a challenge, as they don’t trust easily, so if colleges take such initiatives and adopt these villages, it might help bring about a shift.”

While plant crops and produce form a major part of agriculture, the agri-tech movement also includes poultry and livestock, farming, aquaculture (the farming of seafood and aquatic plants) and sericulture (silk farming or the cultivation of silkworms to produce silk).

Organizations like Reshamandi.com are trying to digitize India’s silk supply chain. While India and China control 99 percent of the market, India only accounts for 24 percent of this.

Most of the industry (in India and elsewhere) is largely dependent on yarns from China, and that is the space that Reshamandi is looking to break into, especially since there is a ban on importing certain items from China.

“State governments have their own marketplaces, where the cocoon trade happens. During COVID-19, no one wanted to travel,” says Mayank Tiwari, Founder — Reshamandi.

“To make sure that farmers didn’t need to travel to the markets, in June 2020 we started Reshamandi,” says Tiwari.

“We set up a small sourcing center in Sarjapur, Karnataka, and told farmers they don’t need to travel. We did the testing ourselves and listed it on digital platforms. Initially, it was a bio-driven business.”

“We offered competitive pricing, as well as a better handle on the revenue. Initially, although I had to travel a lot, we connected with 100 farmers in the first month. Today we have 500 farmers and have done around ₹ 3.5 crores ($469 thousand) worth of business. There are 50 dealers constantly working and buying from us.”