Gowri Shankar has created a yarn similar to cashmere using the fibers of the calotropis plant, a common weed found in India 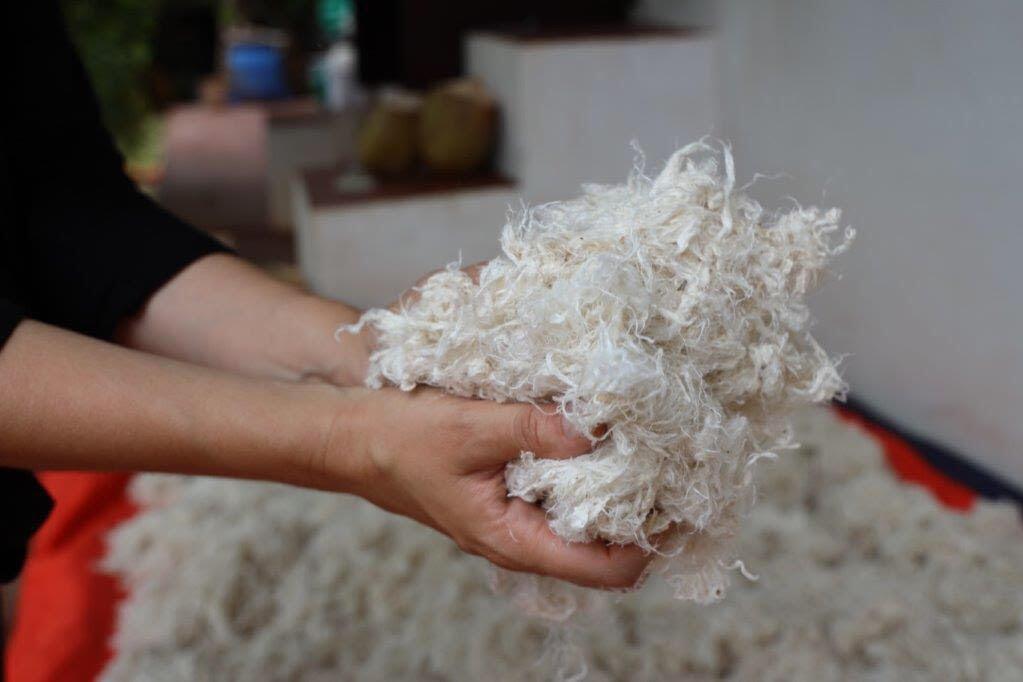 The vegan "wool" developed by Gowri Shankar is as fine as cashmere. (Courtesy of Infantium Victoria)

The calotropis is a common weed found in plenty in the Indian countryside. A hardy plant with large, waxy leaves and purple and white flowers, it flourishes in dry and harsh conditions, and barely gets any attention, even from cattle, because of its highly toxic sap.

However, for Tamil Nadu entrepreneur, Gowri Shankar, it is gold. 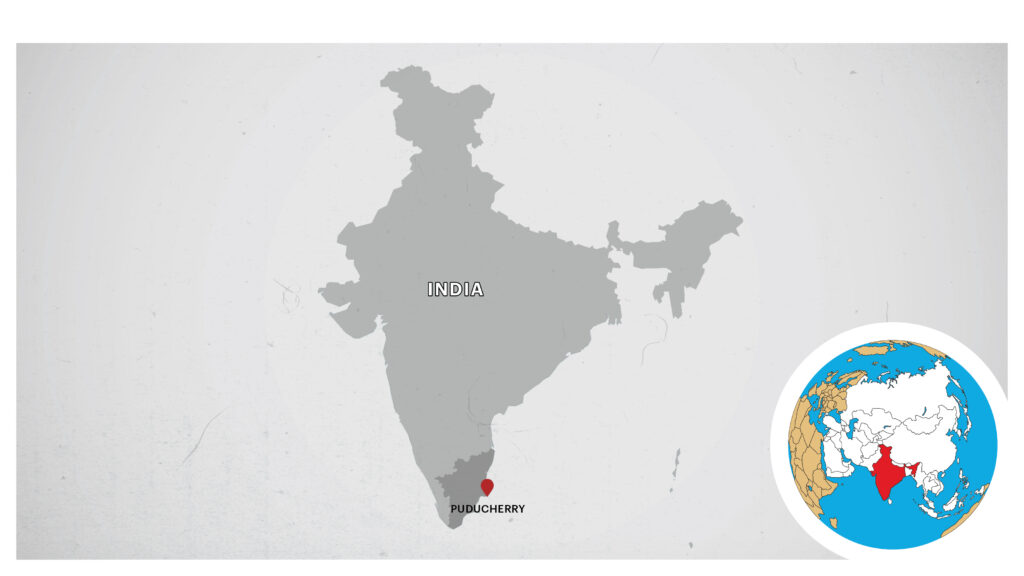 The plant, also called milkweed because of the latex it produces, is the source of a plant fiber, similar to hemp and linen, that has been developed as a vegan alternative to wool by Shankar, a former fashion merchandiser.

“The fiber from calotropis has traditionally been used by some rural communities in South India to make a rough yarn,” said Shankar speaking to Zenger News. “However, we discovered that by tweaking the production process and by adding 70 percent cotton, we were able to produce a fiber that is strong and warm as wool.”

Weganool, as the yarn is called, is warm because calotropis fibers have a  hollow cellulose structure, unlike most plant fibers, and are excellent for trapping heat.

The calotropis used for Weganool is not cultivated but foraged from the barren dry lands around Shankar’s farm near Puducherry (a former French town and seaside resort in Tamil Nadu), where the extraction of the fibers is done by local farmers and the women of the area.

Shankar’s plant-based ‘wool’ has caught the attention of European design houses at a time when the concept of vegan clothing is fast catching on in the continent.

According to a 2019 survey conducted in Italy by Statista, 16 percent of respondents said they would buy cruelty-free and vegan fashion, while seven percent said that they were already doing so. In fact, the survey also showed that the 21 percent of those surveyed were buying fewer clothes for ethical reasons.

Infantium Victoria, a German brand that specializes in sustainable ‘vegan’ clothing, found Shankar’s Faborg on Instagram. Its creative director Dinie van den Heuvel followed it up with a visit to India and was pleased to find that it met her expectations.

“Our brand Infantium Victoria specializes in high-end vegan fashion for kids,” said co-founder Julia Gaydina. “Dinie spends a lot of time sourcing plant-based fabrics that would make collections interesting aesthetically. Unfortunately, before finding Weganool none of the plant-based fabrics on the market could compare to wool’s fluid drape.”

“The fabric doesn’t itch, is comfortable and safe for the skin,” said Gaydina.  “Even adults have written to us saying that they want clothes made for them in this fabric. So maybe this is something we might look into in the future.”

Shankar, who comes from the Devanga weaver’s community of Tamil Nadu, has been around textiles all his life. However, it was only when he was working in the Indian fashion industry as a merchandiser that he mulled upon starting a sustainable fashion initiative called Faborg using the humble calotropis.

“This plant needs no water, no irrigation technique, and grows in barren land in huge amounts all over India,” said Shankar. “Even the cotton that is used to create Weganool is rain-fed, thereby making it less water-intensive than cultivated cotton. No chemicals are used at any stage of the process, right from extraction to the dyeing with natural colors.”

Milkweed fiber fabric may be the next big thing in vegan fashion but Shankar is equally excited about another by-product of the plant—a natural pesticide and insect repellant called “Arka.”

“Calotropis extract was used by Indian farmers as a pesticide before chemicals took over,” said Shankar. “We did our own research and created Arka by mixing calotropis plant extract and other herbs to create a solution that is a natural fertilizer and an insect repellent.”

Shankar has been retailing Arka at a subsidized price of Rs 60 per litre and it has been quite a hit with famers not just in Tamil Nadu but other states as well. The pesticide is shipped to farmers all over India after they order it online through the Faborg website, or call Shankar on the numbers mentioned there.

Rachana Rao, a small farmer in Tindivanum in Tamil Nadu, has been using Arka on her 25-acre scrub forest land that serves as a kitchen garden and fruit orchard with mixed fruits.

“I have mixed Arka with a couple of other organic fertilizers,” said Rao who soon intends to open a food-processing kitchen. “I found that it is important to spray it consistently every two weeks. It works well to keep pests away and multiplies good microbes in the soil.”

At the moment, Shankar is satisfied with his European orders for Weganool and the popularity of Arka within his immediate farming community. However, there is one thing that is giving him some anxiety — the Chinese.

“I have found out that the Chinese have been trying to cultivate calotropis in Africa after genetically modifying it to produce more fibers. While, it’s worrying enough that this could be disastrous to the ecosystem, it is also a point to consider that the Chinese Government is pumping in so much money into calotropis research, while there is no such initiative from ours.”

“My presentation to Indian Prime Minister Narendra Modi on my work with calotropis and my vision of opening 1000 units of Faborg all over the country to benefit farmers, that I submitted earlier this year, still hasn’t received a response.” 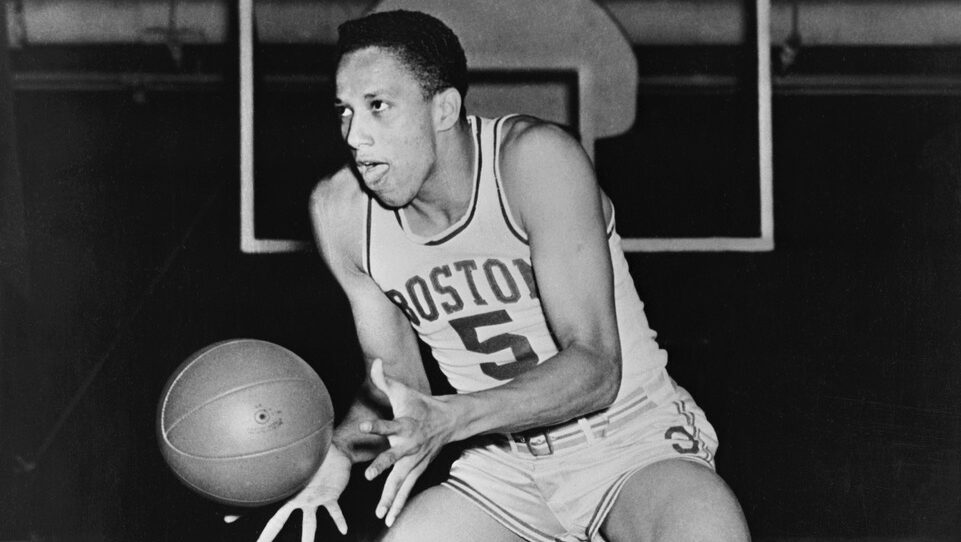