Chicago Penguins Go to the Theater 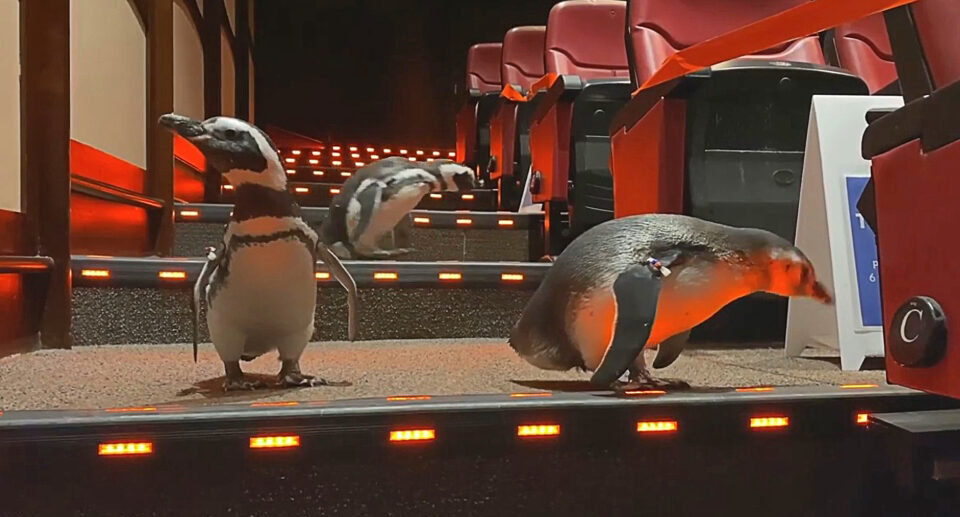 Adult Magellanic penguines Dolores and Sparrow, and youngster Sir Elio were allowed to waddle around the theater. (Photo by Shedd Aquarium/Sam Cejtin/Newsflash)

CHICAGO— The 4D Theater in Chicago’s Shedd Aquarium recently opened its doors to a trio of unusual visitors.

Adult Magellanic penguins Dolores and Sparrow and youngster Sir Elio were allowed to waddle around its theater and examine their surroundings.

A video of their outing was shared on Facebook by The Shedd Aquarium in mid-November.

Magellanics, named for the explorer Ferdinand Magellan, who first saw them in 1520, live 25 years in the wild. According to the aquarium, the outing was beneficial to the birds, allowing them to experience new spaces, sights and smells.

“Fun fact: penguins waddle because their legs are behind their hips!” the Shedd Aquarium noted.

However, a few days after these images were released, the aquarium announced it is closing until at least Jan. 2, due to city and statewide COVID-19 mitigation efforts. The aquarium is home to more than 32,000 animals of 1,500 different species, including fish, marine mammals, birds, snakes, amphibians and insects.

“We care for over 30 penguins at the aquarium, representing two different species,” said Johnny Ford, assistant director for public relations for the Shedd Aquarium. The aquatic birds are adventurous by nature and enjoyed the novel experience, he added.