Despite Attempts at Peace, Violence Increases in Afghanistan

An attack at Kabul University killed 32 people this month and at least 24 students were killed in a suicide bombing in October. 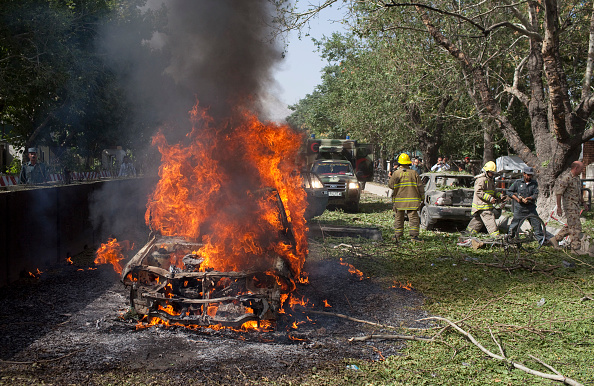 A car is engulfed in flames after a suicide car bomb exploded near the main gate of the NATO headquarters, killing three Afghans and wounding 70, on August 15, 2009, in Kabul, Afghanistan. The Taliban claimed responsibility for the attack which happened ahead of the second presidential elections on August 20, 2009. (Photo by Nichole Sobecki/Getty Images.)

Kabul — Muhammad Mohibullah, a 21-year-old student of literature at Kabul University in the capital of Afghanistan, entered campus from the north gate on Nov. 2 and was walking toward his classroom when he heard gunfire.

“There was routine checking at the gate. I heard gunshots in the law faculty building. Soon students came running out and I was caught in the melee,” he told Zenger News.

Three armed assailants had launched their attack in buildings during a book fair on the campus.

“I saw a few students jump off the second-floor balconies of the building,” said Mohibullah. “The sound of gunfire got louder. We all ran towards the north gate, but the guards directed us towards the south gate.”

The Islamic State of Iraq and the Levant (ISIL) claimed responsibility for the attack in which at least 32 people were killed and 50 more injured.

Despite first-ever peace talks between the Taliban and the Afghan government in September, following a U.S.-Taliban security deal in February, violence in the country has been on the rise since the talks began

On Oct. 24, a suicide bomber attacked Kawser-e-Danish Centre, an educational institution in west Kabul, home to many Shia Muslims. At least 24 students between 15 and 26 years old were killed, and 50 others were injured. 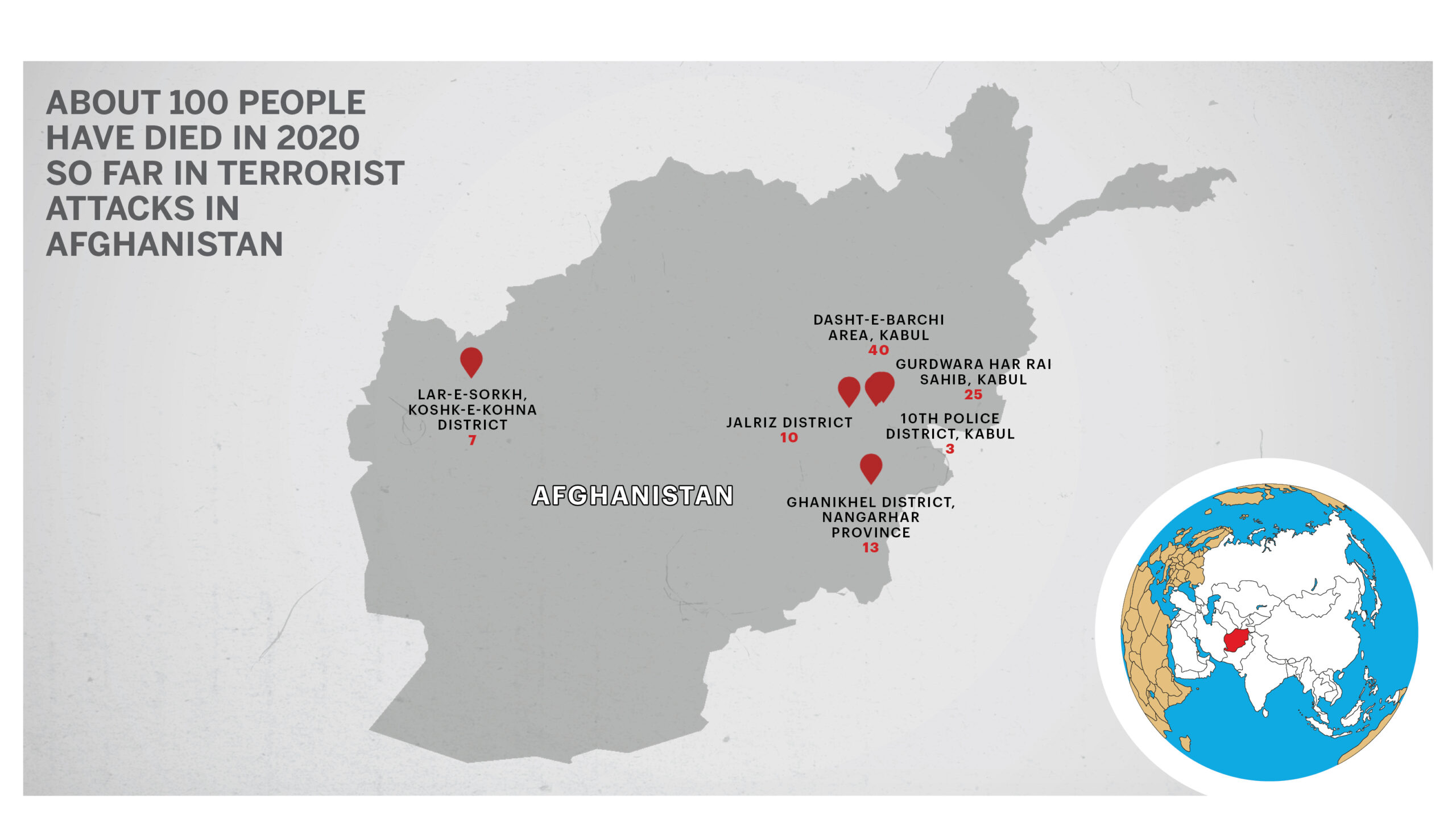 The Islamic State has repeatedly targeted Shias in the country.

The first activities of the Islamic State of Khorasan Province (IS-KP) – the South and Central Asia focussed subgroup of the Islamic State – were recorded in 2015, when a suicide bombing in Jalalabad, about 92 miles (148.06 km) east of Kabul, killed 33 people, according to the Center for International Security and Cooperation at Stanford University.

On May 12 this year, gunmen attacked a maternity clinic run by Doctors Without Borders at the Shia-majority Dasht-e-Barachi area in Kabul, killing 24 people, including women and infants. Neither the Taliban nor the IS claimed responsibility for the attack, but the Afghan government blamed the former and launched an offensive against them. The U.S. blamed the IS. The hospital was shut down after the attack.

In response to this month’s attack at Kabul University, a government press statement said: “President Ghani strongly denounced the despicable act of terror and instructed that mourning rites should be held across the country to pray for the souls of those martyred in the attack on Kabul University.

The country’s first vice-president, Amrullah Saleh, blamed the Taliban and Pakistan for the attack.

“One day V [we] will correct our intelligence failures,” he tweeted. “But the Talibs, their like-minded satanic allies in the next door [Pakistan] won’t be ever able to wash their Conscience of this stinking & non justifiable attack on Kabul uni.”

Not everyone is convinced of this competition between the Taliban and the Islamic State.

“For me, it is difficult to comprehend that the Taliban and the Islamic State do not have links,” Nisar Salih, a member of the Watandar Afghanistan party told Zenger News.  “Afghans are hoping for peace. This cannot be achieved as the Afghan government is on the defensive, but the Taliban are continuing their violence, especially in the south of the country.”

According to a United Nations Security Council report  in May, the Islamic State was nearly finished from its base in Nangarhar province of Afghanistan by the end of last year. Then the Taliban inflicted heavy losses on the group in Kunar, early this year, where it had taken refuge. 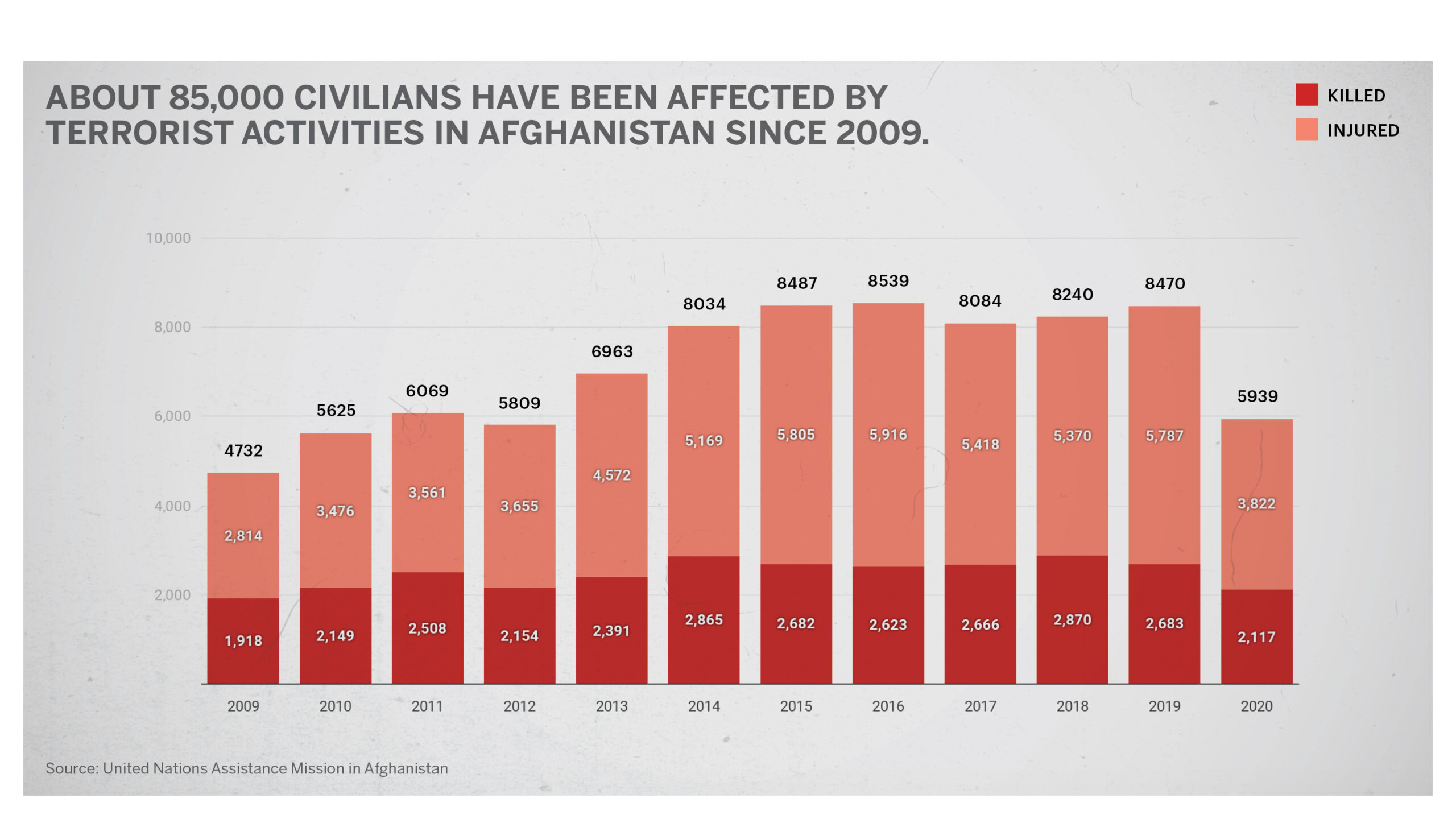 “The Monitoring Team now estimates that ISIL-K numbers are as low as 2,200 in Afghanistan,” the report states. “It remains capable of mounting attacks in various parts of the country, including Kabul, but some of those claimed may have arisen wholly or partly from a tactical accommodation with the Haqqani Network.”

Founded by Jalaluddin Haqqani in the 1980s, the Haqqani Network was funded, trained, and armed by the Central Intelligence Agency during the Russo-Afghan conflict. And till date, it remains one of the most disciplined and experienced insurgent groups in Afghanistan. Although in 1995, the network formally joined the Taliban, Afghanistan watchers believe it has kept its own structure and chain of command intact.

On July 19, 2019, a suicide bomber detonated an explosive device outside the gates of Kabul University, killing at least 10 people and injuring 30 more. In 2016, at least 13 people died and 50 others were injured when suspected Taliban militants attacked American University of Afghanistan’s Kabul campus.

Afghanistan continues to be one of the most dangerous places in the world despite a slight drop in casualty figures in the first nine months of this year, compared with the same period last year, according to a report by the UN Assistance Mission in Afghanistan released on Oct. 27.

“&mldr; The overall civilian casualty figure for the first nine months of 2020 dropped by around 30 percent compared to the same period in 2019, the report states.

“The Mission’s latest quarterly report documented 5,939 civilian casualties (2,117 killed and 3,822 injured) from 1 January to 30 September 2020. High levels of violence continue with a devastating impact on civilians, with Afghanistan remaining among the deadliest places in the world to be a civilian.”

(Edited By Siddharthya Roy and Judy Isacoff. Map and graph by Urvashi Makwana.)