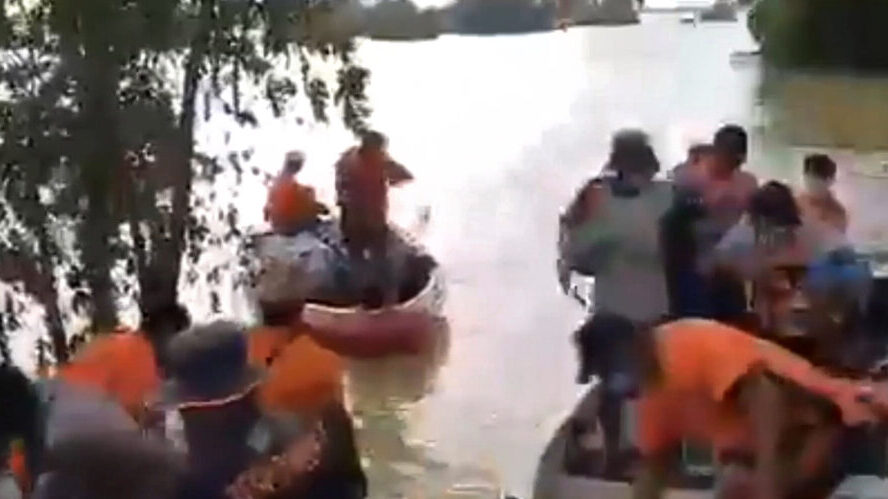 Typhoon victims arriving safely on shore thanks to the Phillipine Coast Guard in Alcala, Cagayan. (@coastguardph/Clipzilla)

LUZON ISLAND, Philippines — The Philippine Coast Guard (PCG) has been working round the clock to help people in the aftermath of the Typhoon Ulysses, which struck the island nation late last week.

The country’s National Disaster Risk Reduction and Management Council had reported 67 deaths and 13 missing persons from the storm as of Nov. 16.

The typhoon’s devastating effects were caught in videos released by the PCG in action that were filmed Nov. 15-16 in the provinces of Isabela and Cagayan on Luzon Island.

“The sick, youth, and women were a priority in the massive rescue operation that PCG conducted in those two provinces,” the guard reported.

The PCG wound up carrying bags filled with supplies on their heads to assist those affected, the pictures show.

One video obtained by Zenger shows rescued people coming to shore on a boat, as well as two bodies. Another shows the Coast Guard Aviation Force (CGAF) arriving in Cagayan with supplies. Before the sun had risen, PCG personnel were ready for the rapid distribution of relief supplies in Cagayan.

The last video shows the magnitude of the destruction, including the vast amount of flooding in the area.

(By Matthew Hall and Carlin Becker)