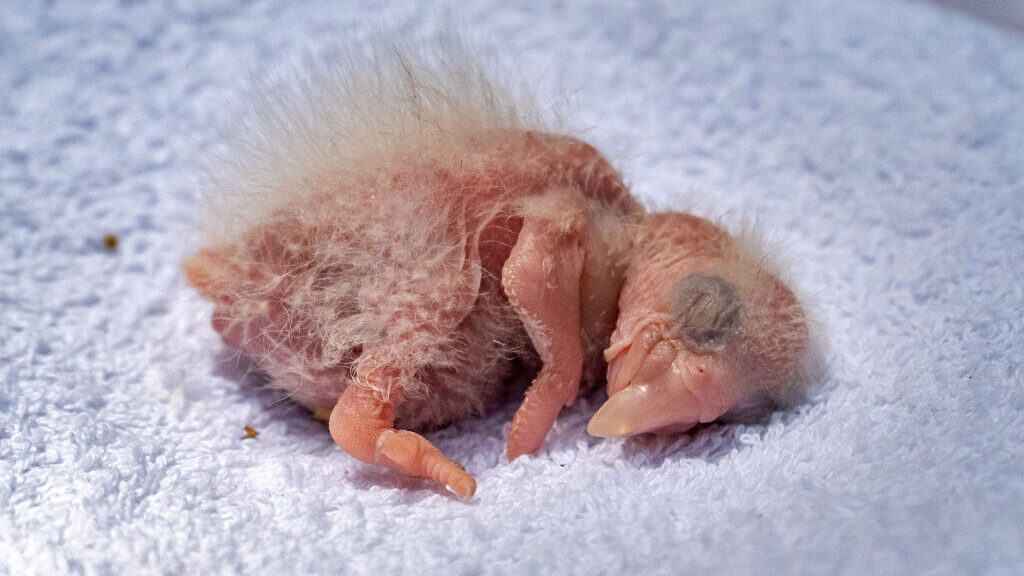 The record birth of two green-wing macaws in the wild gives Argentina Rewilding Foundation and the world hope for future. (Matias Rebak-F.Rewilding/Real Press)

CORRIENTES, Argentina— Two baby green-winged macaws were born in the wild for the first time in nearly 200 years.

Also known as red-and-green macaws, a pair named Sopa and Nioky recently managed to hatch three baby birds, though one soon died, after they were released into the wild as part of a species reintroduction effort by the Argentina Rewilding Foundation. The surviving hatchlings are being raised by their parents, and the foundation is closely monitoring their progress.

The reintroduction program began in 2015 when the foundation freed several macaws into the Ibera National Park in the province of Corrientes, which covers 395,00 acres. Director of Conservation Sebastian Di Martino told Zenger News that foundation workers now frequently see 15 of the birds flying in the natural habitat in which they were last documented in 1828.

Ten of the 15 birds have paired up, and additional hatchlings are expected to arrive soon, which would mark a “major moment” in the foundation’s grueling rewilding process.

The foundation received the released birds via donations from zoos, animal rescue centers and private owners who kept them as pets. This posed the unique challenge of having to teach the birds how to fly, as some had been kept in enclosures so small that their muscles had atrophied.

The macaws go through a long rehabilitation process before being released into the wild.

The birds need to gradually change their diets to resemble the food they can find in the wild, and they must be taught that food needs to be collected. Another important aspect is teaching them to recognize predators, as some have grown accustomed to dogs and cats.

The foundation continues to keep a watchful eye on the birds after they have been released to ensure their survival, even providing them with food until they become skilled at finding it themselves.

After two couples laid eggs last year that did not hatch, the birth of the two baby macaws gave the foundation hope that its rewilding project is becoming successful.

Macaws play an important role with the flora in their habitat. They are defined as a keystone species because they live off fruit and help spread the seeds around, thereby ensuring a healthy rejuvenation of the forest.

Di Martino explained that the disappearance of the species had a strong negative impact on the Argentinian environment, and in some extreme cases, caused local ecosystems to collapse. The foundation hopes that as the number of macaws increases, the birds will make a significant impact on nearby forests, helping to restore areas destroyed in recent decades.

The foundation also strives to help revitalize the economy of local communities by providing jobs in preservation projects and ecotourism, which would make people less reliant on the extraction of natural resources, farming and logging.

Red-and-green macaws, also referred to as green-winged macaws, were once widespread in the forests of South America, but habitat loss and the illegal parrot trade have led to a significant decline in their numbers. While listed as of “least concern” by the IUCN’s Red List, the species is critically endangered in Argentina, where hunting, changes in land use and the pet trade have dealt a blow to the population.