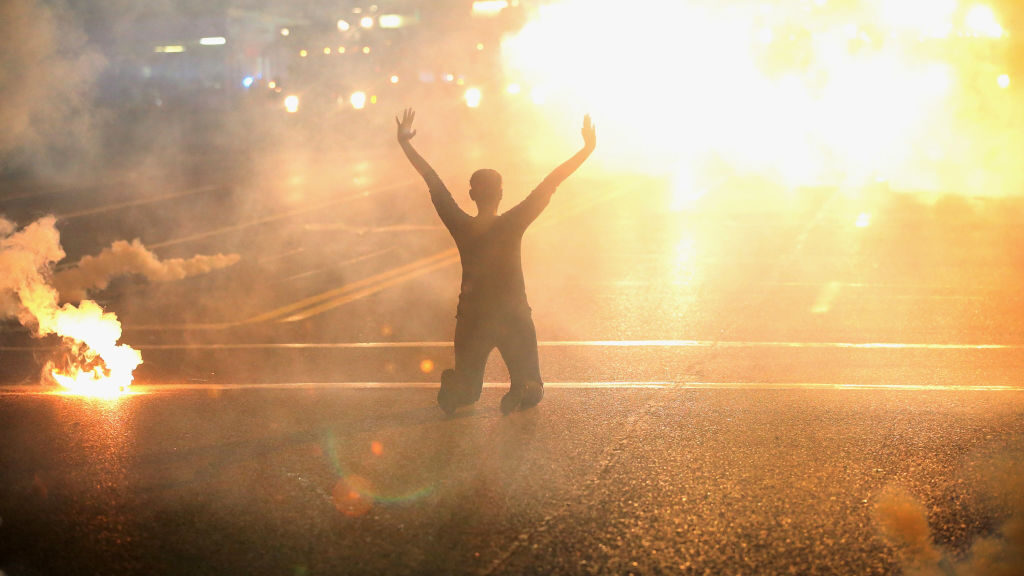 New documentary, "What Killed Michael Brown?", illuminates new narrative on historic Ferguson conflict.(Pictured: Tear gas reigns down on a woman kneeling in the street with her hands in the air after a demonstration over the killing of teenager Michael Brown by a Ferguson police officer on August 17, 2014 in Ferguson, Missouri. (Photo by Scott Olson/Getty Images)

Shelby Steele, a senior fellow at Stanford University’s Hoover Institute, has long raised the hackles of progressives with his views on race relations, multiculturalism and affirmative action. His new documentary What Killed Michael Brown?, a collaboration with his award-winning filmmaker son Eli Steele, turns the culturally dominant view about the unarmed black teenager’s death on its head.

“We wanted to understand what really happened in Ferguson. What did it mean for us as Americans?” Eli told Zenger News. “And why had Americans responded to Ferguson the way it did? These questions about America’s response to Ferguson—not the actual shooting of Brown—were really what drove the focus of our documentary.”

The Steeles believe their conservative politics led to Amazon Prime Video initially pulling the plug on the documentary, which was slated to begin streaming on October 16. Amazon later reinstated the film.

“The film … is a unique take on race relations in the U.S. because it asks questions Black Lives Matter would not allow, for example, ‘Is Michael Brown in any way responsible for his own death?’” Steele said in a statement. “When Amazon decided to cancel [the film], they let themselves be captured by white guilt. Amazon doesn’t want justice for blacks, as they claim. They want the look of racial innocence attached to their brand.”

Amazon told the Steeles in an email that their film “doesn’t meet Prime Video’s content quality expectations” and that the company “will not be accepting resubmission of this title and this decision may not be appealed.”

Amazon did not respond to a request for comment.

On screen, Shelby Steele stands in front of the Canfield Green apartment complex, just feet from where Michael Brown was killed and left in the street for four hours, while a narrator sets the tone: “Groups pass on their identity to their young by telling them cautionary tales, ‘Watch out for the whites.’ So if you’re black and you step outside of any of these apartments and see Michael Brown’s body … at that moment, before any evidence or witness testimony, all you can see is a victim of American racism.”

Steele’s unconventional approach is questionable, according to one scholar who argues that when black Americans talk about racism every individual has an individual story.

“Dr. Steele makes a long-standing argument that blacks are complicit in their own suffering,” said Dr. Donn Worgs, a political science professor and program director for the African and African American studies program at Towson University in Maryland. “It’s troubling to see people discount black people’s personal, lived experience. Any journalist worth his salt could go into [a black neighborhood in Ferguson] and talk to the people, and no doubt they’d all present different perspectives on how racism has touched them.”

Worgs says Steele is wrong to blame liberalism for Brown’s death, calling it a case of bad policing. That view is shared by the U.S. Department of Justice. “Black Lives Matter is a genius concept because it is critical of police violence and the systematic dehumanization of black people,” Worgs said. “Whether Brown committed a crime or not, he did not deserve to die. It’s not enough just to not kill innocent people; the police should not be killing guilty people either.”

The flip side of black victimization is white guilt, Steele says.

When U.S. Attorney General Eric Holder went to Ferguson in August 2014 to investigate Brown’s death, he came as both the nation’s top law enforcement official and “also as a black man,” leading some to believe his agenda was set beforehand and the Obama administration was already aligned against the Ferguson Police Department.

“Eric Holder came to Ferguson as an envoy of the Black Power movement, but there was no evidence of white racism in the shooting of Michael Brown,” Steele says in his film. “Where did he find the momentum to go on? I think it was white guilt. Since the ’60s, whites have lived under the accusation that they are racists. Thus, there is a compulsion to prove their innocence of racism. This compulsion is white guilt; it is not actual guilt.

“For Holder, it wasn’t just [police officer] Darren Wilson who pulled that trigger; it was the thousands of other officers dating back to the oppressions of slavery and segregation. The weight of all of that history is the measure of systemic racism today.”

“Back in the ’60s, we blacks made a very bad deal with America. We demanded that America help us develop,” he said. “But if that was logical, it was also naive. It seduced us into putting our faith right back into the hands of the same white America that had oppressed us in the first place.

“The liberalism that insists on Michael Brown being a victim of racism also makes him an invisible man. We have no chance to know what really ailed him when he arrived at that profoundly bad decision to slam his fist into the officer’s face, wrestle him for his gun and make that final, fateful charge at Officer Wilson. I don’t believe racism drove Darren Wilson to shoot Michael Brown. I think the motive was so simple as to be unbelievable: He feared for his life.”

Despite initial allegations that Brown poetically surrendered, hands in the air, before Wilson shot him dead, an investigation later proved that “Hands up, don’t shoot” was a fabrication.

Holder’s report concluded “that Ferguson police officers routinely violate the Fourth Amendment in stopping people without reasonable suspicion, arresting them without probable cause and using unreasonable force against them.”

Black Conservatism in the Arena

Steele does have supporters who stick their necks out routinely to stir America’s race discussion.

“Black Lives Matter doesn’t give a damn about blacks. They care about a narrative based on Marxism and being an adjunct of the Democratic Party,” said Clarence McKee, a former Reagan administration official and author of How Obama Failed Black America and How Trump Is Helping It. “If you don’t think like they do, you can get blacked out in much of the mainstream media and corporate America. They do know how to make people feel guilty.”

Like the Steeles, McKee is a critic of “Critical Race Theory,” an academic discipline that drives much of today’s race politics.

Steele’s son, Eli, agreed. “The problem with the systemic racism argument is that it comes out of the Critical Race Theory, which demands that everything be viewed through racial lenses. While racism may explain things in some cases, it is often the exception and not the rule,” said the younger Steele.

Shelby Steele believes Amazon risked a massive backlash by trying to silence him, and predicts both ends of the political spectrum don’t like when billion-dollar technology companies play favorites.

“Political pressure is building on the left, which dislikes Big Tech’s success and size; and on the right, which resents its leftward bias in suppressing cultural messages it doesn’t want people to hear,” said Sandye McIntyre, an IT and management consultant.

“Amazon Prime Video isn’t a journalistic enterprise/news media outlet; it’s a content and distribution platform,” McIntyre said. “The leadership of many media and tech companies are biased, either toward the left or the right, but all are biased toward financial benefit, risk aversion and long-term survival.”

McIntyre also believes online platforms have an obligation to ensure they’re not providing a platform for misinformation and disinformation.

“The progressive roots of the Black Lives Matter movement have been falsely recast as violent, anti-American anarchy,” he said. “It’s possible that Amazon didn’t want to be complicit in smearing the movement … by streaming the documentary.”